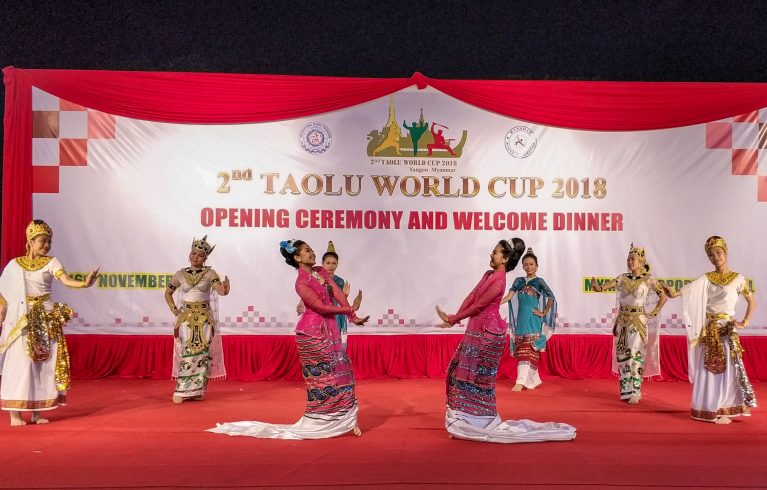 The opening ceremony of the 2nd Taolu World Cup was held in Yangon, Myanmar on the evening of November 15 at the National Stadium. Eighty-eight athletes from 21 countries and regions proudly watched their flags hoisted high on the stage following a stunning display of traditional Burmese dance and music.

IWUF Executive Vice President Anthony Goh welcomed all the athletes, officials, and special guests, and spoke of the significance of this event. The President of the Myanmar Wushu Federation, Bo Bo Li, gave a fine speech in which he stated that this Cup will help to promote wushu on the international stage, bring Myanmar into the world sports spotlight, and help raise up the next generation of wushu athletes. Other distinguished guest speakers also celebrated Yangon’s historic role in holding this prestigious wushu event.

The ceremony was followed by a delicious banquet featuring fine Burmese cuisine and delightful traditional music accompaniment. The teams enjoyed socializing and anticipation was high for the competition to start tomorrow morning.

The 2nd Taolu World Cup can be seen live streaming on IWUF’s Youtube channel, with the following schedule.