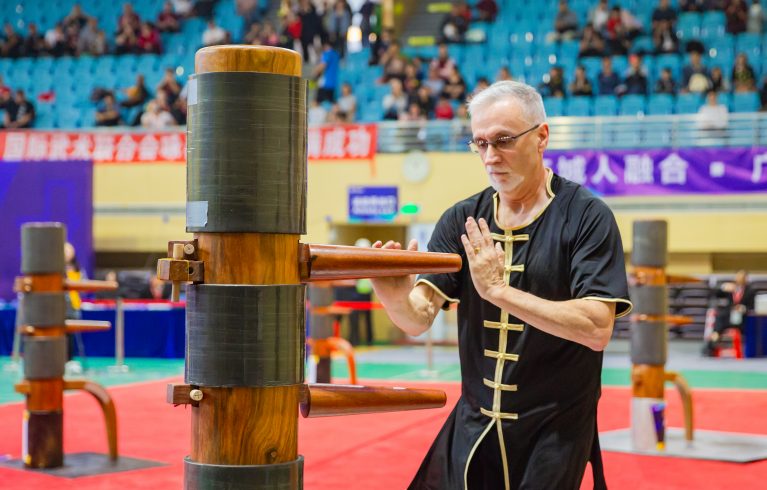 The 2018 World Wing Chun Competition unfolded with great excitement in Foshan, China over the weekend of December 1-2. With competitors from countries and regions all over the world, the event focused exclusively on the Wing Chun system and its different lineages. This was not only a success for the International Wushu Federation, but also a positive step toward a future where all practitioners of Wing Chun can test their skills in competition judged by Wing Chun judges. This inaugural event was conducted under the guidance of the International Wushu Federation and organized by the Chinese Wushu Association, the Guangdong Wushu Association, and the Foshan High-tech Zone Management Committee.

Excitement grew as Day 1 began  in Shishan, the center of the Foshan High-tech Zone, with Wing Chun free fighting. Wushu enthusiasts might recognize this as being somewhat informed by the sport of sanda in terms of the competitors’ equipment and raised platform on which the bouts were held. However, this event distinctly belongs to Wing Chun, with fighters receiving specific scores for performing recognized Wing Chun techniques. The crowd cheered as two-hand techniques scored a pair of points, single-handed punches landed one point each, and successful foot sweeps brought in one point; efficiently blocking an opponent’s technique earned points too. This particular application of martial skills provided a great way to test the rules against a large and diverse field of competitors; it also gave spectators a thrilling sight to behold, as enthusiasts watched the techniques many of them knew well come to life in the ring. It was clear from the first bell – competitive Wing Chun free fighting will become even more exciting as it grows in the future.

Finally, the chi sau competition was a crowd favorite, drawing huge applause and cheers of excitement. This two-person event was either fully choreographed by two partners, completely free form, or a blend of free form with predetermined techniques. Unlike competitive chi sau, this format gave the practitioners a platform to fully demonstrate the best chi sau their style of Wing Chun had to offer.

The second day of competition started early with the sparring division and the weapons forms. All had large fields of competitors. The wooden dummy field included men, women, boys and girls, offering excellent performances. Scoring was tight and a gold medal in this event was won or lost by .02 points.

The bat chum do competition was also very interesting for all those in attendance. With representation from so many lineages, there was equal representation of different styles of swords. It was great to watch the different uses, techniques, interpretations and styles.

There was also fine representation in the long pole form competition. It allowed the spectators to realize that there is more in common between the families and styles of Wing Chun than differences. It was also notable to see the common threads and discussion afterward bringing people together.

The sparring event continued to provide a stress test for the rules as competitors from other styles entered the event. It was valuable to see how the rules could be interpreted to allow techniques that did not align with the nature of Wing Chun or spirit of friendly competition. With updates to the rules pending, the organizing committee is optimistic about being able to represent Wing Chun’s fighting nature in this event.

To cap off a great event, the closing ceremony was held at an outdoor venue in perfect weather. The energy was high at the medal ceremony, and awards were presented by members of the organizing committee. With the outstanding talent represented, it was gratifying to see athletes with gold, silver and bronze medals celebrating their victory. As the event drew to a close, the spirit remained high, and friends old and new snapped photos capturing this remarkable Wing Chin celebration — and through social media this news was soon traveling around the world. Many are looking forward to the next event, which may ideally springboard off the success of the 2018 World Wing Chun Competition  to continue the development, promotion and growth of Wing Chun around the globe.