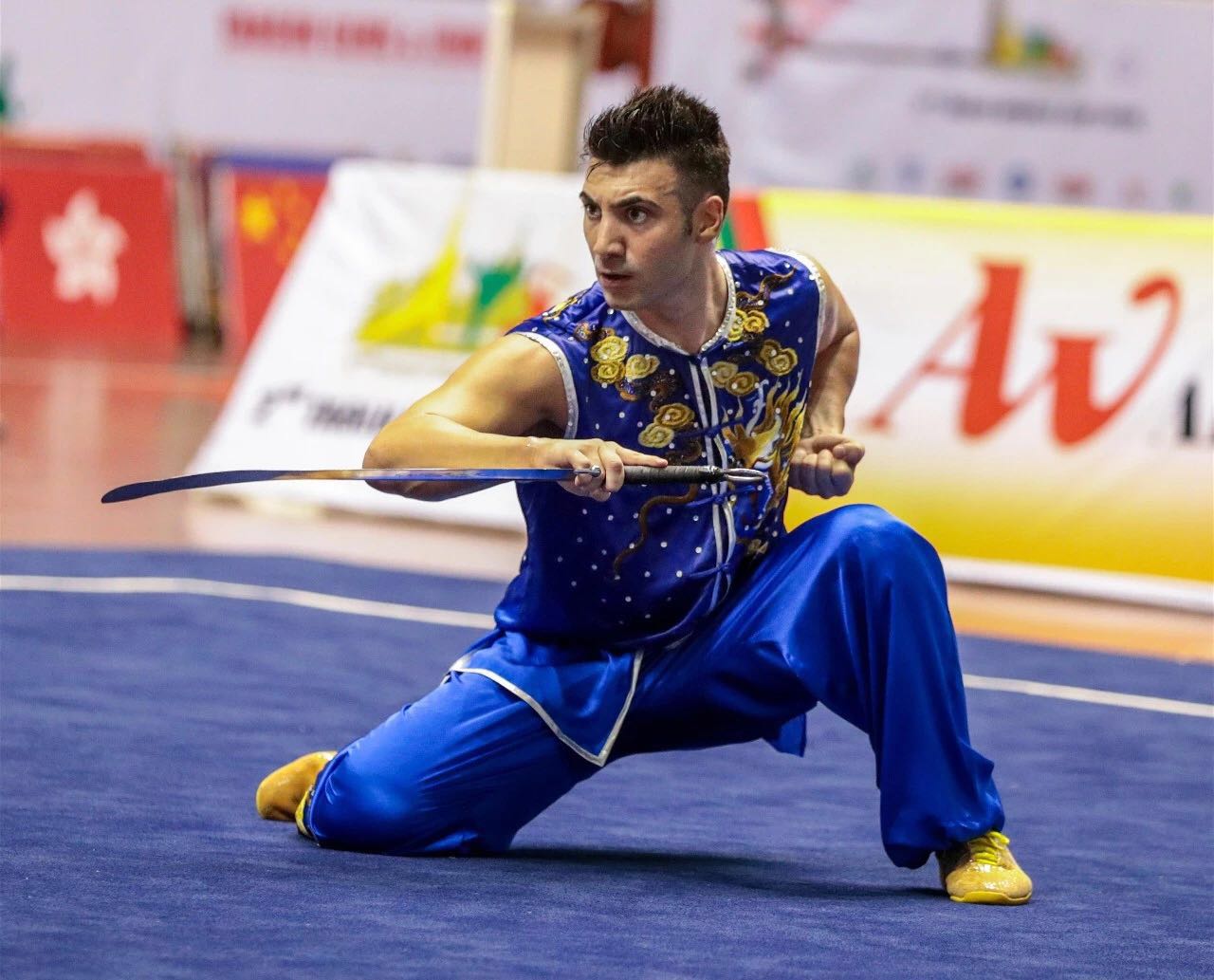 In Southern Italy near Salerno, in the small town of Baronissi, Michele Giordano makes wushu his life’s passion. Surrounding his town is the stunning Amalfi coast where summertime is often spent playing soccer by the sea. But Giordano, who trains six days a week, doesn’t mind giving up beach time for wushu routines on the carpet of the gym he runs with his father, Bruno Giordano, who has taught wushu for 40 years.

“It’s not easy when your father is also your coach,” says Michele, “but when there is passion it is easy to train, and teach. He’s the reason I fell in love with this sport. He gave me the opportunity to train in China to understand what is really wushu, and during training he always encouraged me to do my best.” At their gym in Baronissi, the Giordanos teach wushu, sanda, fitness and body building. Michele trains every day with his brother Domenico. He says, “I started wushu when I was five, because my father is a wushu teacher. I was very young and I started for fun and because I liked jumping. My father is the only coach that I’ve ever had. He’s a person in love with martial arts.” 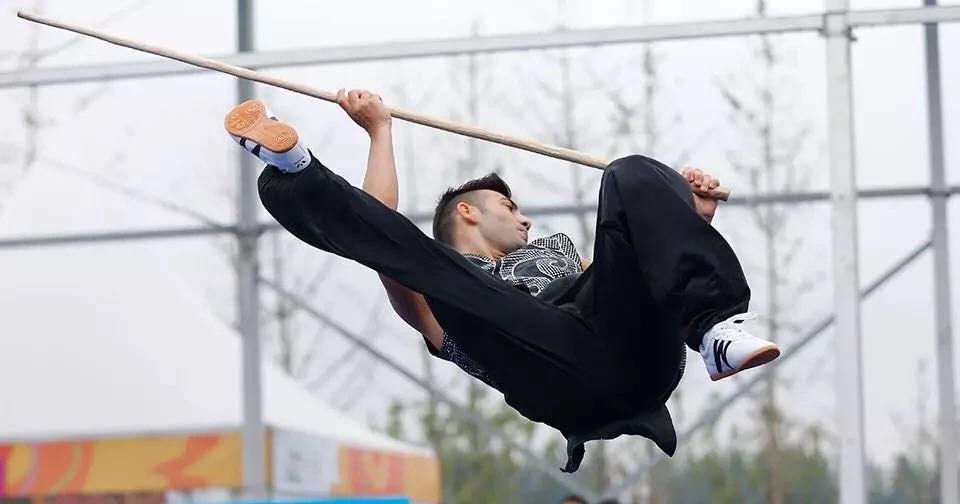 “Here in Italy,” Michele says, “although wushu is a minority sport compared to soccer, we are gaining success promoting it to more and more young athletes with the Italian Wushu Federation. We have a dedicated group of coaches helping to spread wushu in more regions of the country.” Michele himself teaches children aged 5-10 at his wushu school, and since 2014, he has been an international judge. At 33, Michele is the senior member of the Italian national wushu team. He competed for the first time in 2002, when he was 16, in the European Wushu Championships in Portugal. His first World Championships followed in 2005 in Vietnam. He was 19. One of Italy’s proudest moments was when Michele competed in the Beijing 2008 Wushu Tournament, where he took seventh place. 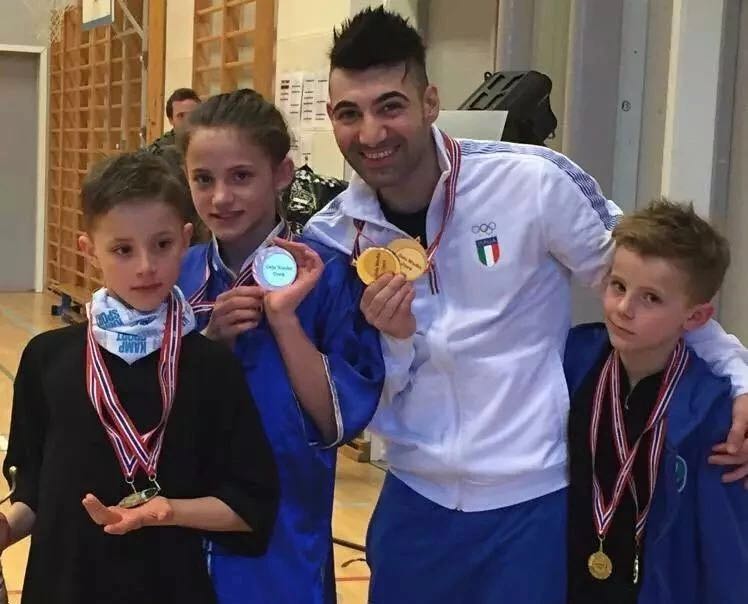 “Our national wushu team is a good group,” Michele says with a broad smile. “We don’t see each other that much during the year, but at competitions we become very close, both the taolu and sanda athletes. Having my brother travel with me on the national team is also great, and we‘ve always shared the same hotel room, since 2008.”

Many athletes around the globe come to value the experience of wushu competition because of feelings of camaraderie, brotherhood, and belonging, not only with their own teammates, but also with other athletes from different countries.  When he was invited to participate in Nanjing at Sports Lab, Giordano was thrilled to reunite with longtime wushu friends, and also to make new ones. “Of course I know the other European athletes well, like Daria from Russia, and Oleksii from Ukraine. We all have a long friendship.” He continues,  “But it was also great to meet the athletes from the USA. My hotel room was opposite Justin (Benedik) and Mario (Martinez) and our doors were always open as if it were one big room. Immediately there was a good feeling between us, and we joked and laughed all the time in those two weeks. They really helped me improve my English too!” 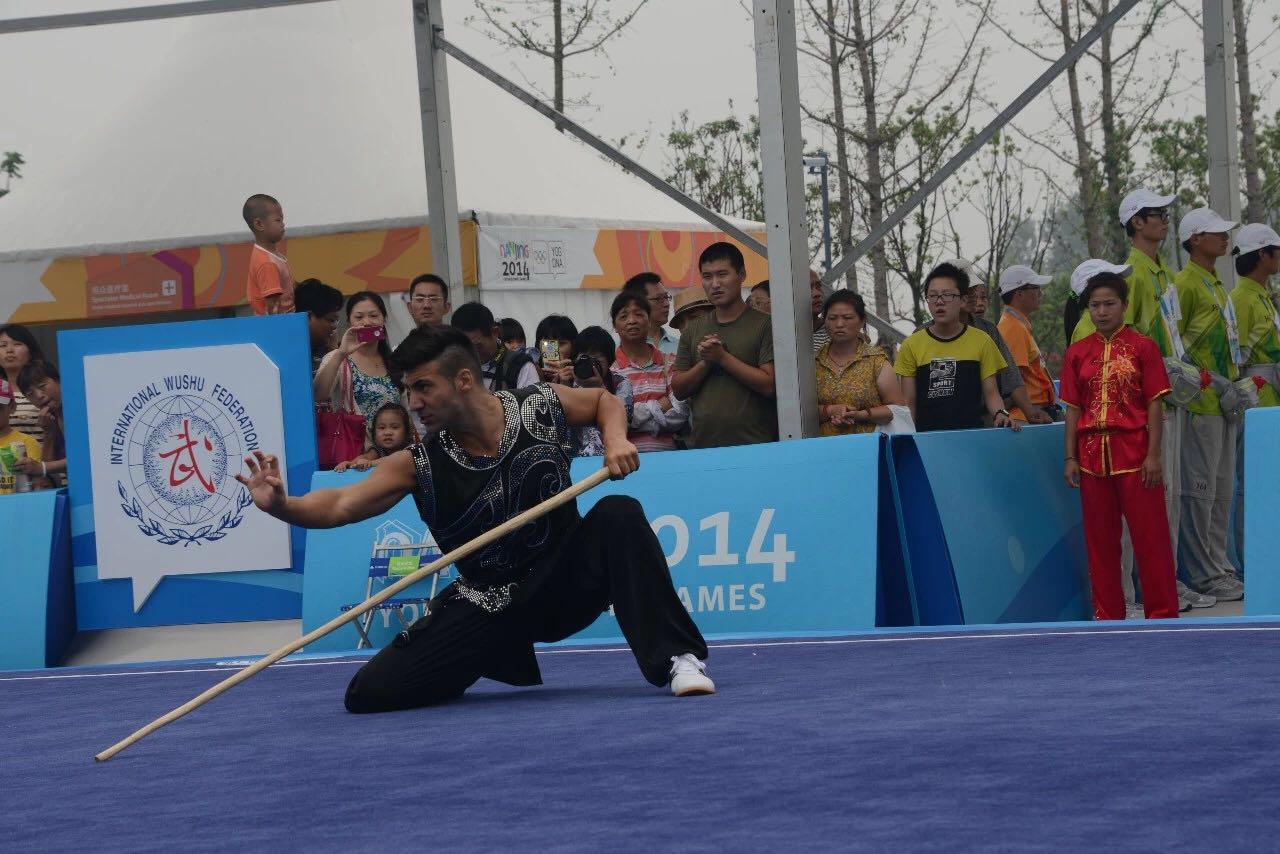 All the athletes participating in Nanjing’s Sports Lab found this watershed Olympic event to be transformative in one way or another. Michele found it especially so. “When I was first asked to participate in Sports Lab of course I said yes,” he says, “but I didn’t know what to expect in Nanjing.  I really didn’t imagine the kinds of intense emotions this experience would create. But the feeling was amazing, it was like a dream. As I said before, in Italy wushu is not as big as soccer, but in China I was treated as a star — there were interviews every day with different media, volunteers were always available to help, and we signed hundreds of autographs. So many people came to our wushu exhibition, and it was nice to show the Chinese that Westerners are good at this sport too. To be there – it was one of the most beautiful things I’ve done.” 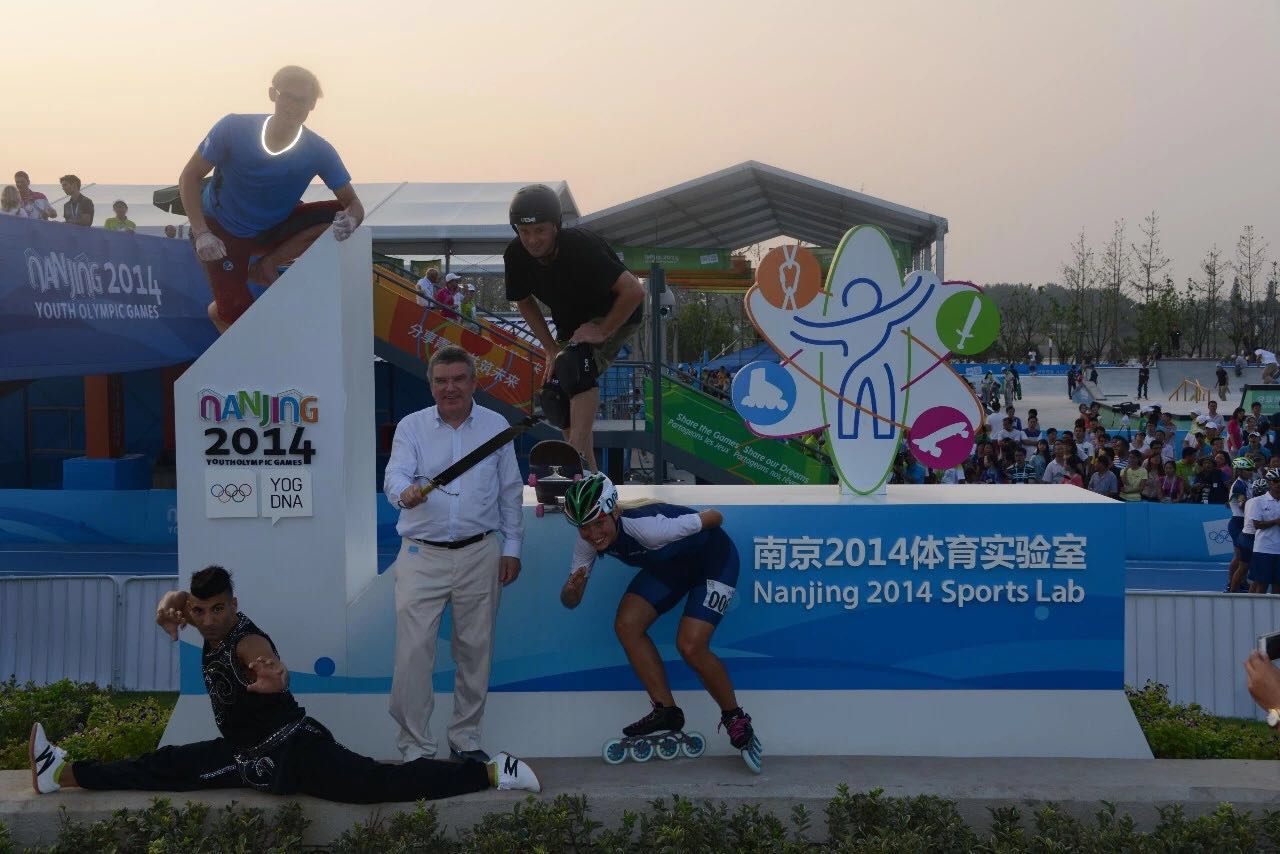 After the cool sea breezes of Amalfi, Nanjing in July was undeniably hot! “We sweated a lot in the sun,” Michele admits with a smile, “but we pushed hard in those weeks like never before. Of course, with President Bach we knew we had a great opportunity and we just wanted to make a good impression. And after we took a photo with him I got even luckier – the Sports Lab people took me for pictures with him and three other representatives of the other sports. During that session President Bach took my nandao in his hand an asked me how to hold it in the right position. That was memorable.” 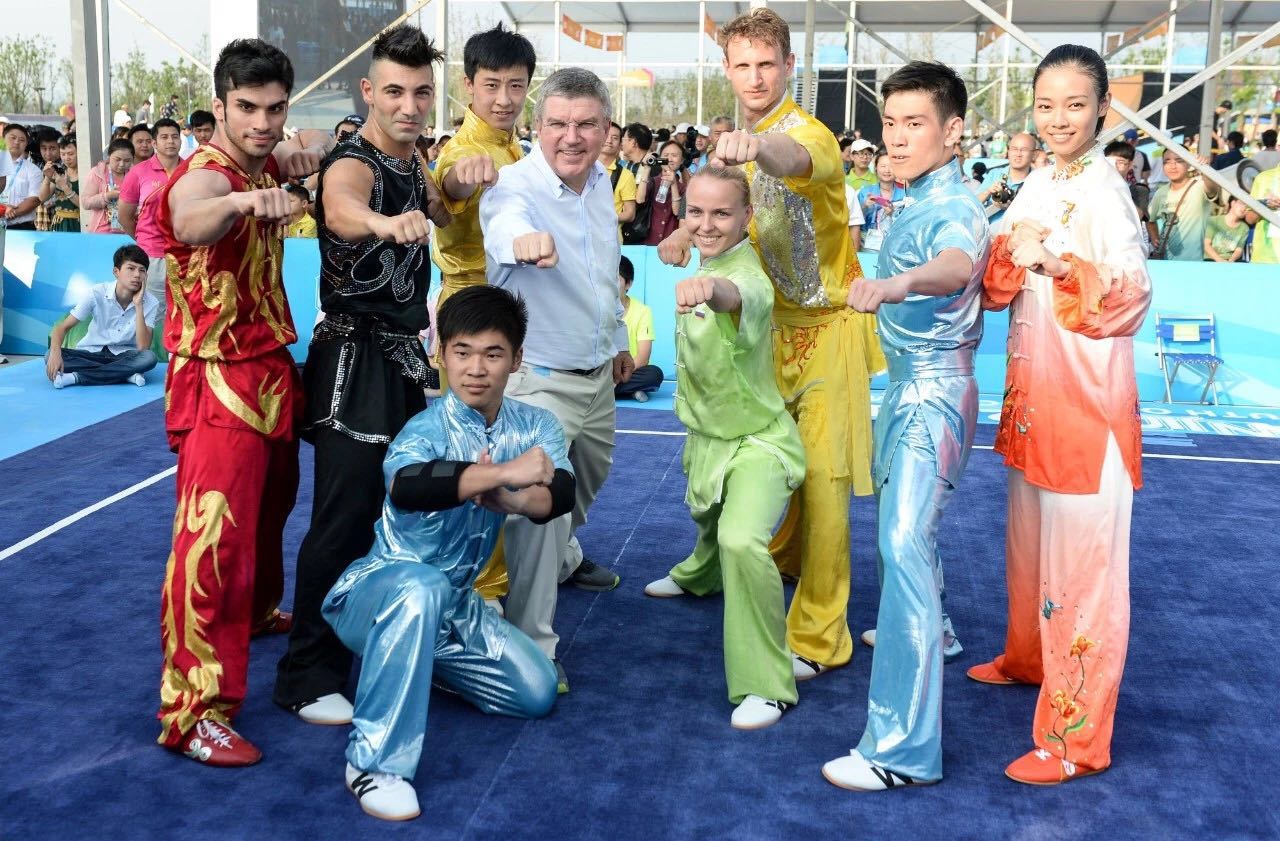 When asked about trying the other Sport Lab sports – skateboarding, roller sports and sport climbing – Michele laughs as he remembers. “In Nanjing I tried climbing,” he says, “and I was not bad — but with roller sport I had big problems like never in my life — it was my first time feeling I was uncoordinated.”

On the wushu carpet, however, Michele displays exceptional power, strength and style. “I specialize in nanquan, Southern boxing,” Michele explains. “I started when I was ten because my teacher thought it was the best style for me. I like the power I have to put into every movement, and of course the jumps. Nandao (sword) is my favorite to perform, because when I go really fast I feel the speed and power at the same time.” 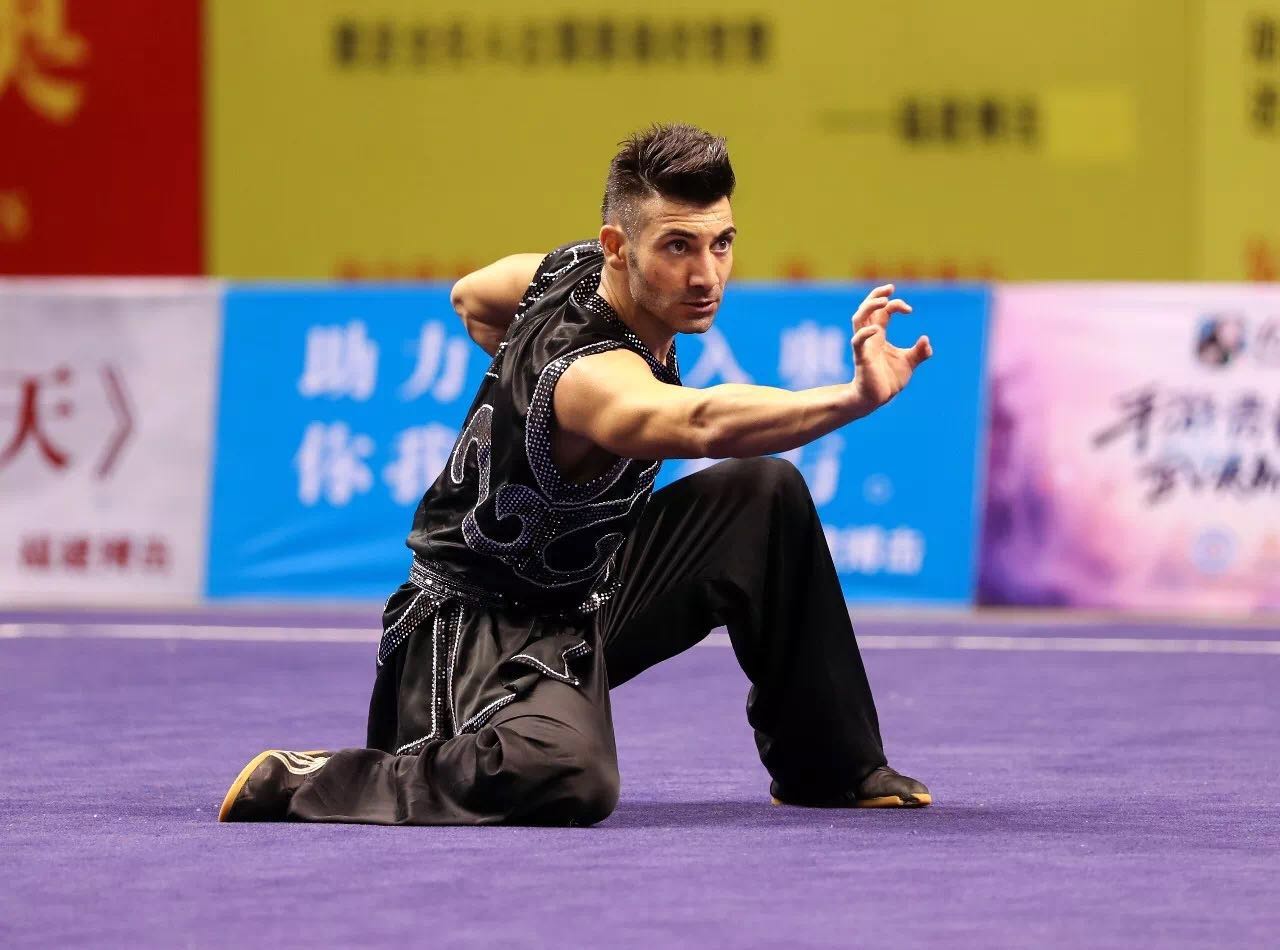 Michele’s long competition career has been a proud moment for Italy.  At the 12th World Wushu Championships in Malaysia in 2013 he took ninth place in all three of his routines – nanquan, nangun and nandao – but he was determined to do better at the next World Championships. “The dream was to win a medal,” he says, “and I trained hard for that. I’ve been in the top 10 many times now, but I want to do better.” In Jakarta in 2015, his sixth world championships, Michele leaped closer to his goal. He won 8th place in nanquan, 7th place nangun, and 5th place in nandao. And, he won a different sort of prize – qualifying to represent Italy for the inaugural Taolu World Cup. “I was so happy to be qualified to the 1st Taolu World Cup in all 3 events,” he says happily. “I didn’t expect it, but the last 2 months before competition spent in China training did really give good results, especially with the help of my Chinese coach from Chengdu, Yu Bo.” 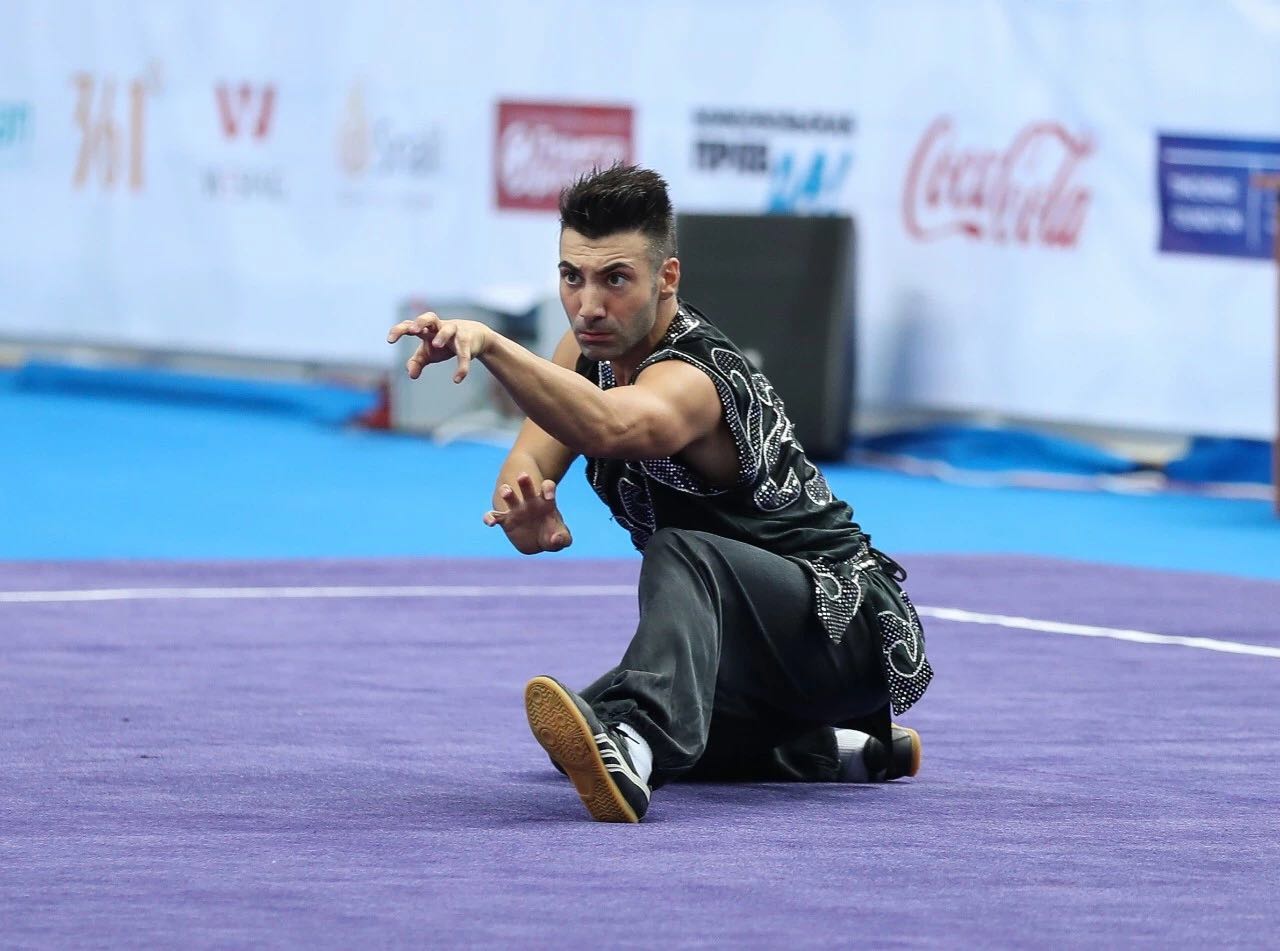 In that debut Taolu World Cup Michele indeed lit up the carpet. He won 4th place in nandao, and two bronze medals – one each in nanquan and nangun. “I think this wasn’t even in my dreams to have a day like this,” he says. “In a couple of hours to win a bronze medal in a competition with the top athletes in the world. I knew before to do nanquan in that category was so hard, and I was the only one who was not an Asian athlete. I qualified with the 8th place so one of my goals was to work hard just to not finish last, and then really I was relaxed, and enjoying the competition. But feeling this actually gave me the power I needed not to make mistakes, and when we finished the category, I didn’t believe I had won third! After, a lot of people started to call me from Italy, my parents and friends, and I knew that I had a lot of support because everybody watched my competition even though the hour was very late back home. After my second bronze medal in nangun, I started to believe that I did something so good for my country and I was very, very happy.”

Subsequently, Michele has continued to shine on the international stage, making audiences cheer with his stylish and powerful performances. He became a European gold medal champion at the European Wushu Championships in 2016 and 2018. At the World Wushu Championships in Kazan in 2017 he won 10th in nanquan, 8th in nangun, and 6th in nandao, and again qualified for the second Taolu World Cup in Myanmar. 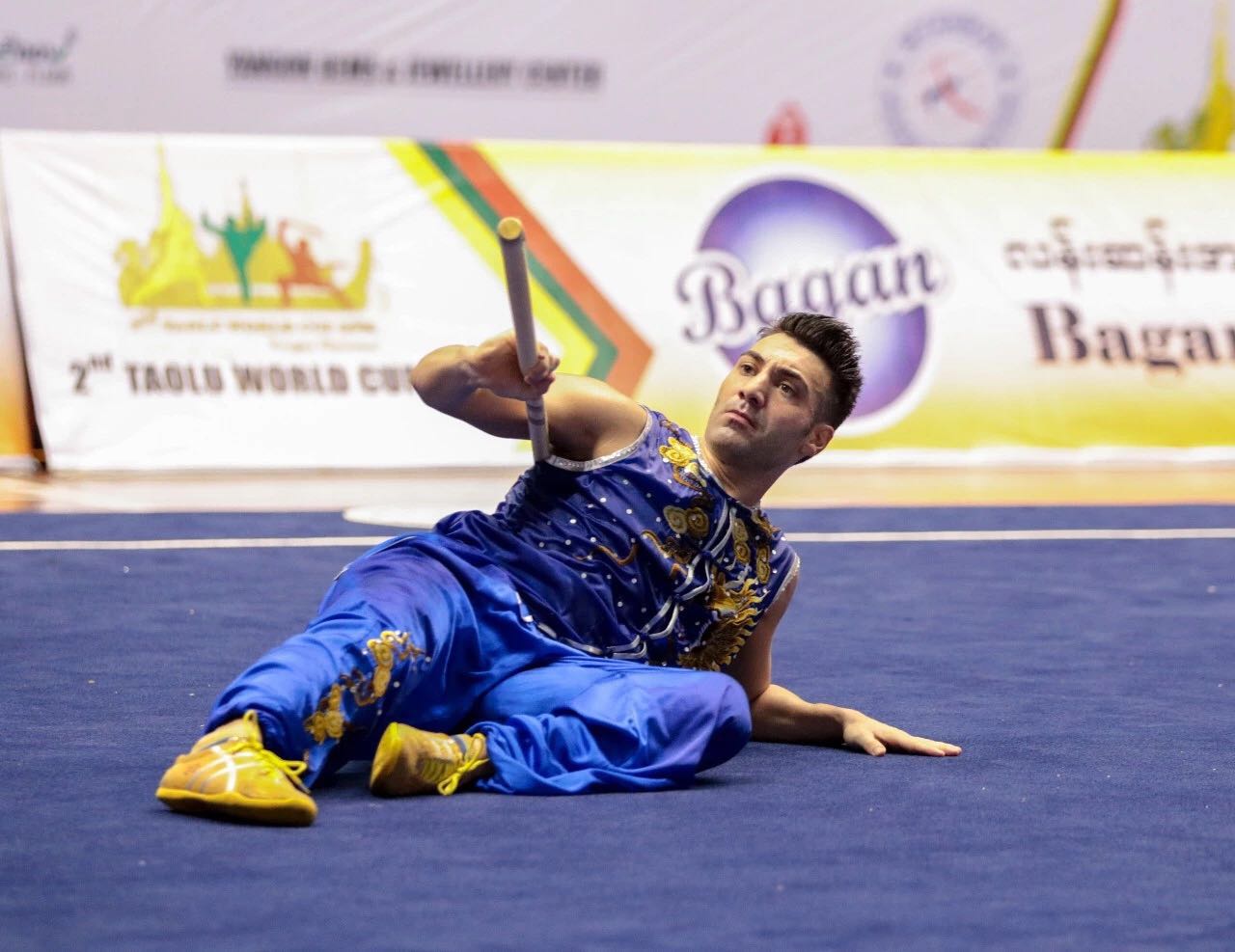 There, however, misfortune struck when all his baggage, including his weapons and outfits, were lost by the airline. Michele notes, “In this competition I had some problems since I lost my baggage at the airport, I was sad to not compete with my wushu suit that was more than 10 years old – for my entire career I only competed in that one suit.” However, he focused on the competition, borrowed competition clothes and equipment, and turned in a beautiful performance. “I was happy,” he says, “I had a good score in nandao, 9.61 and took 6th place, and 8th in nangun.”

In Kazan it was inspiring to see him compete with his brother, constantly offering support, positive energy and enthusiasm. They will return to Shanghai for the 15yh World Wushu Championships in 2019. “I have already started training intensely for Shanghai 2019 with my brother Domenico,” says Michele. “We know it will be a hard competition, so we need spend a lot of time training and preparing as well as possible this competition.”

What are Michele’s Italian training secrets? “I eat lots of fruits and vegetables,” he says, “but of course in Italy we have many kinds of pasta, so every day there is something delicious, and especially good food when my mom cooks. I don’t have a problem to say that pizza is my favorite food!” 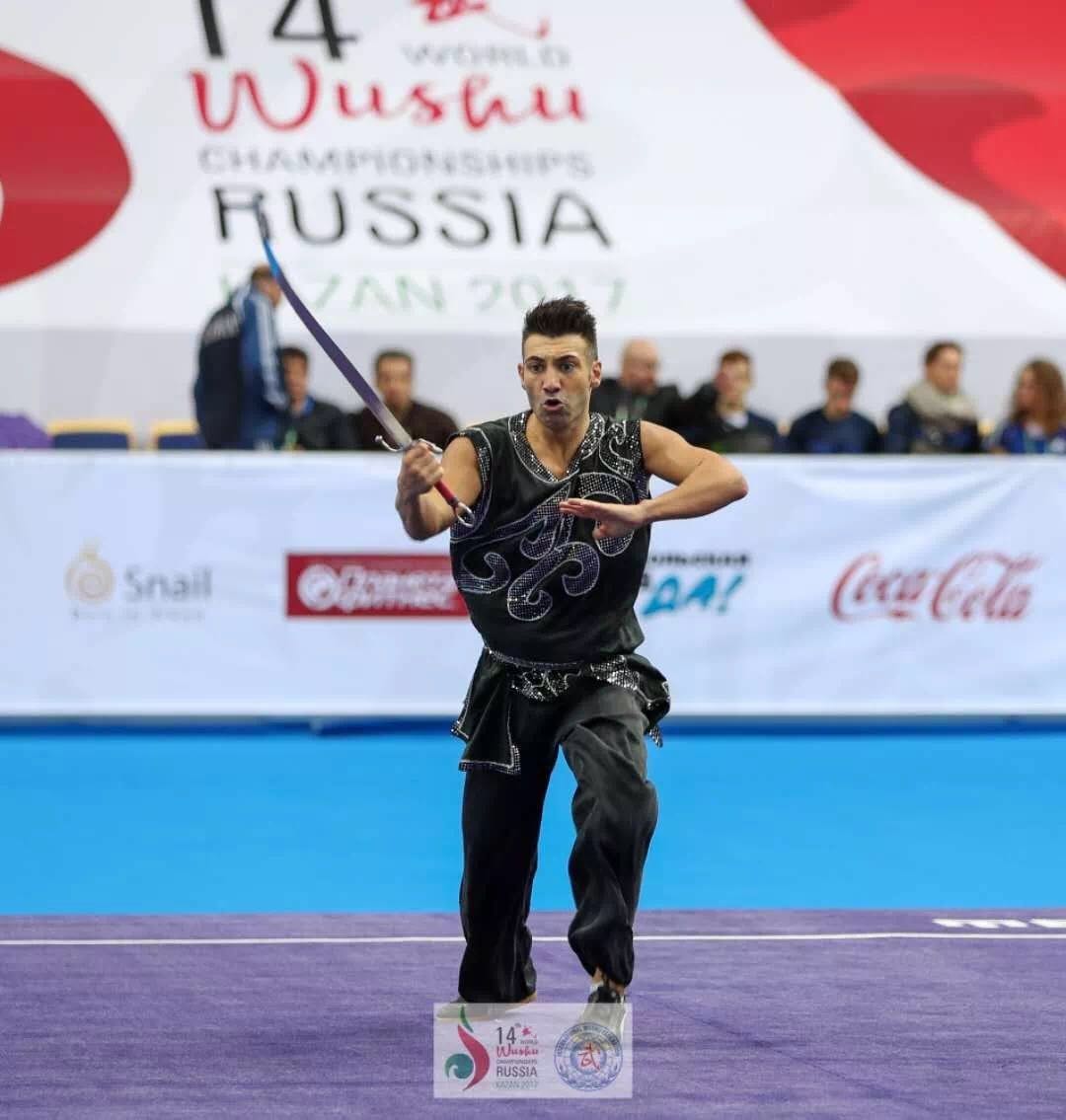 Michele adds, “Usually for training I like listening pop or rock music like Linkin Park, Sum 41, or Rise Against. Music that can give me a charge. When I’m at home I also like Eminem or Coldplay. When I’m not training in wushu I like to play badminton, and of course when I can I play soccer with my friends, especially on the beach. I enjoy reading thrillers, and I like the author Dan Brown.  When I was young my dream was becoming an archaeologist, and still I have this passion — so I love everything concerning archeology, whether it’s documentary films, books or travel. That’s my priority. The only thing I love more is wushu.”