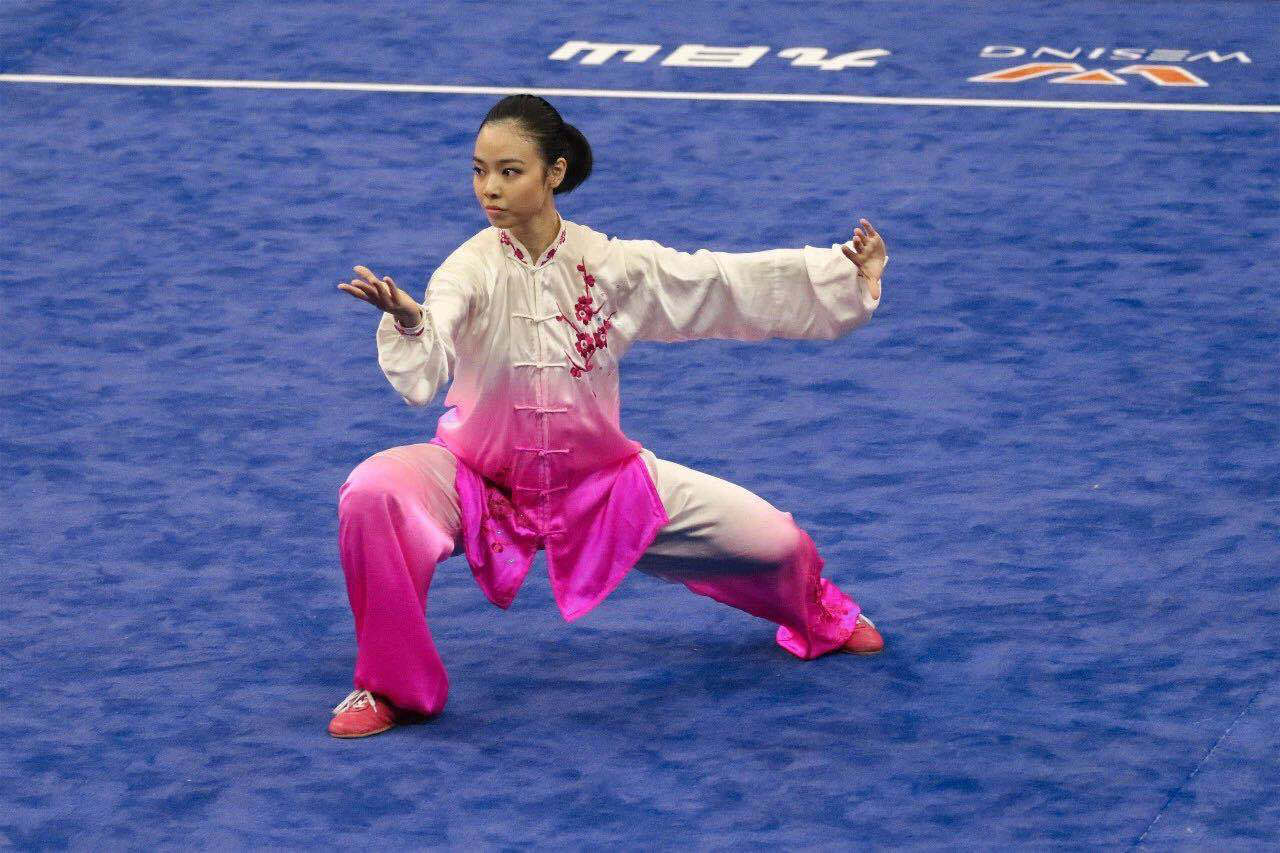 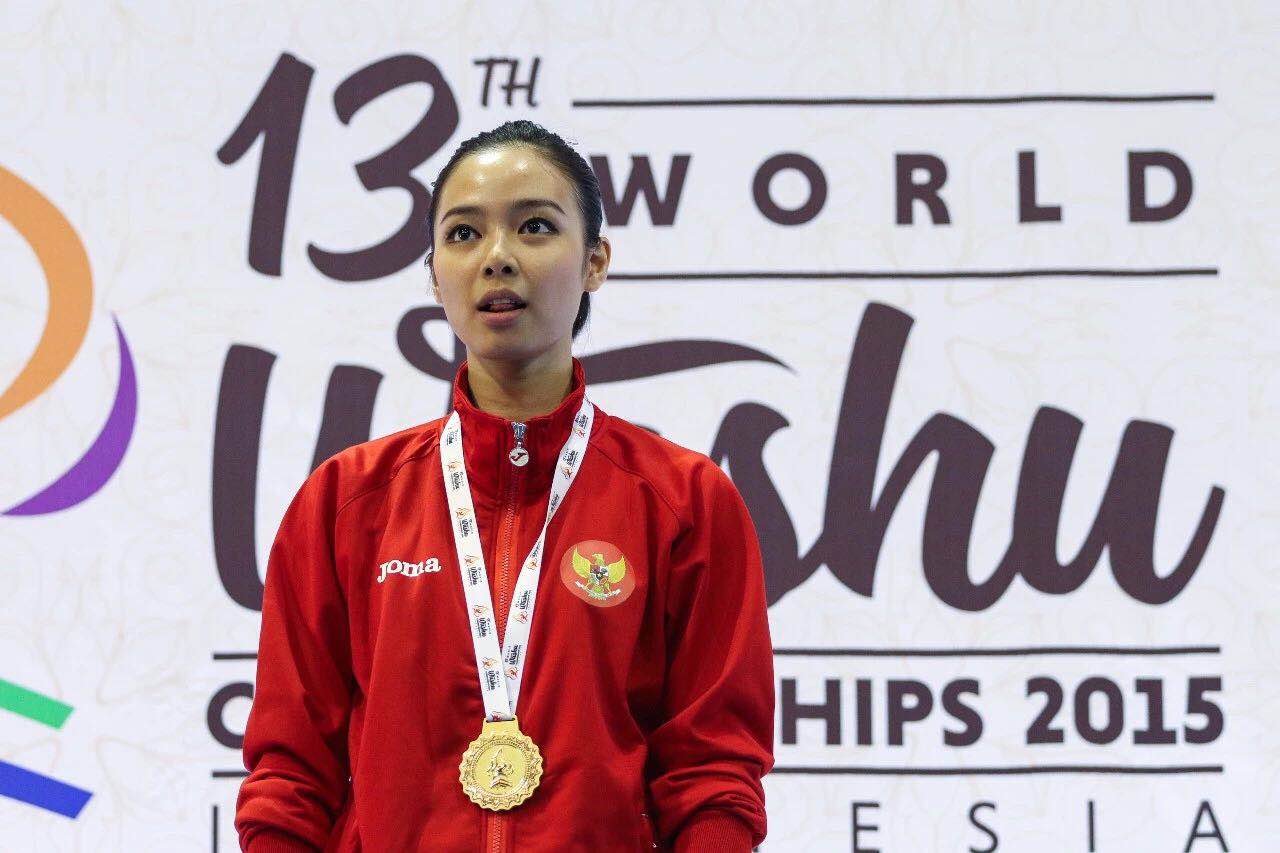 When taiji athlete Lindswell steps onto the carpet a certain magic falls over even the biggest arena. With a combination of ethereal grace, precise yet soulful technique, and dynamic power, this young Indonesian star has risen to the top of the international podium numerous times to take home the gold. Still, when she was just a kid starting out, maybe a bit unwillingly in taiji, little did she know it would someday bring her face to face on the world stage with her generation’s biggest martial arts hero, Jet Li.

“I started learn wushu from my brother Iwan when I was 9 years old,” Lindswell says, recalling, “I didn’t like taiji then – I liked changquan – it was cool.  But I practiced taiji more seriously as I got older, and the more I learned it, the more I liked it. My teacher, Supandi Kusuma, really made me an athlete, and he believed in me. I fought for it because of him. He hoped I would become a champion, and I wanted to prove to him that I could, and make him happy and proud.” 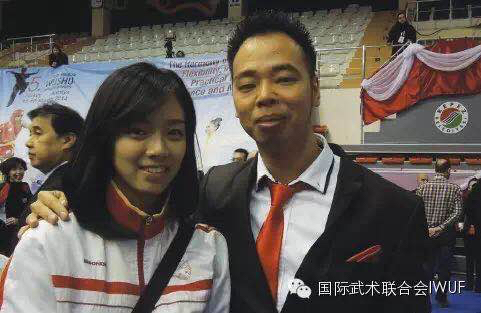 In 2006 Lindswell went to her first international event, the World Junior Wushu Championships in Malaysia, where she won a silver medal. Her appetite was whetted, and she returned two years later to Bali for the next junior event where she took a gold and a silver. Then she exploded onto the elite taiji scene in Canada in 2009 at the 10th World Wushu Championships where she won a bronze and a gold, and won another silver, narrowly edged out by China in Ankara at the 11th WWC. 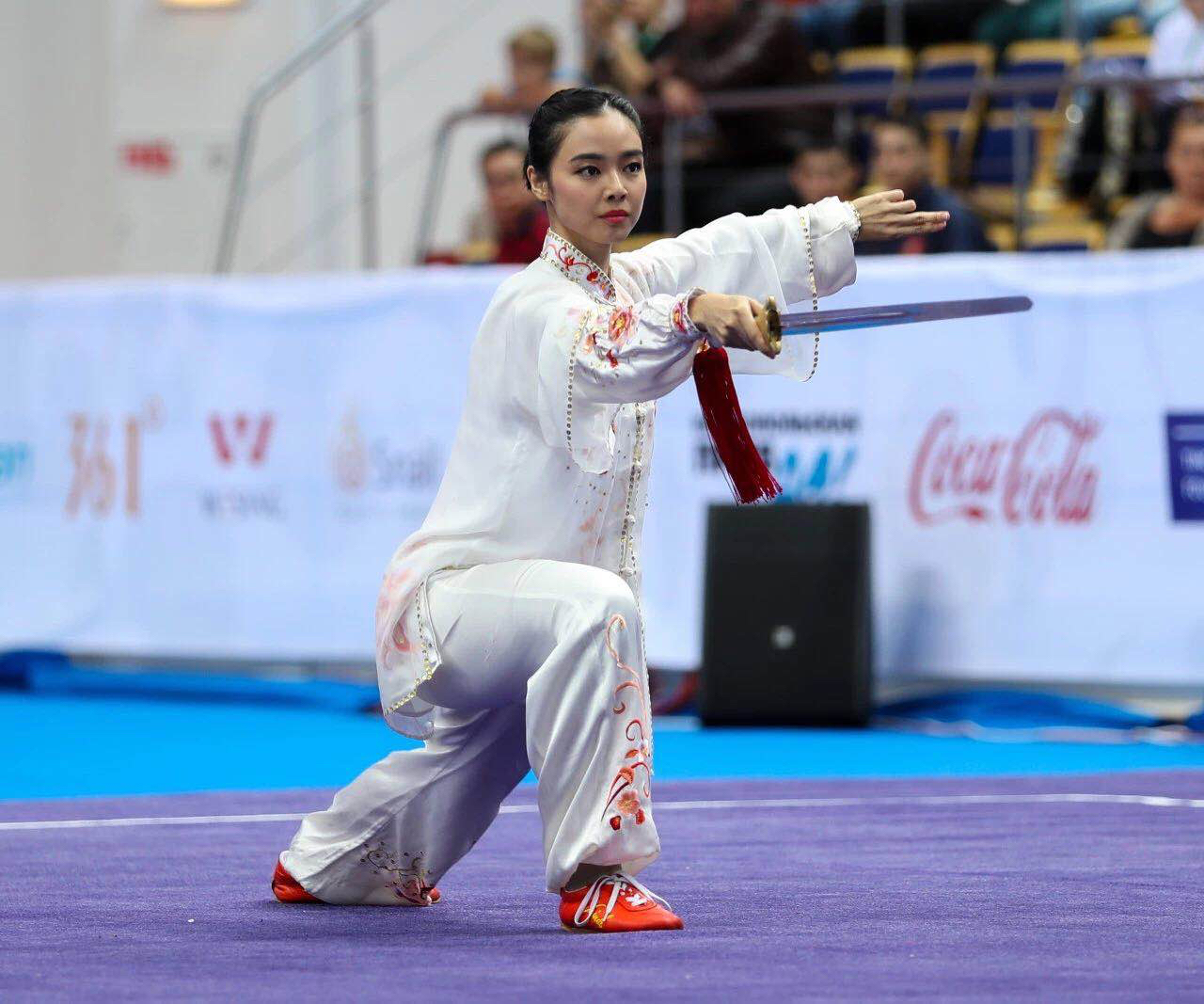 Some victories were elusive, and at the Asian Games in Incheon, she got fourth place. “I fell,” she explains. “Sometimes in the air you don’t know where you are, you lose yourself. The next Asian Games I wanted to win – the Asian Games are big. I want it not just for myself, but also for my country.”

Lindswell’s greatest challenge is, like in many world-class athletes who make it look so easy, overcoming nerves and stage fright. She remembers at the 2011 Indonesian Games: “I was scared and nervous, and the audience was loud and wild. Slowly I’ve learned I can turn this energy into good things, and I can handle it better. I’ve known both failure and success. I don’t think about gold medals when I’m performing, I just want to do my best. Even if I’m not first place it’s OK; it’s better if people think I’ve done well.” 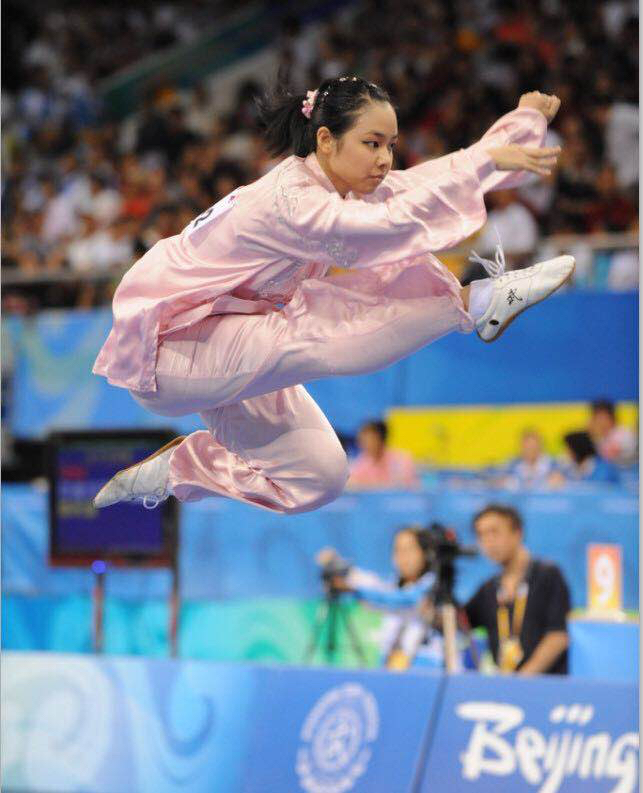 Still, sport competitions are also intertwined with national pride, and a uniquely profound experience of winning is seeing your flag raised on the podium, and hearing your national anthem played for everyone to hear. “When I see the Chinese team,” she notes, “or the Malaysian team, I think I’m not as good – it makes me work harder than before. I want them to also say ‘Indonesia!’ when they think of champions.” And indeed, at the 12th World Wushu Championships in Kuala Lumpur, the Indonesian national anthem rang out into the arena when she won gold medals in Taiji Quan and Taiji Jian. Just a week before she had also won gold in both Taiji Quan and Taiji Jian at the World Combat Games in St. Petersburg. 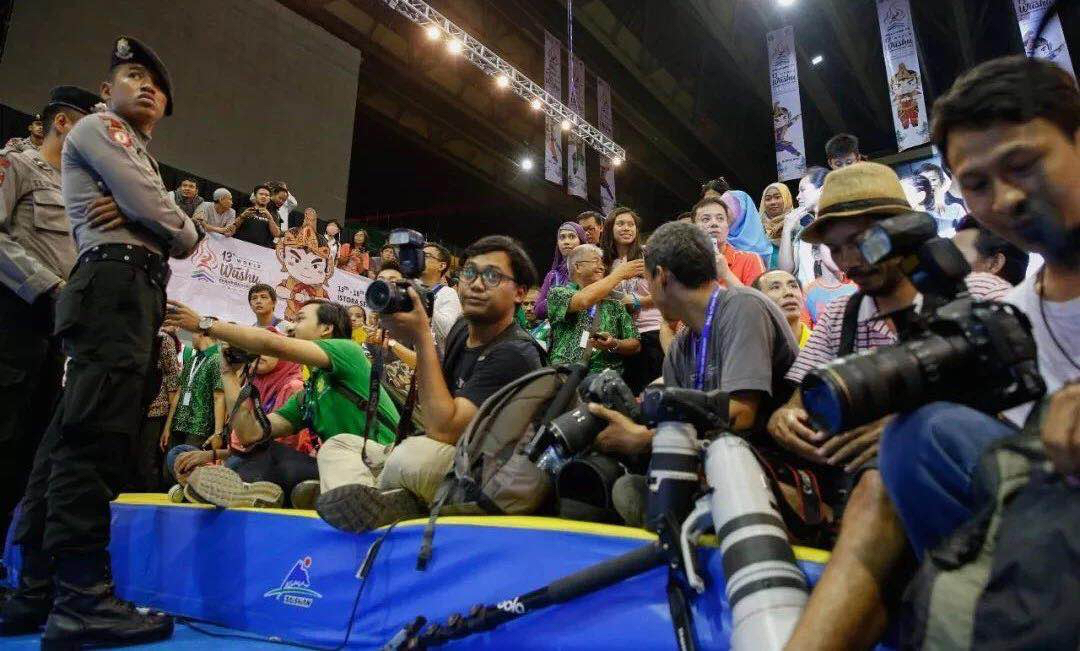 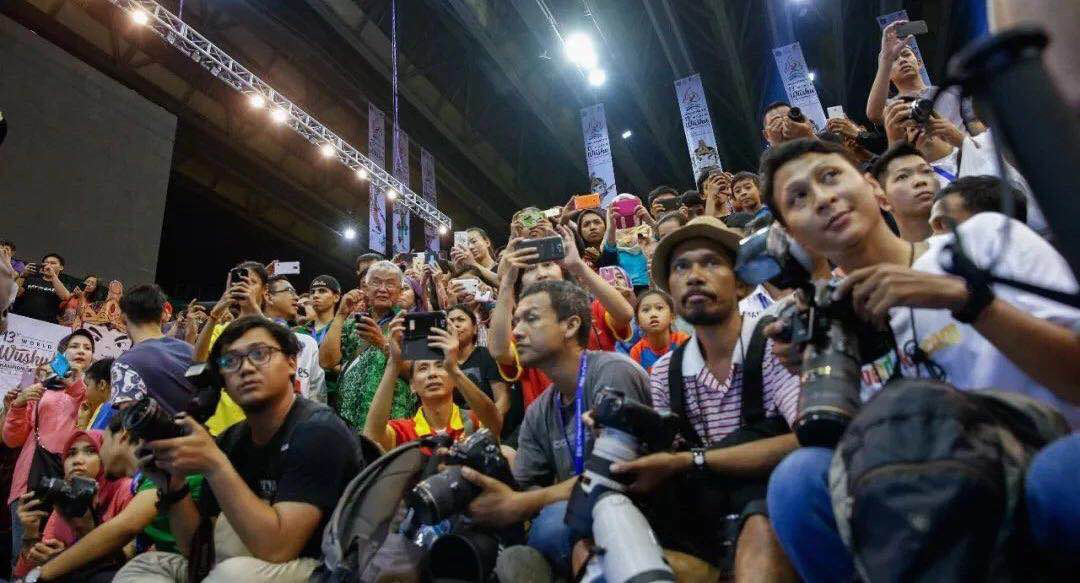 Before she knew it, suddenly there was pressure. Why? Because Indonesia won the bid to host the following 14th World Wushu Championships in 2015. Now she had to defend not one but two gold championship medals. The eyes of her country were watching as dozens of reporters crowded the packed arena on opening day in Jakarta. Her family was watching, her coach was watching, and taiji quan was the first event. Oh, and special guest star Jet Li was in the audience too, and he would give out the first medal of the Championships. Talk about nerves. 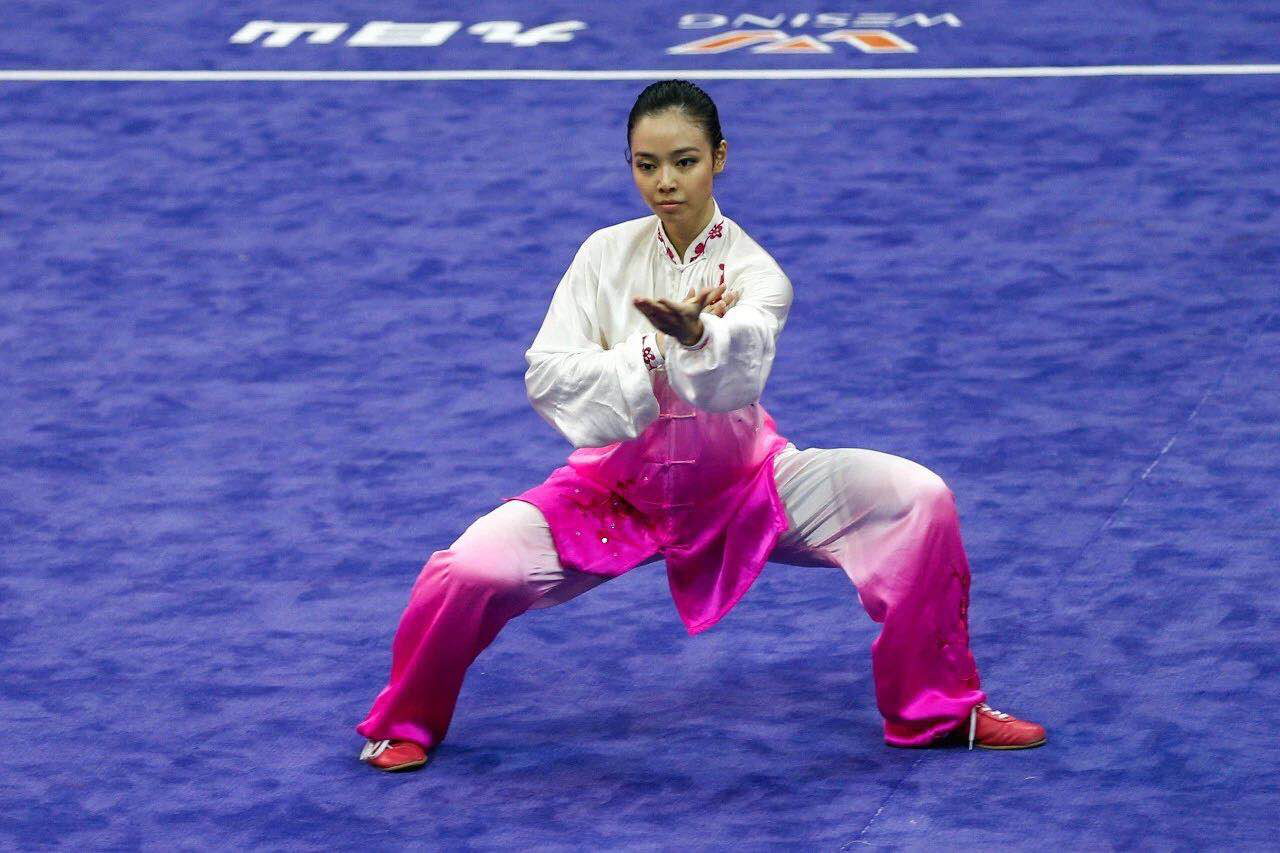 Lindswell’s family, friends, and fans held their breath as she took to the carpet. Could she really beat the star taiji athletes of Hong Kong and Malaysia? The energy was electric, and her performance flowed like water. Those few seconds waitung for the score seemed like eternity but then the scoreboard confirmed it – she had won first place. The stadium burst into mad cheers and applause – Lindswell, and taiji, had brought down the house. 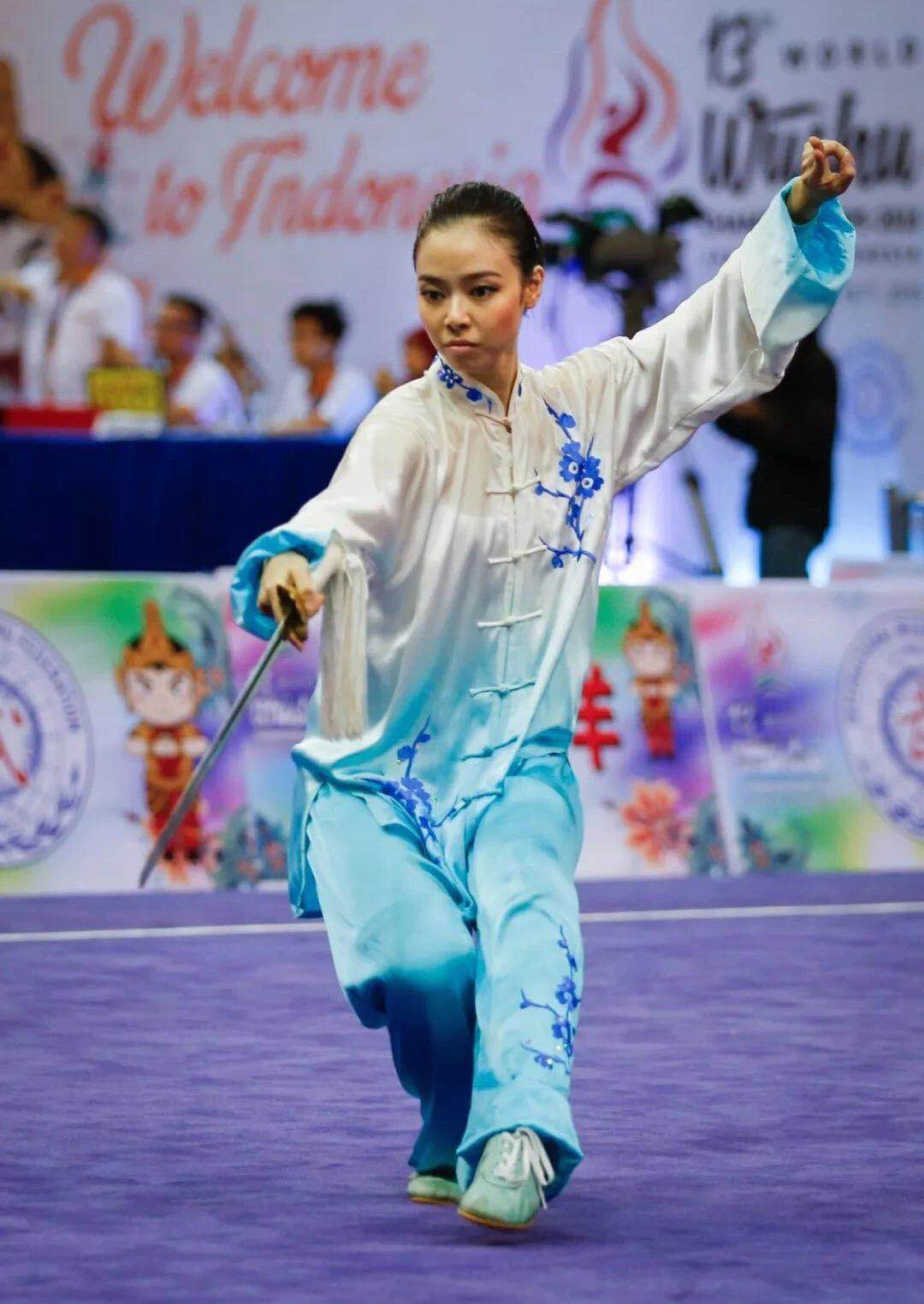 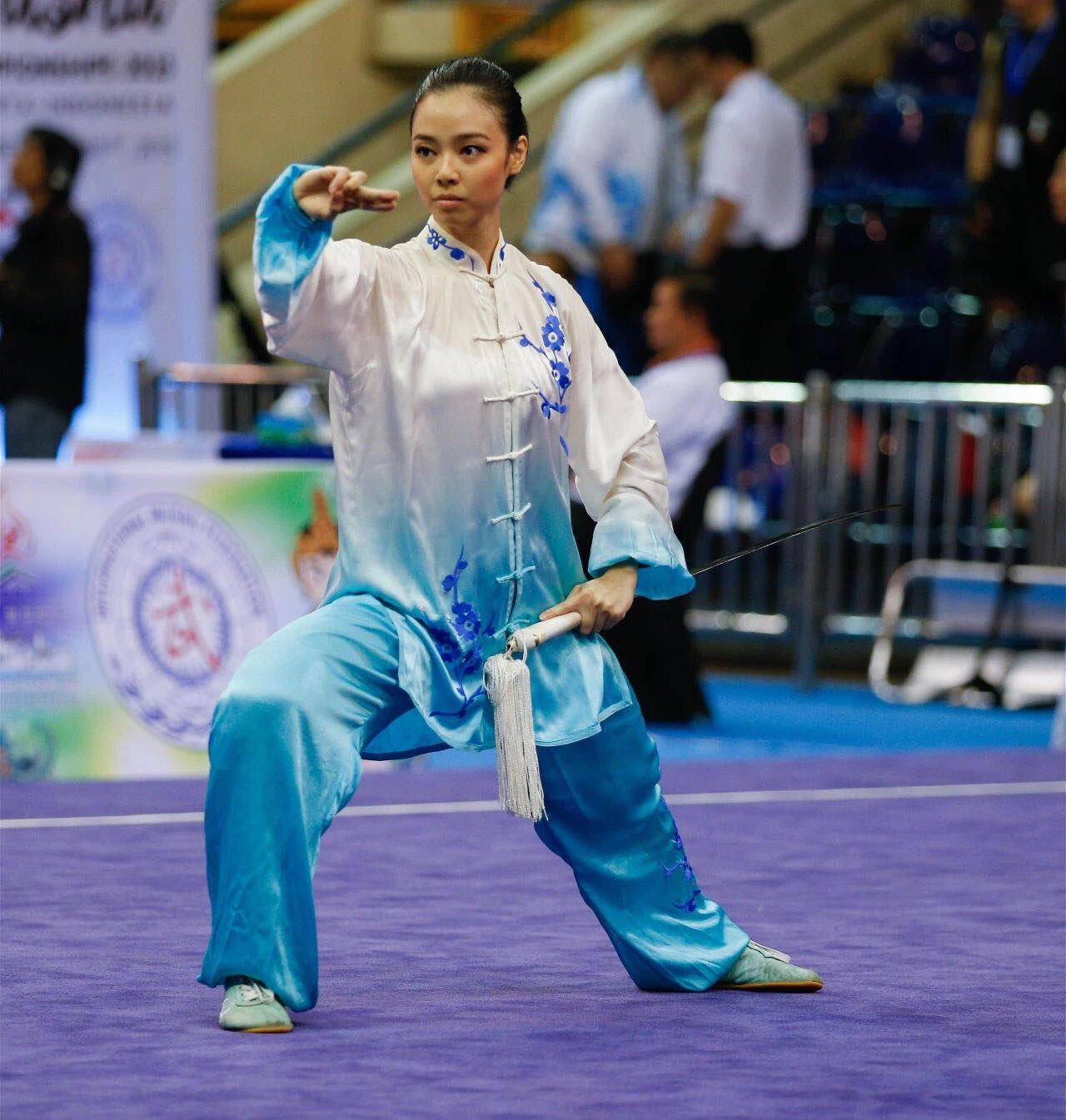 Moments later, a beaming Lindswell was stepping to the top of the medal podium and received the first gold medal of the 13th WWC from Jet Li himself. As the Indonesian flag rose, crowds in the stands sang along to their national anthem “Indonesia Raya.” It couldn’t have been a more jubilant moment. And to make it even sweeter, she won gold again in the folowing taiji sword event. 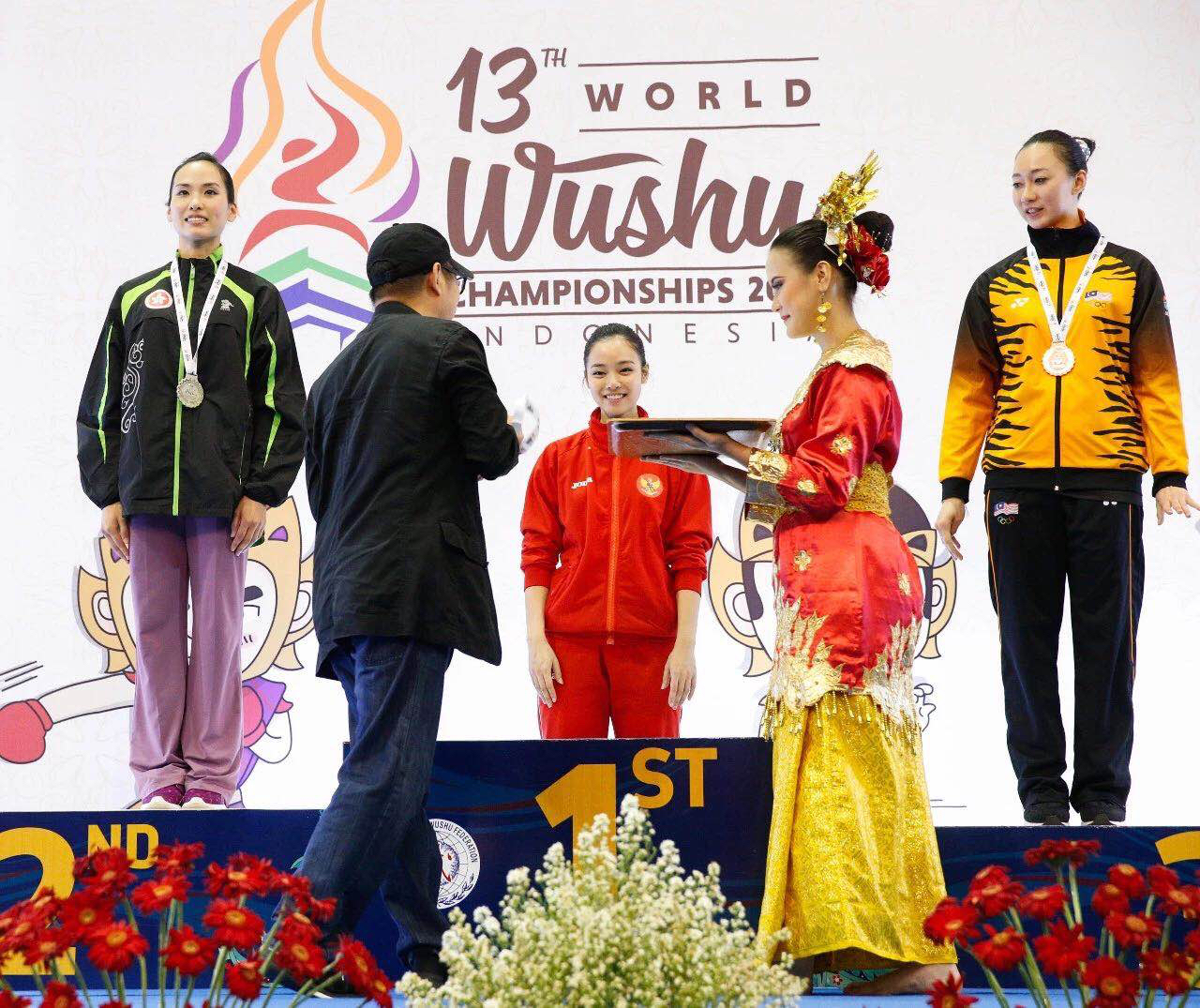 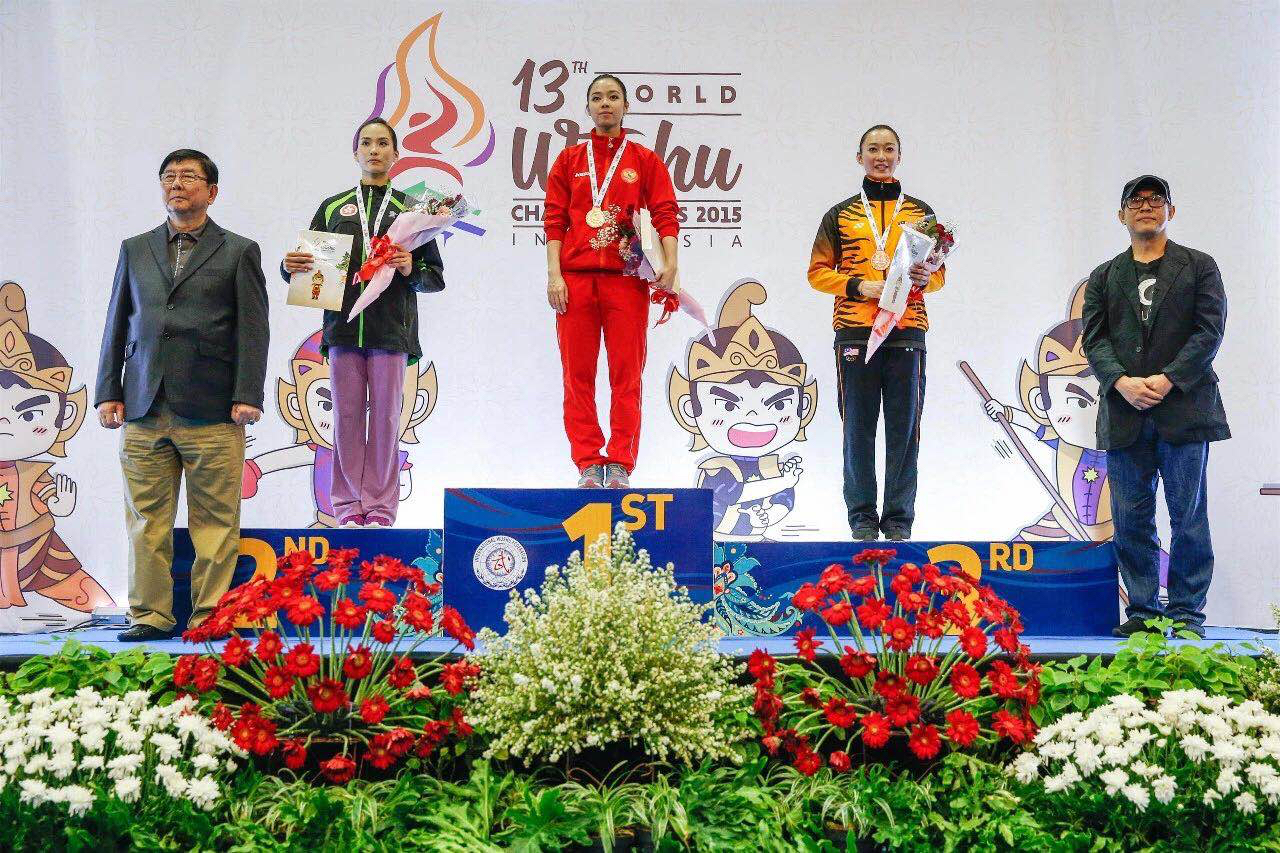 After her wins, she became a local hero – kids crowded around and asked for her autograph, and she was able to relax and enjoy the rest of the games. Asking how it felt, she repled,  “It was great! It was the first medal for Indonesia. My friend and teammate also got the gold medal that day, so we are very happy. It means a lot that the World Championships are in Indonesia. It’s really been motivating us. And we are lucky to have the opportunity. With Jet Li coming here, a lot of his fans can begin to know what is wushu really, and they will get more interested in it now. I hope this brings a positive energy to the country for wushu. To get the gold medal from Jet Li – it was awesome!” 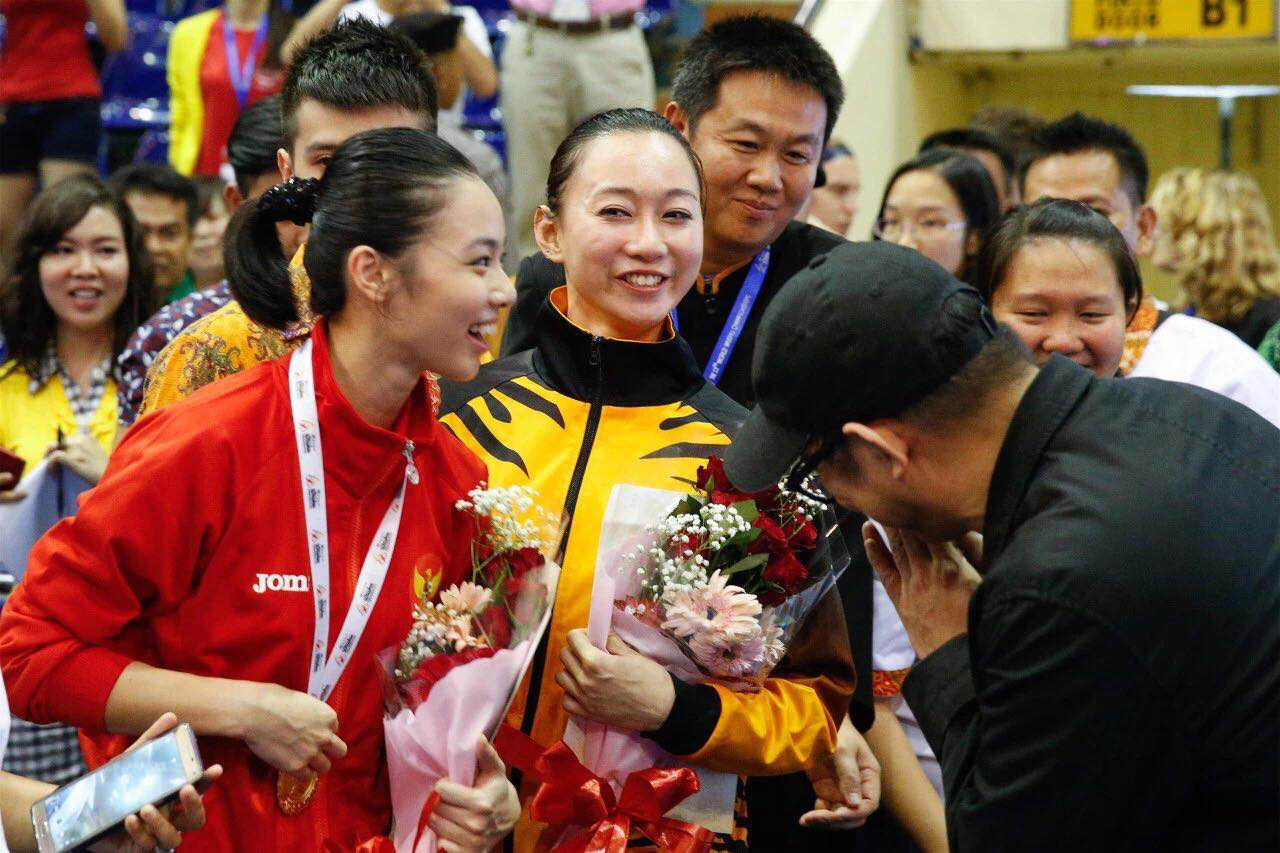 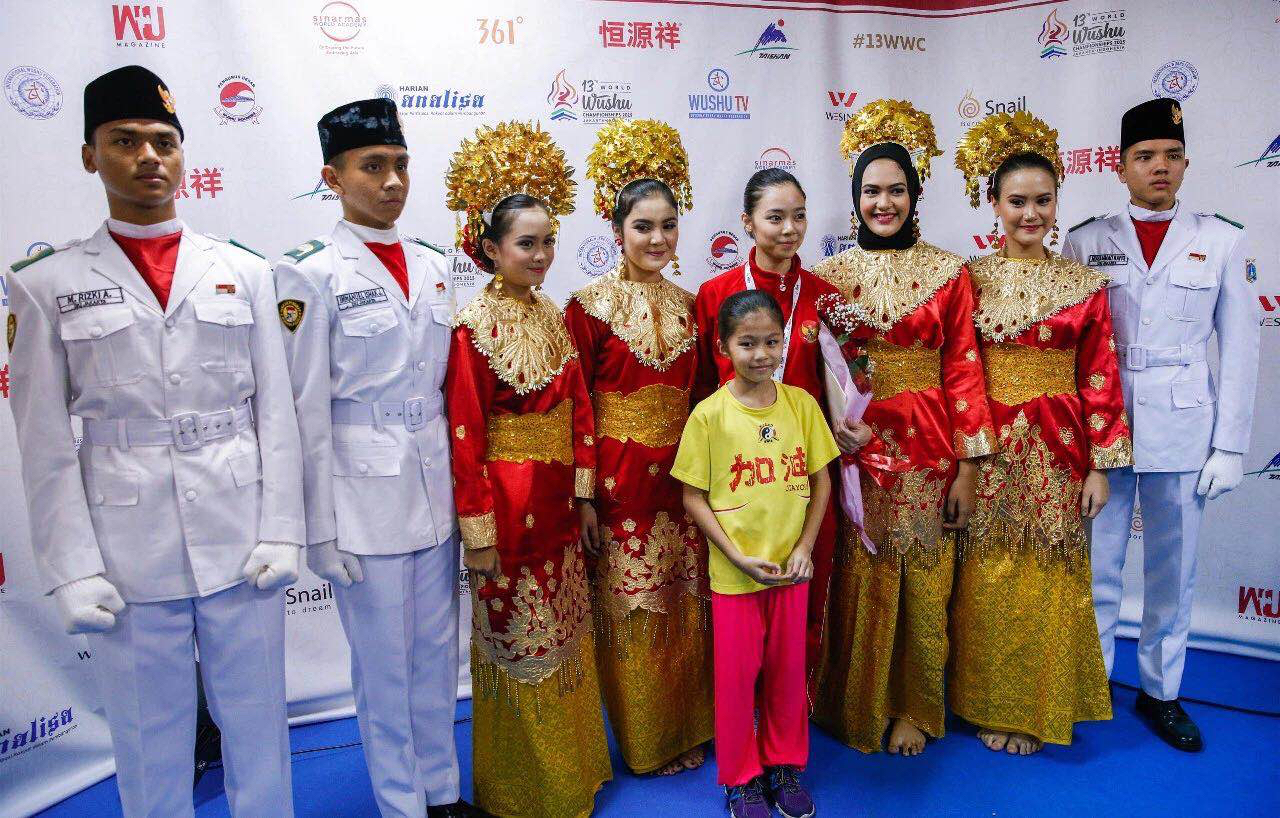 Lindswell’s internationally recognized talent also led to her invitation by the International Wushu Federation to demonstrate and teach taiji as part of an experimental program at the 2014 Nanjing Youth Olympic Games called Sports Lab – an interactive showcase of four sports: wushu, skateboarding, roller-sport and sport climbing – where she met IOC President Thomas Bach and performed taiji for him and other IOC members. This helped raise the profile not only of the IWUF but also of taijiquan. What made her wushu competitions even better was having her older brother, Iwan Kwok, an international taolu judge, always there in the room with her. 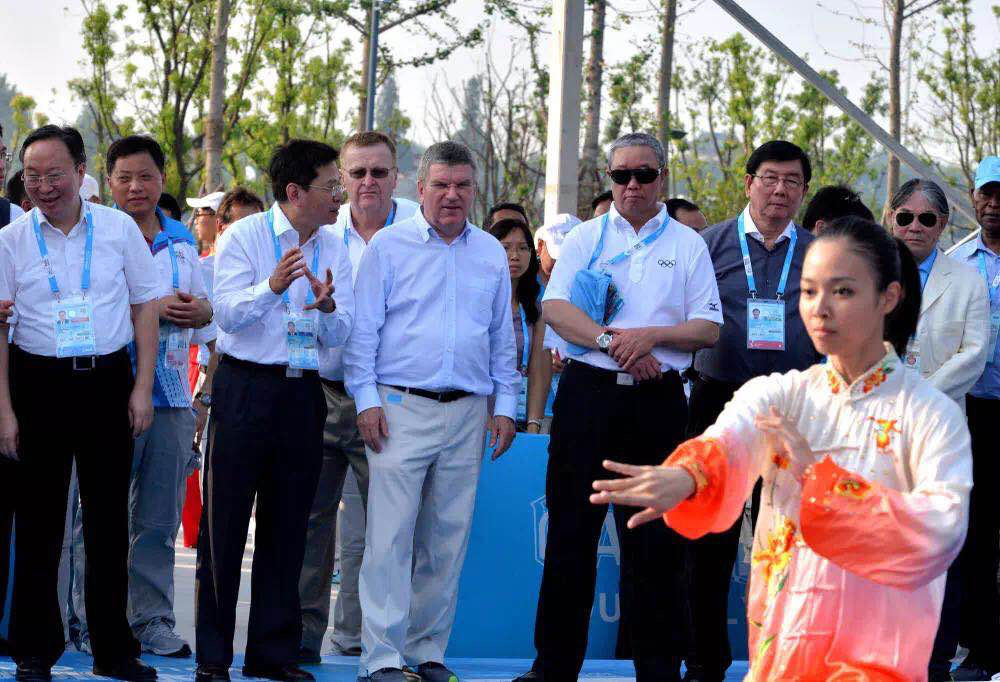 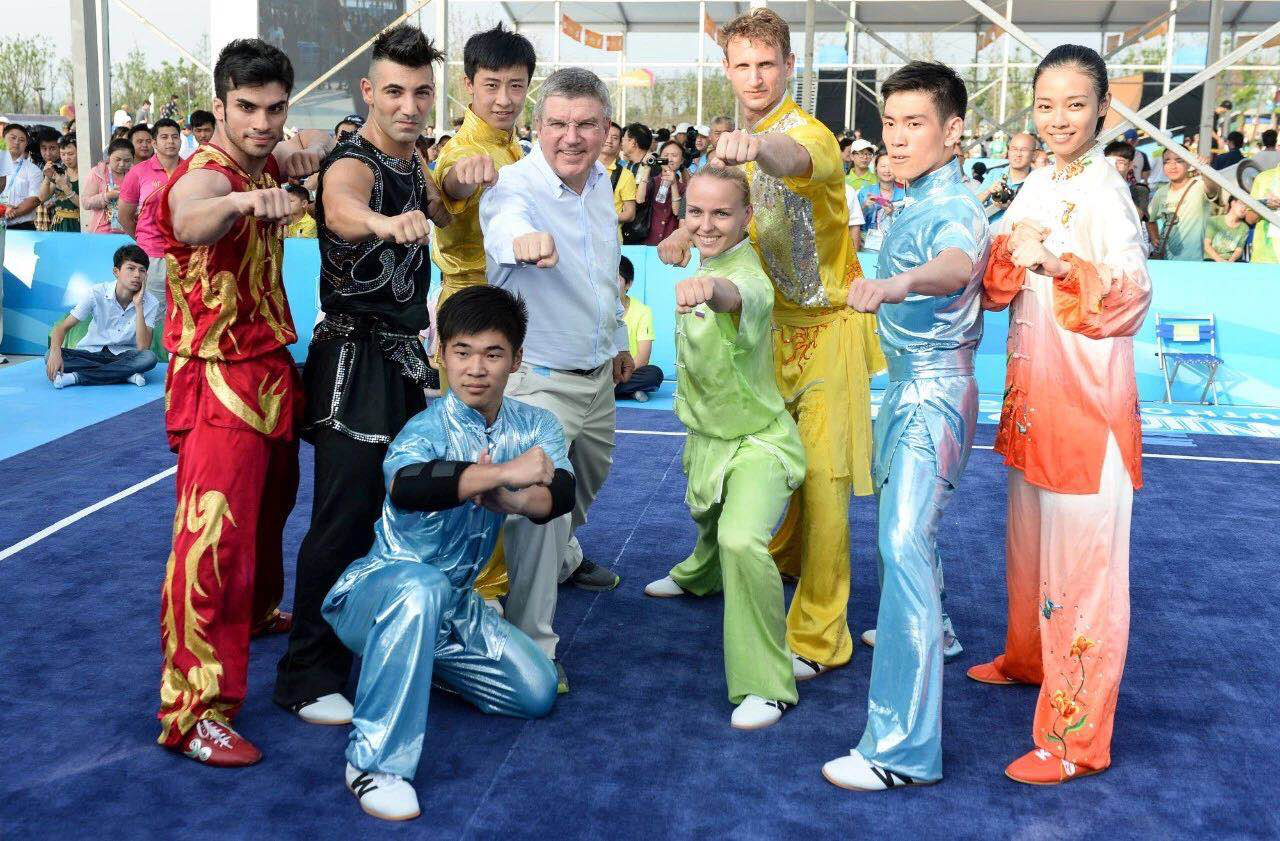 Lindswell has continued to challenge herself, winning gold taijiquan medals in the 2015 and 2017 SEA Games and another gold medal in taijiquan in the Kazan WWC in 2017. And then she wanted  just one more thing – a coveted medal at the Asian Games.  As fate sould have it, the 2018 Asian Games was held in Jakarta. Lindswell brought her magic to the carpet and won the gold, making her final dream for herself, and for her country, a reality. 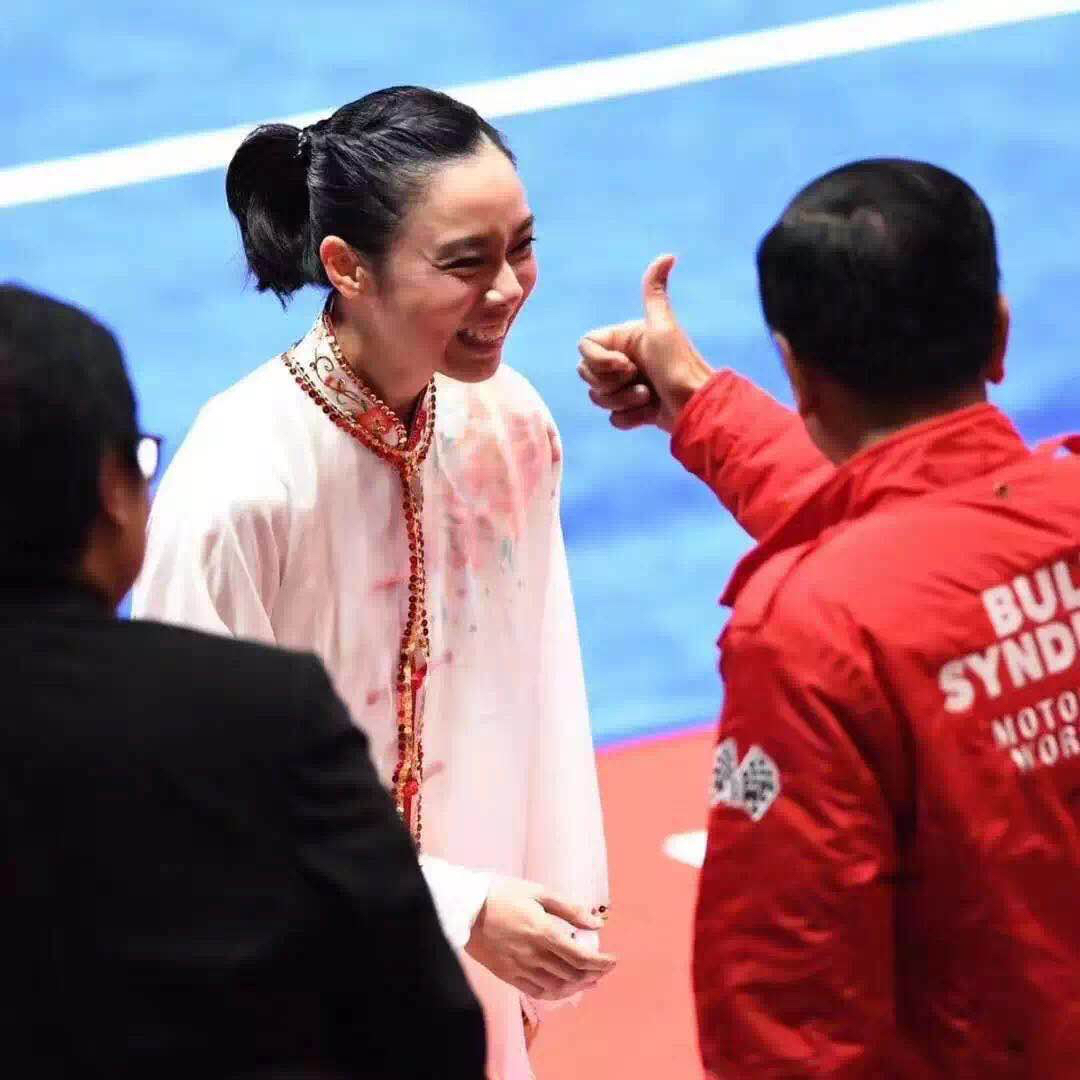 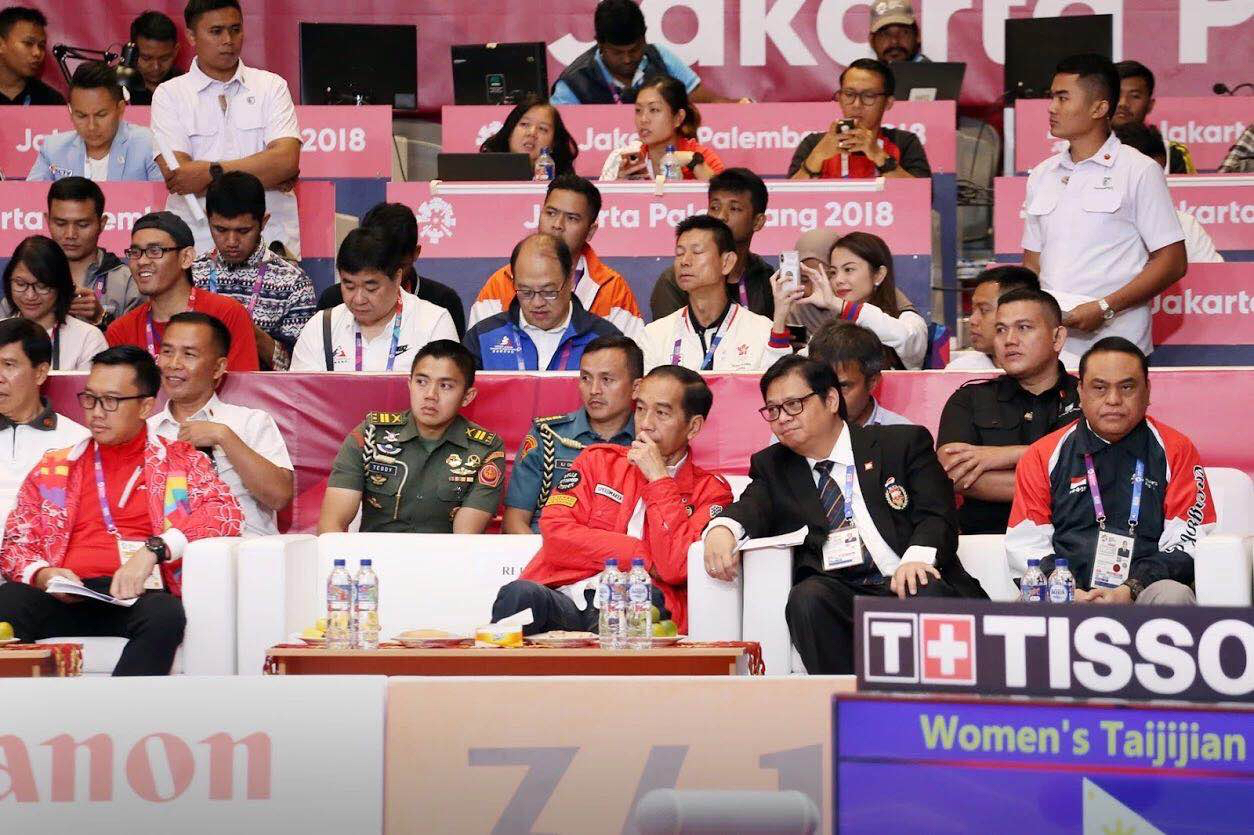 At 27 Lindswell has retired from competition, but continues to practice taiji, and it’s unlikely we have seen the last of her beautiful style. “ I compete for myself, and I keep learning,” she says, “but most important, you have to play with your soul.” 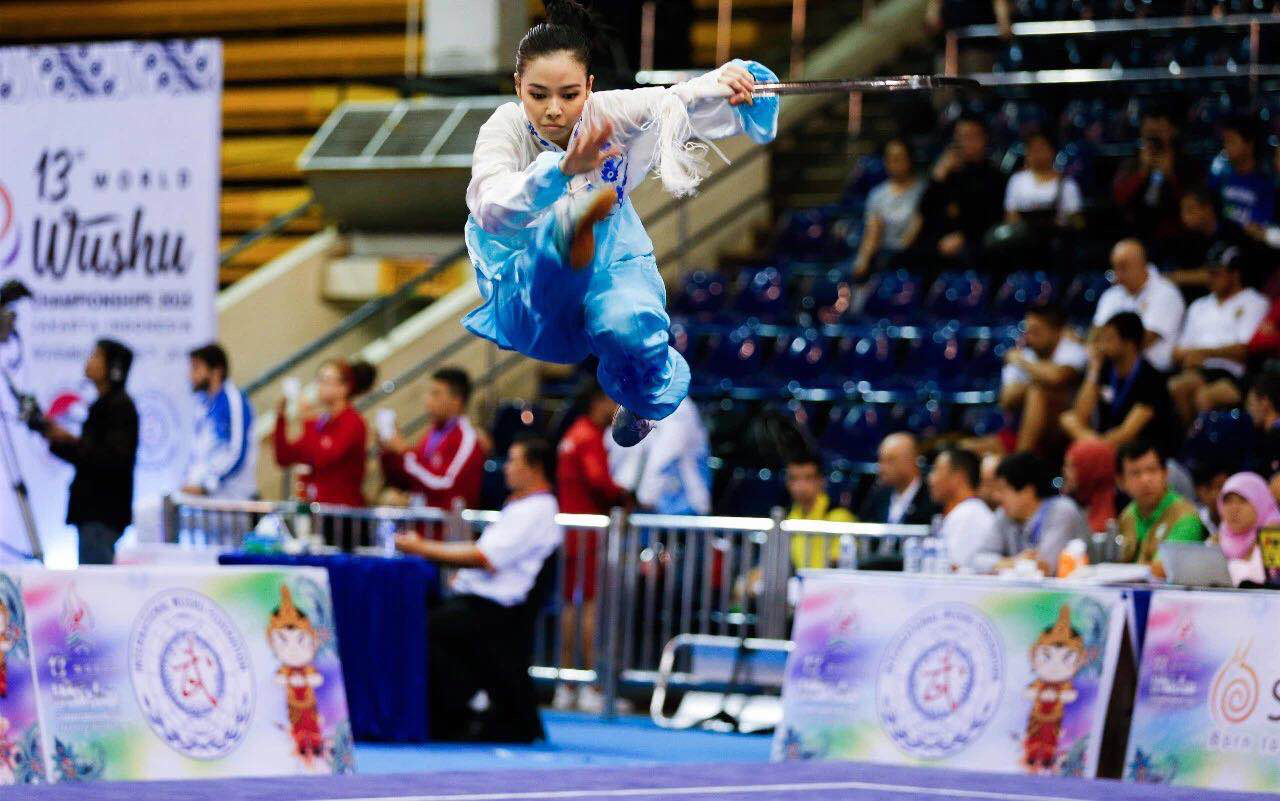 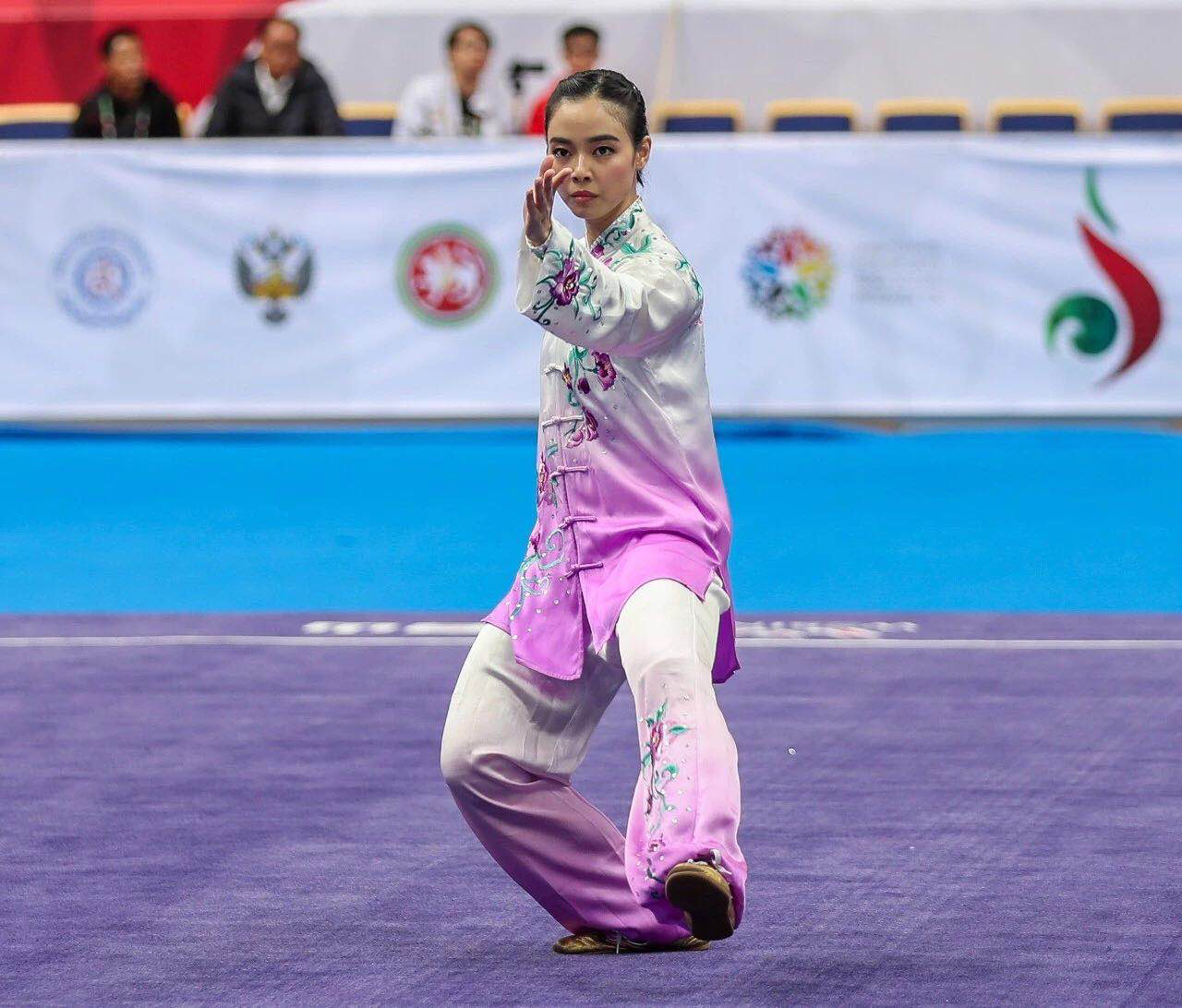