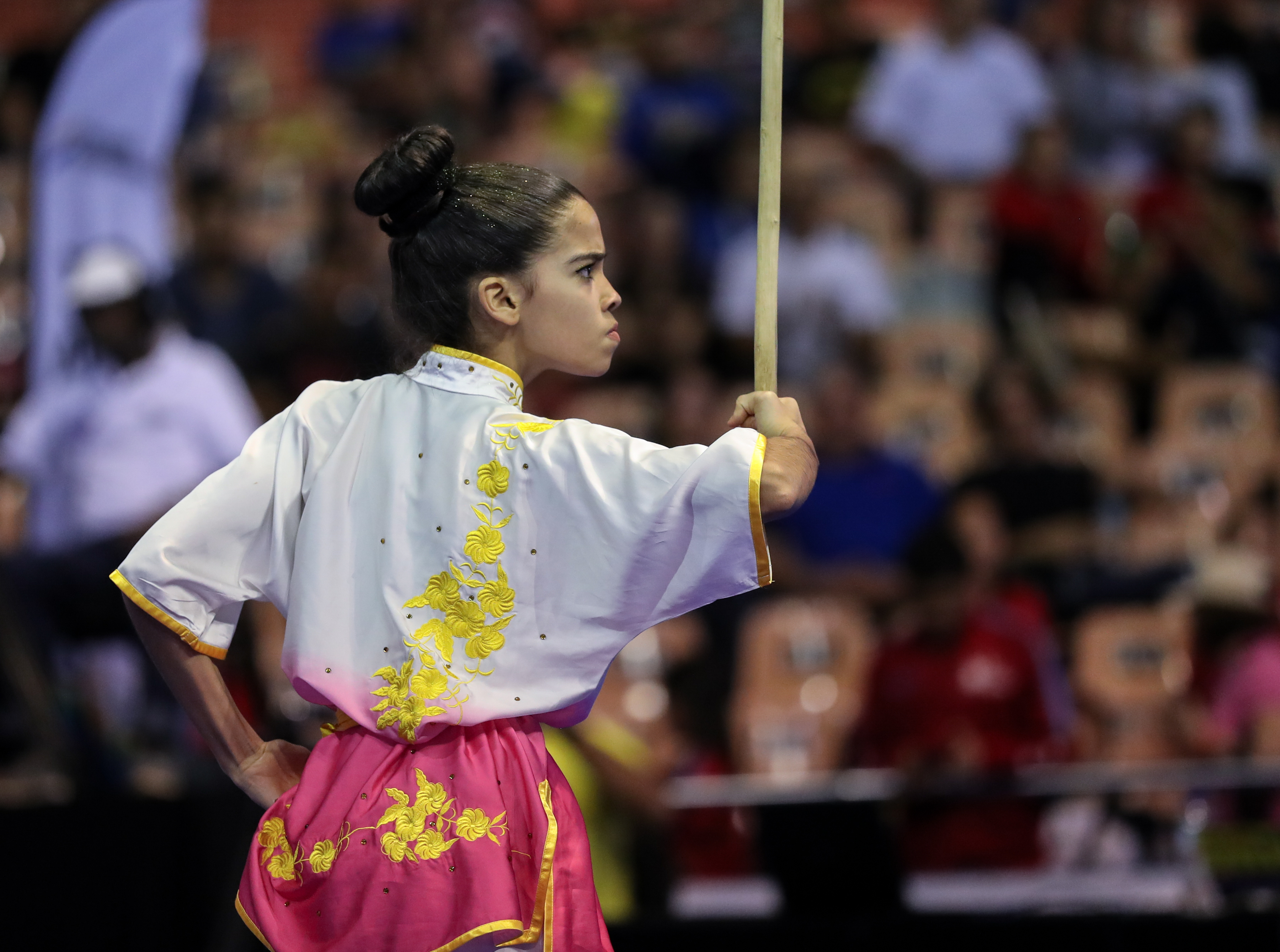 When Brazil’s own Brenda Porfirio Da Silva walked onto the carpet to perform her spear and sword routines at the 2018 7th World Junior Wushu Championships in Brasilia, the crowd went wild with applause, cheering and support. They were there to love and support their own, and their enthusiasm made the atmosphere in the stadium electric. Brenda’s shimmering, powerful performances indeed made her nation proud, but few knew she would evolve to shine so brightly only a year later at the sport’s pinnacle event, and her very first World Wushu Championships in Shanghai.

Brenda Porfirio Da Silva was born into a unique and special wushu family that has nurtured her talent and love of the sport from a young age. Her father, former Brazilian champion and taolu coach, João Ferreira da Silva Júnior, himself has contributed much to Brazil’s wushu development over the past decades. He owns a prominent wushu school in Brazil where he trains many young athletes, and as the father of now two national champions, he fondly remembers his daughter’s sport beginnings. “Brenda was born in the school,” he recalls. “When she was 4, she used to say that she did not like wushu and she wanted to dance classic ballet. And I reacted positively. When she was 5, she started ballet classes. However, she attended two classes and on the day of the 3rd class, she came up to me and said: ‘Dad, may I come to your school? May I train wushu?’ And then she began her wushu career. I changed my timetable and started a group of little girls. We spend most part of the day together in the wushu school. She grew up watching her brother training and improving.”

Brenda’s big brother, Brandon Porfirio da Silva, was a guiding light and a key figure in her development as an athlete. As a 16-time Brazilian national champion and long-time anchoring member of the Brazilian national wushu team, Brandon continually nurtured his sister’s talent as they grew up training and competing together. Brandon says, “You plant the seeds and they grow, the flowers bloom and give more fruits that fall to the ground and consequently grow more trees. I believe that inside my family everything was as natural as this process. I am a fruit from my mom and my dad, as Brenda is. Nature took care of everything in our school and Brenda just bloomed. I see in that even though her competition style has a lot of resemblance to mine, it was her own choice to start training wushu. I was there with her, in the school, training to reach for my dreams. Maybe she got some of those dreams for herself, feeling the energy that I transmitted there, and this gave her some purpose in her life.” 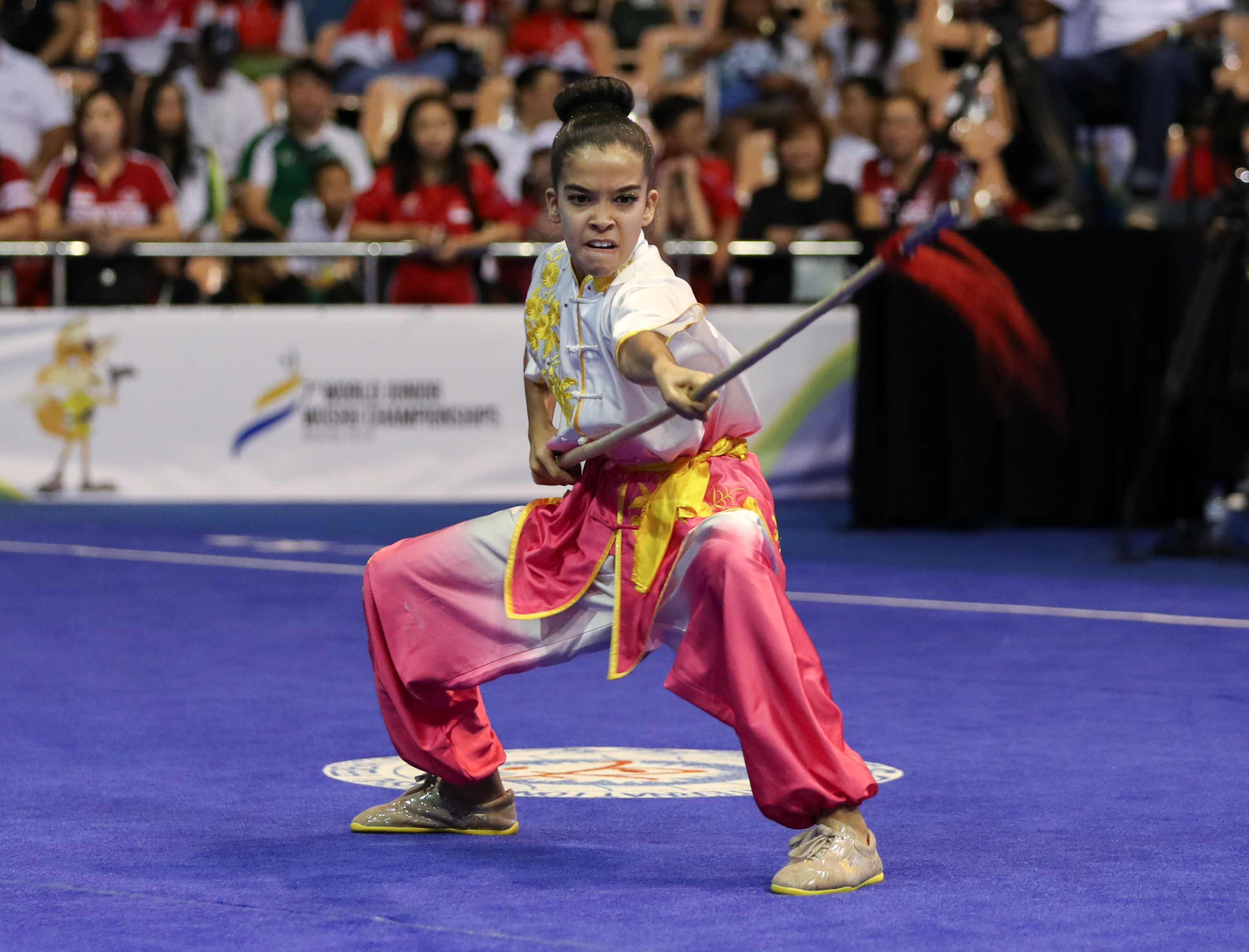 Brenda says, “My father and brother’s support was always essential to my wushu development. They are both my heroes. I have seen my father competing in videos and my brother live. They influence me every day.” She continues, “I have been interested in wushu since I was very young, and the movements, the completion clothes have always attracted me; but nowadays I admire the moral values brought to the athletes’ life as we understand that discipline and even sometimes deceptions are part of our lives. So, the discipline is what I most admire in wushu undoubtedly.”

Brenda has now been competing in wushu for nearly half of her life. She debuted when she was 8 years old in a competition in São Paulo. “At this very first time,” she recalls, “I felt the thrill that I have been feeling since then. I could say I got addicted to it. Year after year I wanted more and in 2014 I got a place on the Brazilian wushu team because of my good participation in the national championship. Later I got a place in the world junior championships in Antalya, Turkey. I also took part in the Pan-American championships in Costa Rica and the South American championships in Assunção in Paraguay where I won some medals. In 2016 I participated in the 6th  World Junior Championships in Burgas, Bulgaria. The last one was the most important to me for several reasons: first, it was my last championships in the C category, and second I leaned a lot during it. In 2017 I took part in the BRICS Games, which was also very special to me, and in 2018 I was really honoured to take part in the 7th World  Junior Wushu Championships in Brazil.”

About the 7th WJWC in Brasilia, Brenda recalls,”It was amazing. The organization and the people involved were great.  It was a unique feeling to compete in my country.  I was really under pressure. I imagined things could go wrong but everything went well. I think I was there to represent my country and that was the most important fact about it.”

One might suppose a young athlete, competing in front of her friends, family, teammates and countrymen, would find being up against the world’s top international junior champions stressful, but Brenda’s disciplined inner calm, focus and positive attitude helped her overcome nerves. “I was not nervous in both the categories I competed in,” she says. “I was more nervous while I was training for them. When it was over, I left the floor feeling I had done my best and what my couch expected from me. I was smiling. About the result, I’d thought I had scored more and I would be on the podium. But it did not happen. However, it made me stronger and willing to train harder and harder.” 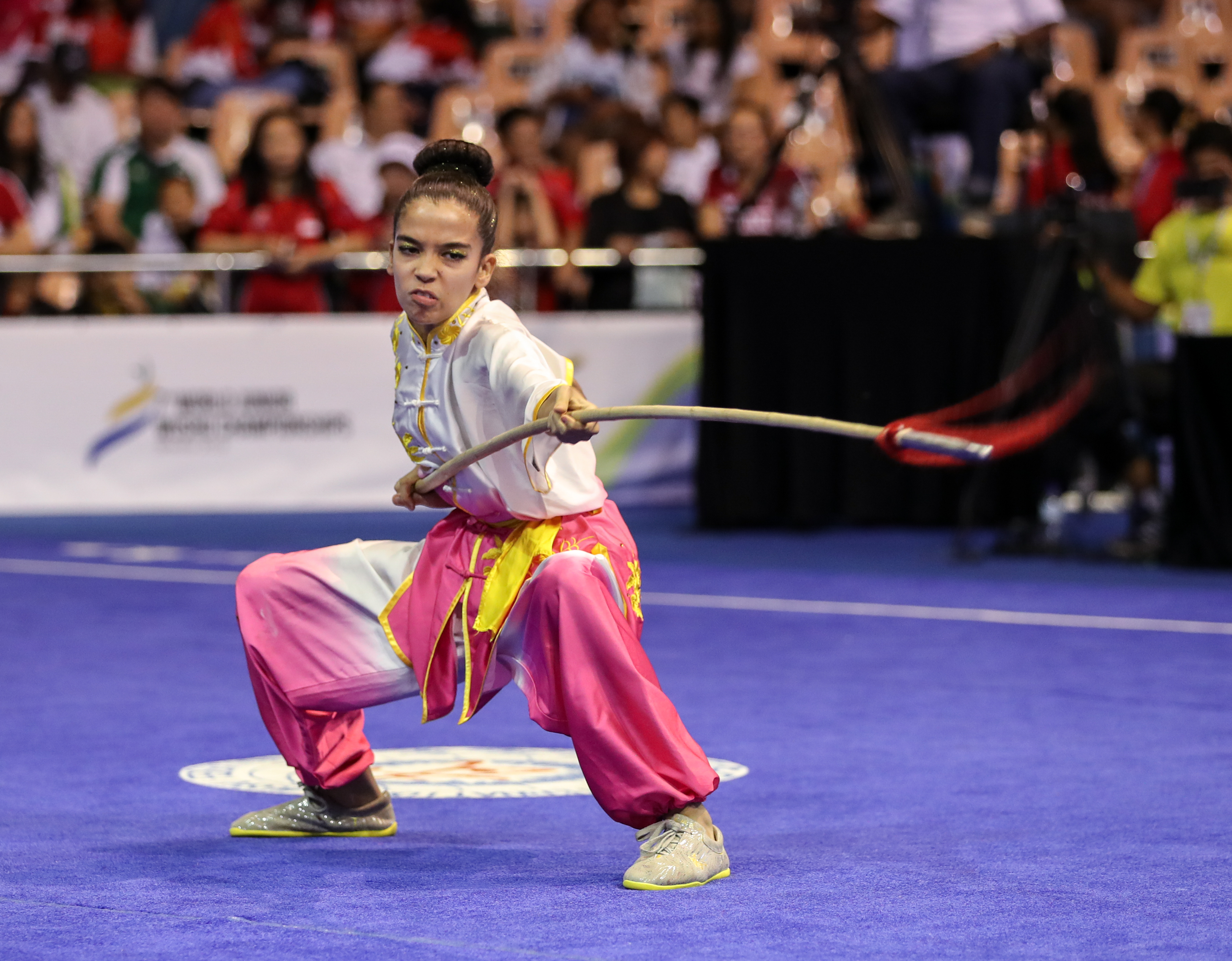 Reflecting on his daughter performing in the 7th WJWC, João Da Silva said, “I trained her for the World Junior Wushu Championships here in Brazil. She had all the support from her mother, Cristiana, her brother and all the CBKW directors. She was focused and strong. Her presentation was the best she could do. We worked hard on her emotions and I made her believe that she was able to win, but I also prepared her to lose as always. The family was the most important support. I work as a psychologist with the whole taolu junior team because they are children dealing with strong feelings. I always motivate them all before competitions to get the best from them. At this specific time, I needed to take all the pressure away and reassure her that the most important in life is the love from her family. It was very emotional to see her competing strongly. In the end we cried a lot.” He pauses, and adds, “Brenda’s future is unlimited. Now she is older and she will start a new category but I am sure she will do well at it.”

The boost from the 7th WJWC was in fact remarkable. Making the national team for the 15th World Wushu Championships in Shanghai became a watershed moment not only for Brenda and her family, but also for the Brazilian wushu team. Brenda’s move up to adult competition fulfilled her promise with a stellar Shanghai showing where she garnered a 9.03 in jianshu and a 9.183 in qiangshu amidst stiff, world-class competition. Even better, her older brother Brandon was competing as her teammate, and her father, João , was there to coach them both. At the end of the event Brenda told us, “Being just 14 years old, competing in such a big competition was amazing, and I can say I’ll never forget this experience. I learned a lot, and I could appreciate everything that the competition could offer me. I met up with many people I know who worked hard also to come here to Shanghai, and we have shared many experiences at this competition. It was awesome.” Her brother Brandon Porfirio da Silva said, “I believe every experience in life has a reason. Having the opportunity to show our martial spirit within competitions is really spectacular. I say “ours” because I was not alone. It was my sister’s first world championships, 14 years old, among the best in the world. And if we have the respect of the best, it is because we are among them here in Shanghai.”

Their father João added, “This world championships was very special for me. Despite being responsible for the taolu team of 8 athletes, among them were my children Brandon and Brenda playing together in the World Championships for the first time. In this case I tried to separate the Coach and the Dad, and whenever they performed there was a lot of emotion involved. This event fuels their evolution, they are always helping each other and cheering for each other. It was really unique and special, and we’ll keep it in our hearts for the rest of our lives.” 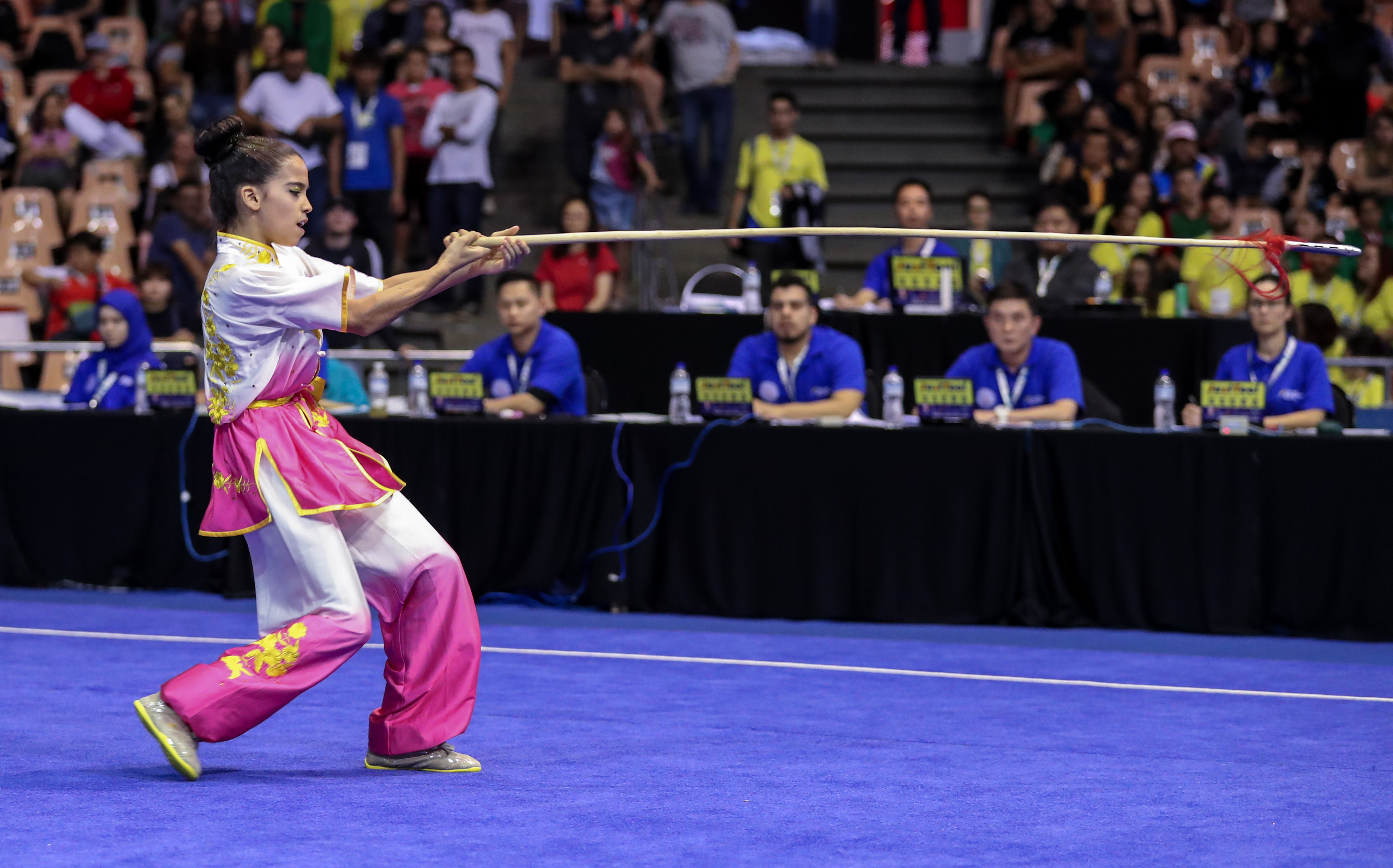 In Brazil, Brenda is a top student in her school studies, and she applies her academic discipline to her wushu as well.  “I train everyday,” she says, “but not on Sundays. I train flexibility, strength, and agility with the wushu techniques. I run a lot and do the forms many times.” Her favourite and best category she says, is qiangshu, “Because it is the hardest to learn. I learned jianshu first, but now I love spear.”

Besides representing Brazil in her own country and internationally, one of Brenda’s most meaningful competitions was when she went to Guangzhou, China with her brother for competition at the BRICS Games in 2017. “It was a great championship where I had amazing experiences. And the best of all was that I had my brother with me, supporting me while I was nervous. I was next to the best athletes in the world which was a dream. I could also be with my brother when he achieved his goal in daoshu. We were totally filled with many emotions. “

Does Brenda have wushu heroes? “Of course,” she answers, “I am a fan of  Xiaoxiao (Lai) from the Chinese team. And my both heroes are my father and my brother undoubtedly.” In her free time Brenda likes reading and connecting with friends on social media. “I love swimming in the summer,” she adds. Her favorite music? “During training I listen to rap but I also like the Brazilian pop music. And, she says, “I love eating! My favourite food is rice, beans, steak, and lots of salad and vegetables.” And like many athletes, she also dreams of an Olympic experience. “I would love to have the opportunity to take part in an Olympic Games alongside other athletes I know,” she says.” I have made lots of friends from all around the world. We usually exchange presents in the end of each competition.”

The story of the entire da Silva family, filled with love, hard work, support, and a deep passion for wushu, is an inspiring one. With a final reflection on his sister, Brandon Da Silva says, “It’s hard to answer for others about their future, but, if Brenda wants, she will be the greatest athlete in Brazilian wushu. She’s gigantic, she has a spirit of a champion, the energy of a champion, she is a champion. Look at how she behaves inside the arena, look at how she smiles and how she acts in her daily life. And she’s only 14 years old. Fourteen! I always say that she’s the best we have, she’s a gift. Not only wise, intelligent and empathetic, but when she wants something, she fights for it. And she’ll be like that for her whole life — there will be no chains to hold her back. She’s the evolution, the new generation.” 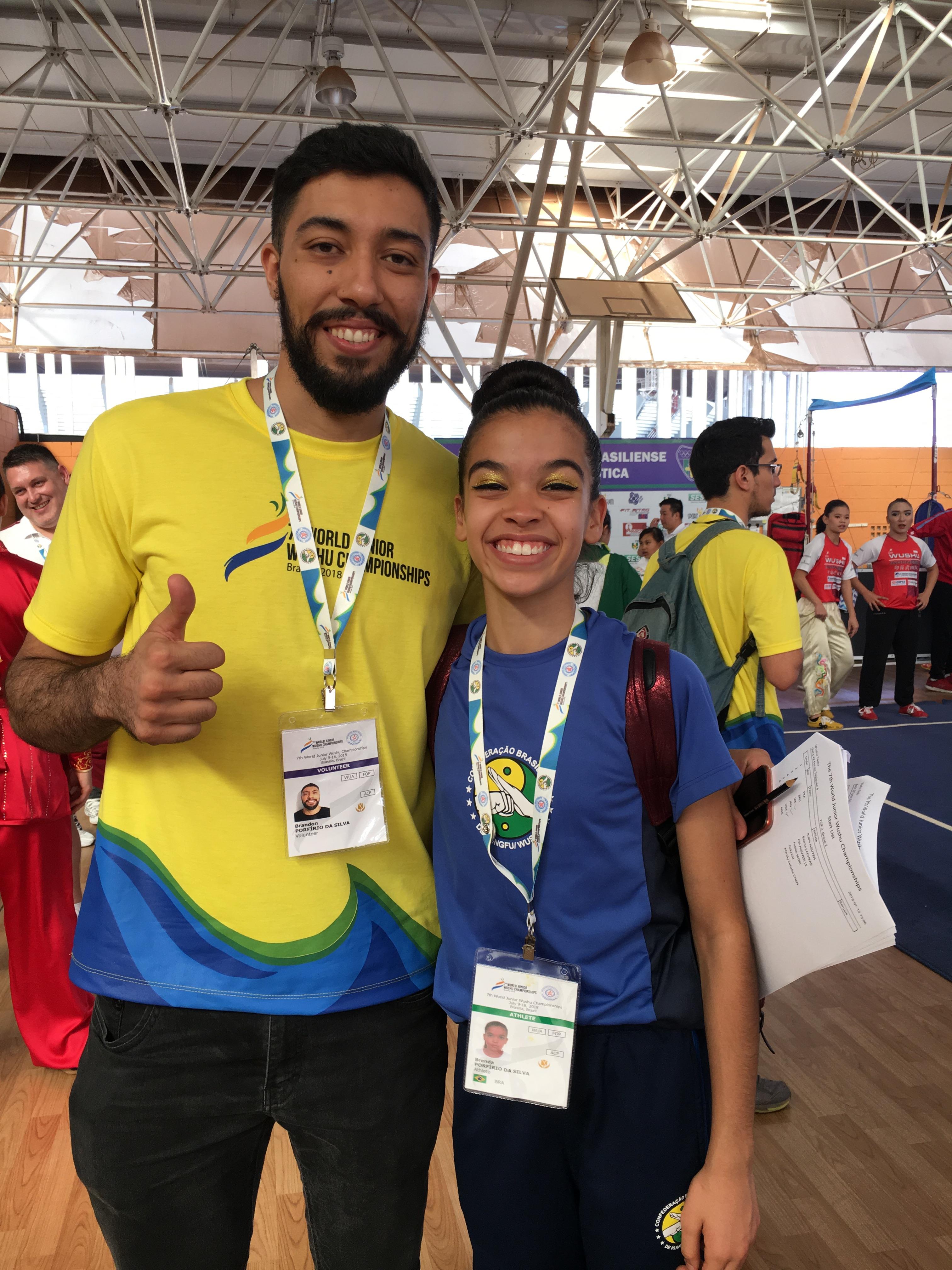