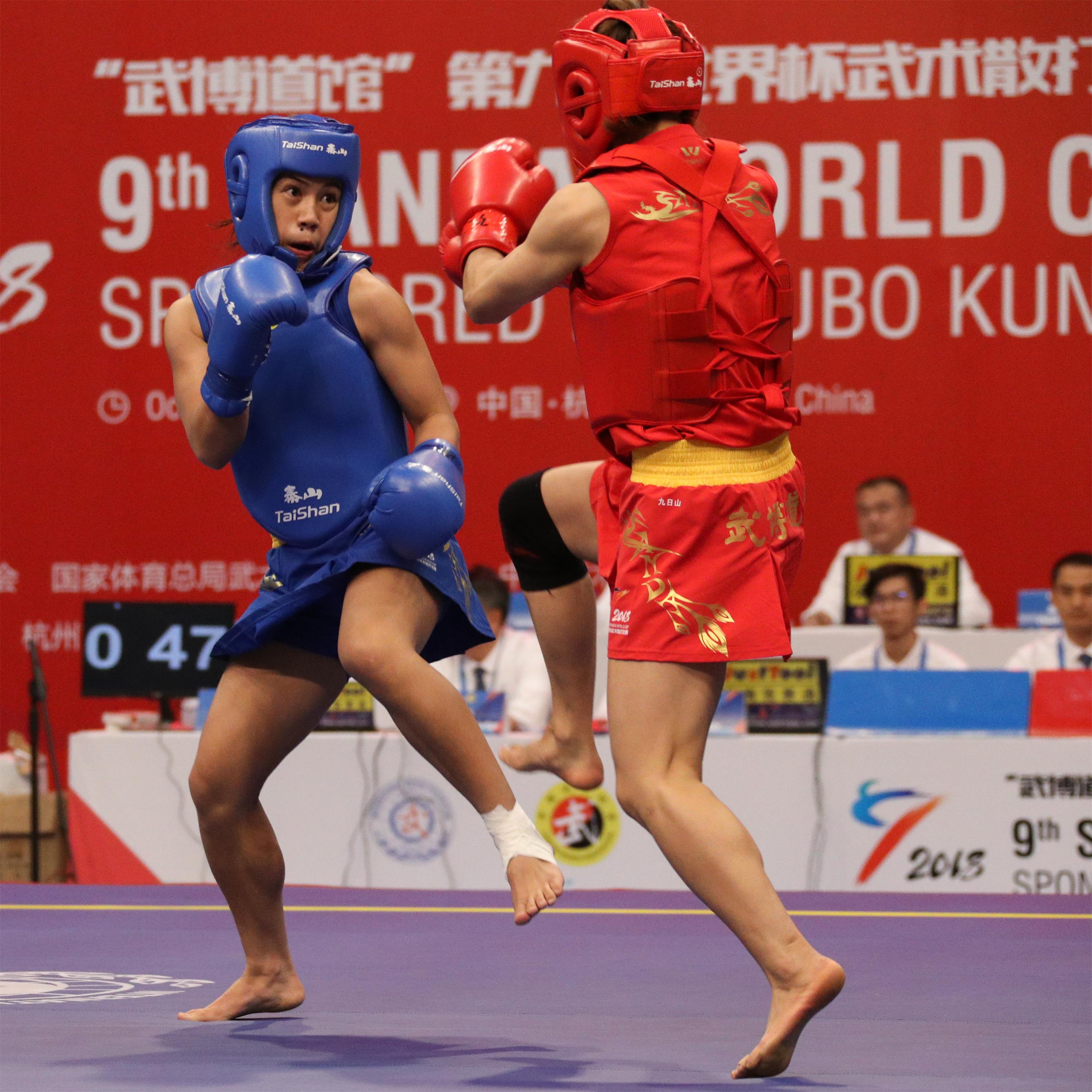 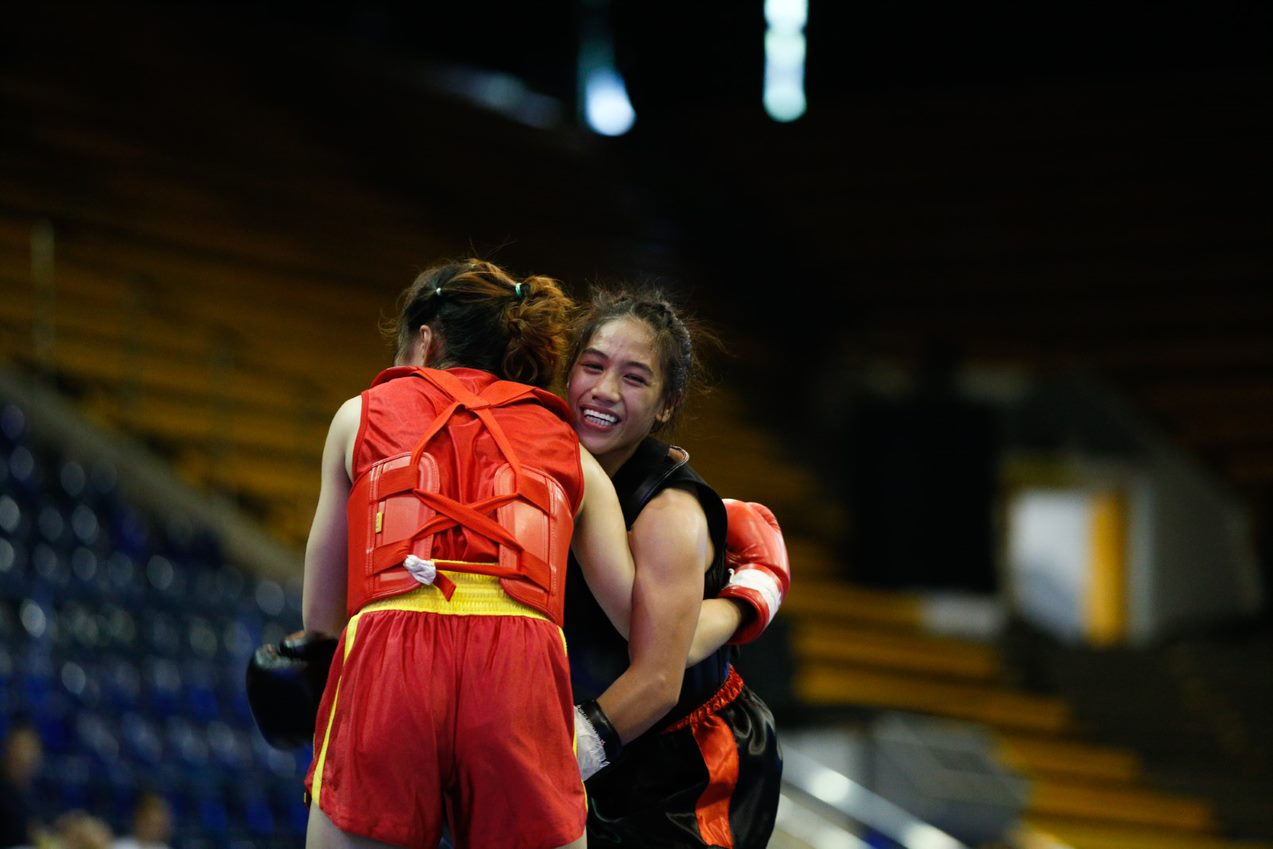 Philippines’ gold medal champion Divine Wally has been a top sanda contender for the past half dozen years, always pleasing spectators with her clean, powerful style and her outstanding sportsmanship. After winning her prized gold medal at the 13th World Wushu Championships in Jakarta, she lost in a tough fight to China two years later in Kazan, and won another bronze in Shanghai at the 15th WWC. Wally has become a celebrated athlete at home in the Philippines, and her dedication to training, to her team and country, and her insights on sportsmanship make her a role model in the sport. Her most recent triumph was a gold medal at the 2019 SEA Games which took place in the Philippines, an accomplishment that may be her most meaningful of all.

Wally started her path to wushu as a youth through various other disciplines that built her athletic foundation. “When I was young,” she recalls, “I really loved martial arts. In elementary school I did taekwondo, and in high school I joined boxing. Wushu was interesting, and when I was going to college I needed a scholarship, so I joined wushu for a sports scholarship. I had two weeks to train for my first fight, and I won the bronze medal.”

“I kept fighting,” she says, “and in 2012 at the Philippine Nationals I was discovered by the National Wushu Federation. They asked if I wanted to join the national team. I did, and I was also very interested in representing my country.”

Wally trained in Manila in 2013, and paused her studies for a bit to train wushu to compete in her first World Wushu Championships in Malaysia that year, her first serious event. “You need to have determination,” she notes, “and you need to believe in yourself. Sanda is different at the senior level, it’s much more difficult. You have to train more, work hard. I pushed myself to the limits – I wanted to know how far can I go in wushu?” She didn’t win a medal at that championship event, but she gave a good performance which spurred her on to train even harder. 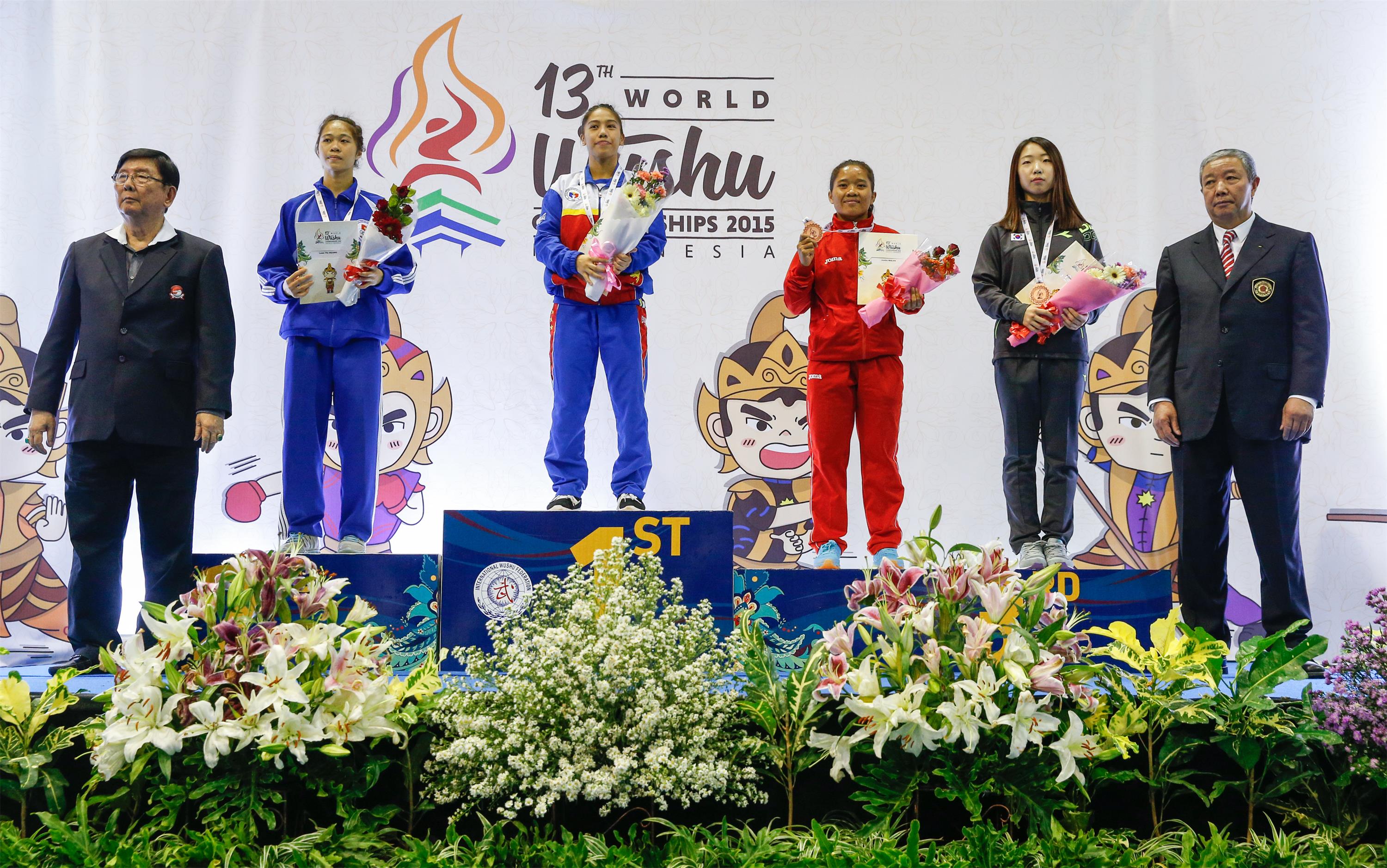 Then following the WWC in 2013 Wally went to the SEA Games in Myanmar and got the silver medal. She says, “In Malaysia at the WWC I didn’t get a medal, but I said I had two years to train for the next World Championships. In 2014 I trained in China for the Asian Games at 52Kg. Normally I fight at 48 Kg, so this was very difficult. I didn’t get a medal in the Asian Games but it was good experience.”

Positive attitude and perseverance are two traits that Wally has plenty of, and as she prepared for the next World Championships she had her eyes on the prize. “In 2015 I was training for Jakarta,” she says. “I said to myself, if I’m going to grab a medal I can’t give up. My dedication was there, I was very motivated. And I got it, my first gold medal — I beat Vietnam, and I almost cried. I worked very hard.” 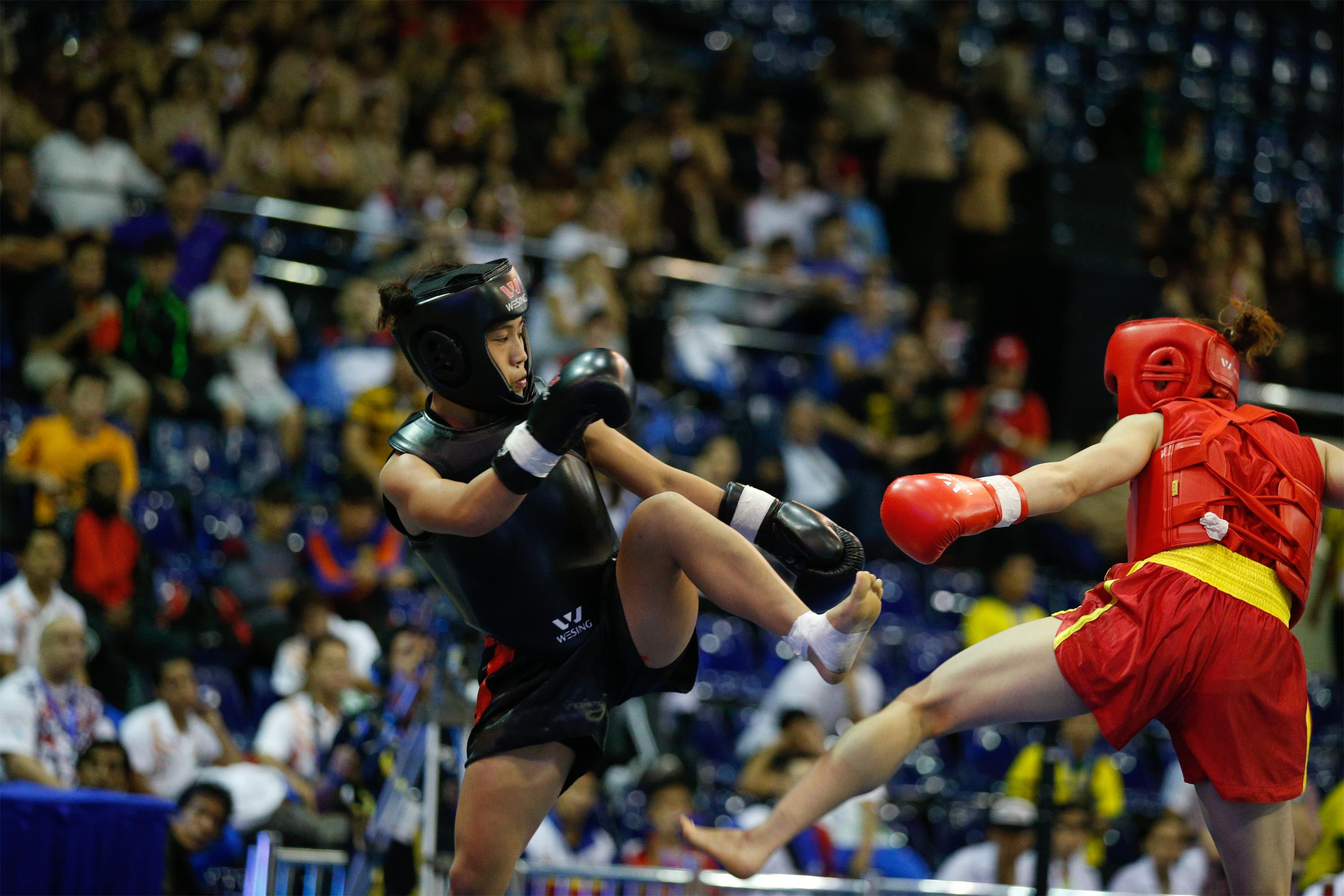 Wally says she felt proud and very thankful after winning the World Championships, and her victory was big news in the newspapers and sports media in the Philippines. However, she also discovered the victory had vaulted her to a new level which was also much more in the public eye. “Every time you get gold you have to train more,” she says. “It creates bigger challenges, more pressure. When you become the champion you now need to protect your reputation. You don’t want to disappoint people. Younger athletes look up to you. It’s more pressure, but it’s more fun too. It’s a good feeling that you can share your knowledge and experience with young athletes. You learn how to motivate them, and what you need to show them.”

What are Wally’s challenges in sanda? She laughs, and answers, “The hardest part of the sport is making weight, cutting weight. In training I’m on a low carb diet, no rice. I’m always very careful to show up under weight, just to make sure I will make weight.”

Wally’s big goals for 2019 were piled high on top of each other – the Shanghai 15th World Wushu Championships in October, and then the 30th SEA Games (Southeast Asian Games) almost immediately following. To make matters more nerve wracking, the 2019 SEA Games would be held in her home country the Philippines. “And in the meanwhile,” she adds, “I am still a college student, so I train, study, train, study.” 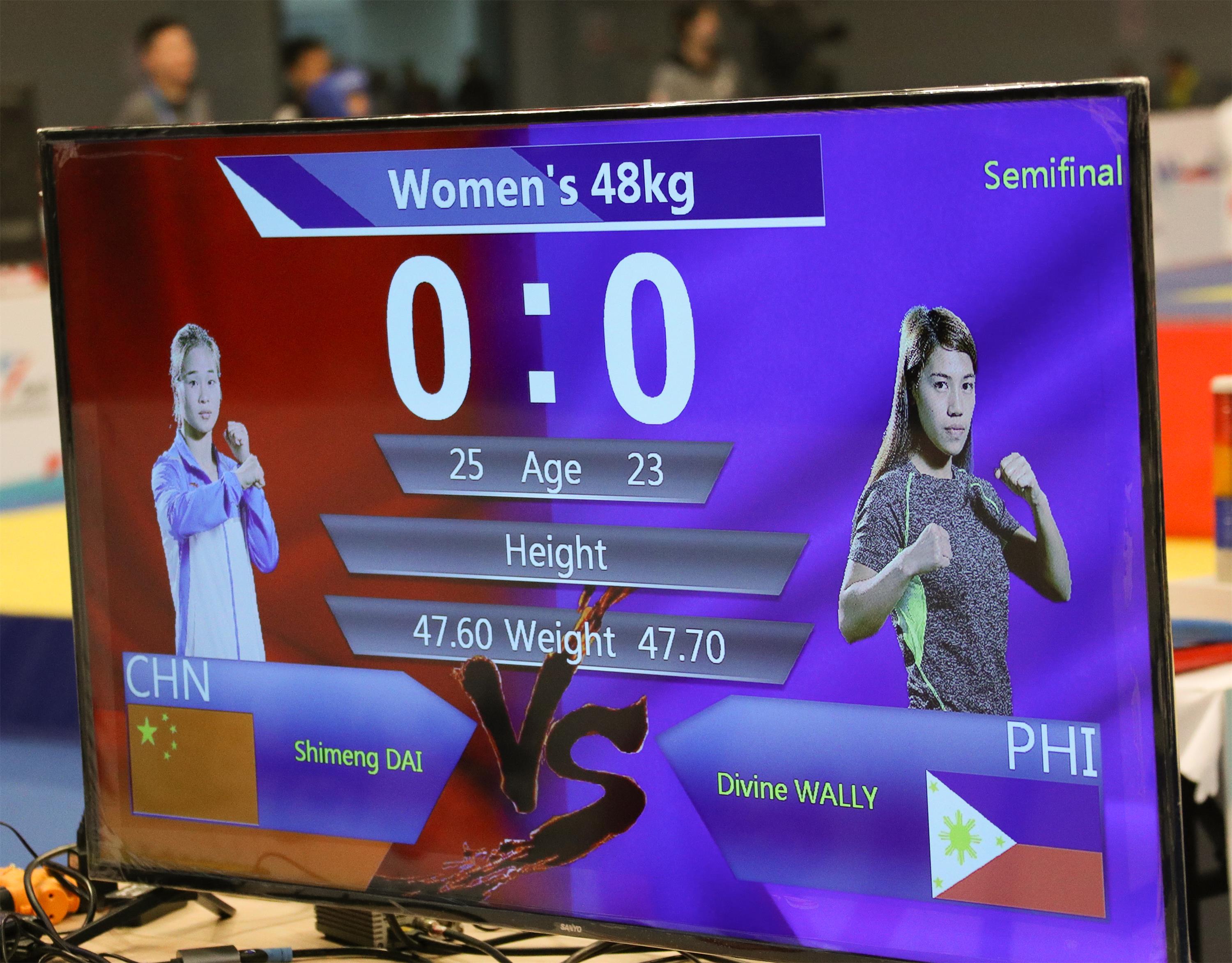 Divine Wally’s Shanghai WWC brought her tough bouts, and her muted victory would be bronze. “My experience in Shanghai was a little disappointing when I lost with Vietnam, because I really worked hard to get the gold medal. I almost gave up during the fight, but with the help of my coach and teammates I was able to overcome it. Even if I did have a setback in 15th WWC, I did not give up on my country, my focus, perseverance and determination. It only made me more eager to get the gold medal in SEA Games.”

Now Wally’s mountain seemed even higher. She says “For me, my SEA Games journey was not easy, It’s a different pressure when your country is hosting the event, we need to do our very best, need to show our countrymen that we fight for our country. Aside from fighting with the strong opponents like Vietnam, the most challenging part also is cutting weight.” Unlike her fight in Shanghai, Wally fought dominantly, and swept along by a cheering hometown audience she beat her Vietnamese opponent to grasp the gold. “Hearing my national anthem being played while standing on the podium gave me goosebumps,” she says. “I was very grateful to God and my country. The SEA Games results really made all my sacrifices of the past year worth it.”

At most wushu events the camaraderie of different teams is gratifying to watch, and Wally’s’s team shares an especially strong bond.  “Being on the Philippines’ wushu team has been a wonderful experience,” she says. “Everyone comes from different places around the country, and our coach always tells us we are just like a big family – we take care of each other, support each other, coach and correct each other.”

“My actual family is big, I have seven brothers and sisters. Before, my parents didn’t want me to fight, they said it is too violent, but now that I’ve won championships they support me. But they say I still need to finish my studies!”

Divine Wally is an athlete whose experience in wushu is continually developing, not least because her mental attitude and philosophical ethos embrace the idea of change and evolution. “Every fight offers more experience,” she explains. “In the last Asian Games (2018, Jakarta) I won the bronze medal and fought at 52 Kg – I fought Elahe! (Mansouriyan Semeromi). It was a tough fight. The first round I won, the second round I got pushed out twice, and the third round she won. She’s very good, very hard to fight; she’s tall, she has a long range, and scores a lot of kicks. She has more experience than me, she’s older. I need to be very, very brave against her. And I learned a lot. In Kazan I lost to China – it’s really hard to fight against China also. But regardless of the outcome of my fights, as long as I do my best it’s ok. When you compete on the stage, you see who you really are. It’s more important to put up a good fight, and to fight well.”

Even as she approaches the end of being a student, Wally looks to pass on some of her wisdom, inspiration and experience to the up and coming generation. “My next goal, “she says, “is to influence the youth to involve themselves in martial arts like wushu. As an athlete I want to be a good example to the youth.”

“I was always drawn to sanda,” Wally says, “but now it’s my real passion. If you want to do something, you need to have passion. Sanda inspires me in life.”