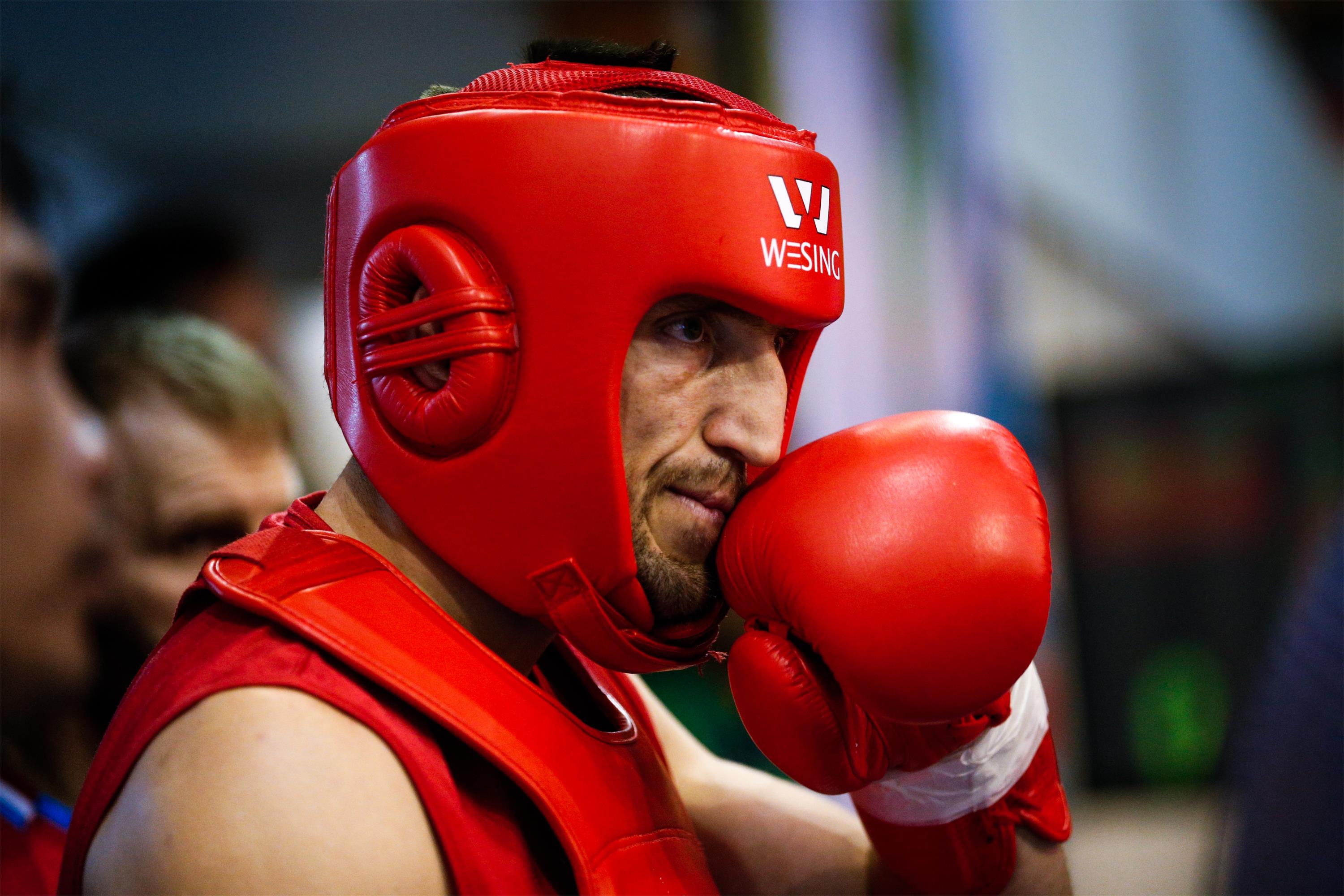 Wushu’s legendary “Sanda King” Muslim Salikhov reigned as Russia’s top sanda fighter for well over a decade, and he remains one of the sport’s most highly respected and beloved athletes. He won a record-breaking five gold medals in the World Wushu Championships during his amateur fighting career spanning 2003-2015. His odyssey from his native land, the Republic of Dagestan in southern Russia, to China, Thailand and ultimately the global world of MMA, has helped make him a top ambassador of sanda. Currently Salikhov is signed to the UFC where he fights in the welterweight division, and never forgetting his roots, he now brings his classic sanda techniques to millions of viewers worldwide.

Muslim was born in the city of Makhachkala in Dagestan, near the Caspian Sea. “It’s beautiful country there,” he says, “with mountains and ocean. Our whole Russian team is always very famous for sanda, and Dagestan has the best sanda schools in Russia. We have 32 nationalities there,” notes Muslim, “and everyone lives together happily, all like brothers, even though we speak 32 different languages. But even though some of my teammates on our sanda team spoke different home languages, we’d all speak Russian when we traveled and competed together. We were all a big family.” 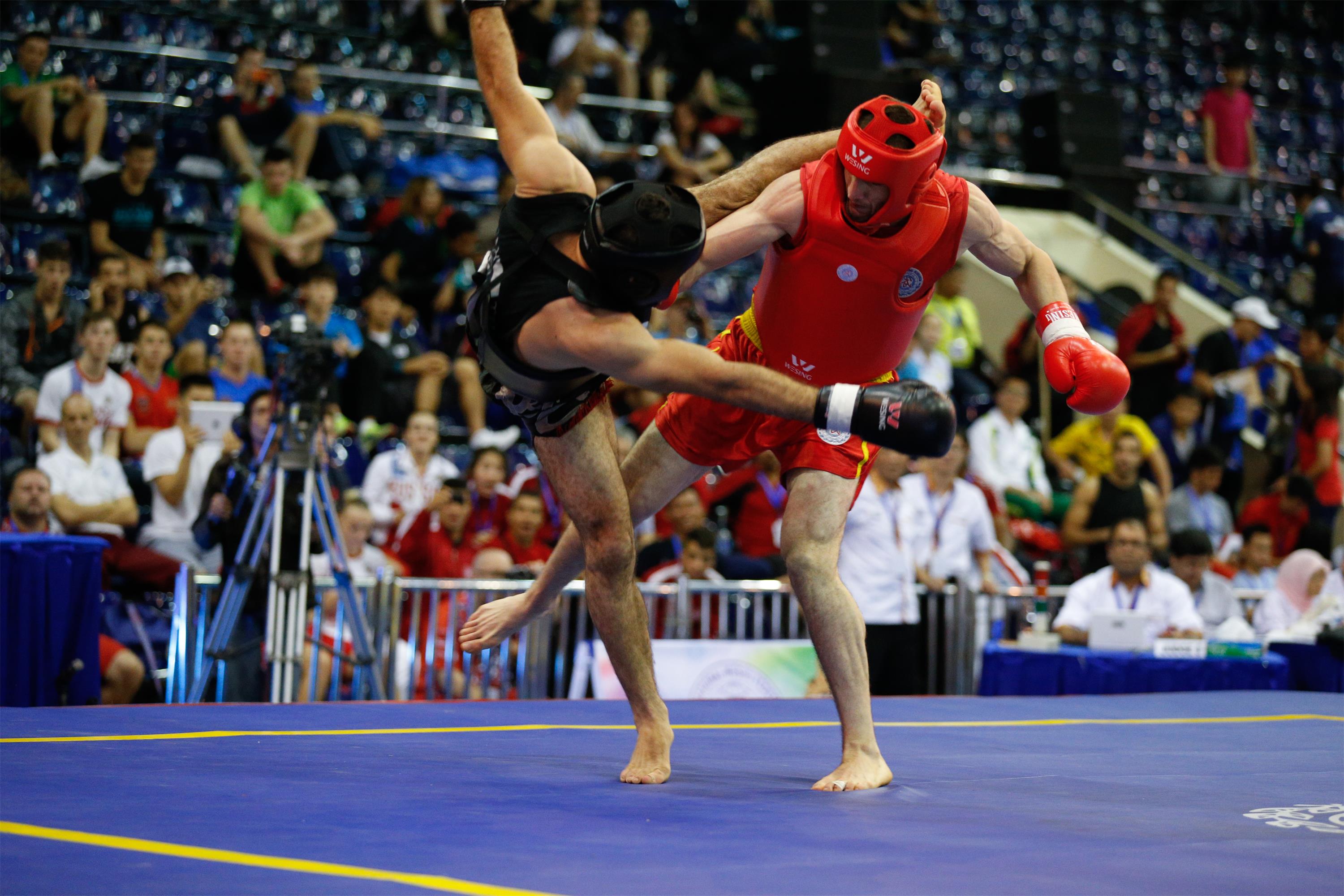 Muslim started training in sanda in Makhachkala when he was nine years old. His coach Gusein Magomaev was one of the early pioneers of wushu/sanda in Russia, having trained in China in the 1980s and opening his famous Five Directions of the World wushu school in Dagestan in 1991. During the next two decades he helped build Dagestan into the sanda capital of Russia, and has produced an impressive amount of Russia’s top champion fighters.

Even at the age of nine, Muslim’s coach saw his raw talent and put him in the top sanda training class. In 2003 he entered his first World Wushu Championships in Macau, China and fought the famous Chinese sanda star Liu Hailong. He lost, in a closely contested bout, but his talent was noticed by everyone. Two years later he fought in the World Wushu Championships in Vietnam and won gold, defeating the fighter from Iran in the final round. Now his star was rising fast. 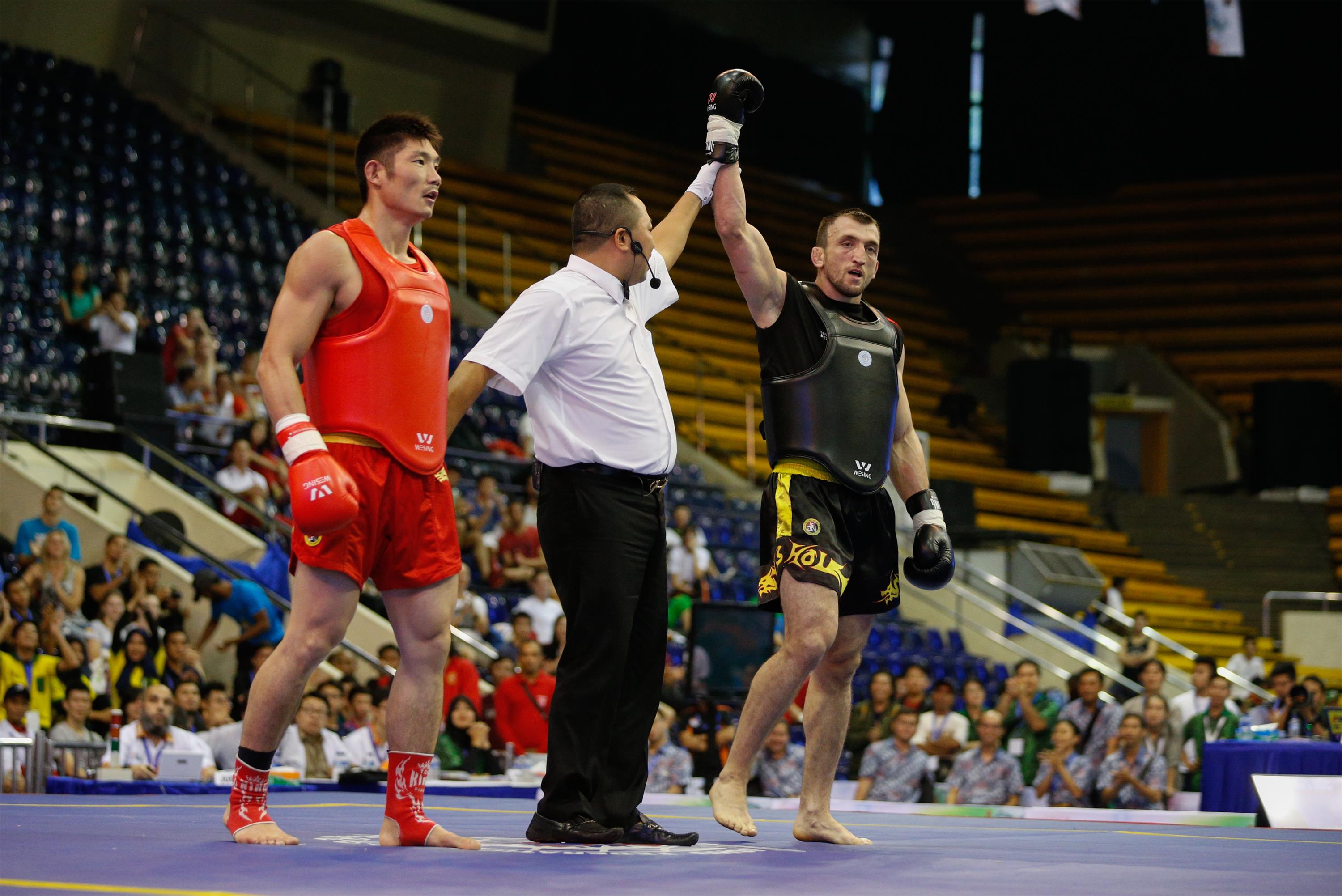 After winning the gold medal in 2005 in the 8th World Wushu Championships in Hanoi, in the 80kg division, Salikhov was invited in 2006 to fight in China’s famous “King of Sanda” competition in Chongqing. The promoters didn’t imagine he would win his weight division, much less the entire tournament – but Salikhov was on fire in the ring. He defeated his 80kg opponent, and then, to be the “King” of the entire tournament, defeated the favored heavyweight competitor, and became the first (and only) non-Chinese fighter to win the “King of Sanda” title. Afterwards Salikhov skyrocketed to fame in China and has, ever since, been a beloved sports figure there. Crowds surge to get autographs and photos, with police holding them back. Becoming a sanda star in China also won him deep and lasting respect throughout the wushu world. “Now,” he says, “they call me “Lao Mu” – roughly translated as old, or respected “master Mu(slim.)”

The next year Muslim won another hard-fought victory in China at the 9th World Wushu Championships in Beijing, where he had 5 tough fights and defeated Iran in the final round to win the gold. Then he fought in the 2008 Beijing Olympic tournament, held in conjunction with the 2008 Beijing Olympics, where he again won gold, alongside his Russian teammate Daria Tarasova who took the gold medal in taolu; this double victory not only made Russia proud, but it also firmly established the country as a superpower in wushu. He would go on to win another gold in the 11th WWC in Ankara in 2011. 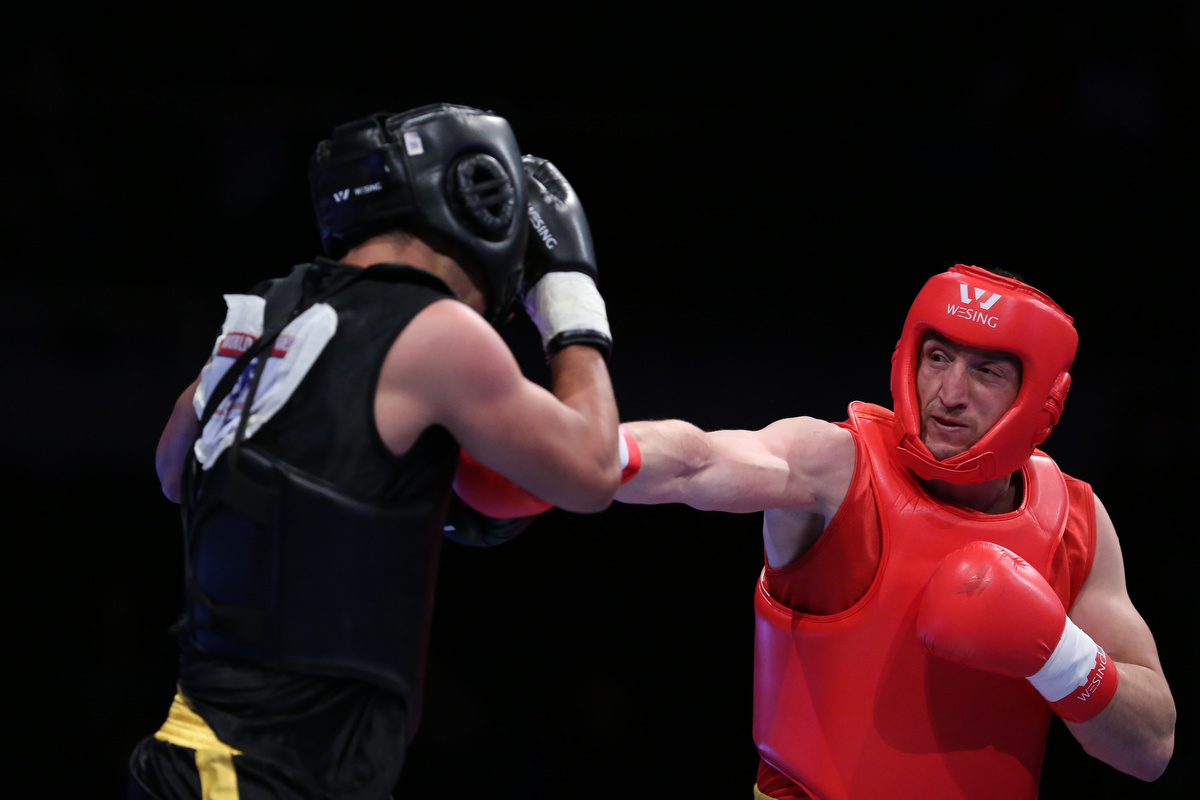 In 2009 his life changed. Muslim got married and then had a baby daughter. “The night my daughter was born,” he recalls, “I was fighting in Moscow in a Russian military tournament. I was fighting for the Russian police. I fought very hard, because I knew my wife was in labor at the same time. I won, and then ran to my phone, and got the call from my wife that we had a baby girl. When I became a father, I felt like I became a champion again, for the first time all over.”

As a new father, Muslim decided he needed to better support his family. So he decided to move on from amateur fighting to become a pro fighter in the MMA. He began to train in different styles to increase his fighting arsenal, moving to Thailand for awhile and beating the top Muay Thai fighter Pattaya in 2012. “I tried all the martial arts,” he says, “wrestling, jiu jitsu. I do everything.” 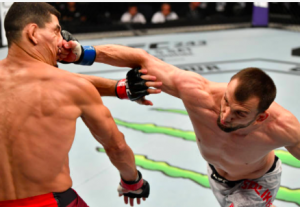 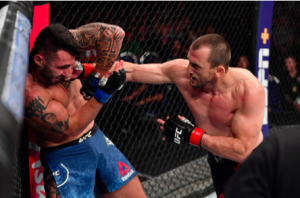 “But sanda is my style,” he says, “and I am bringing sanda to the MMA, really, to give it more recognition around the world.” His new role as a “sanda ambassador” brings a powerful boost of promotion to the sport of wushu to spotlight it on the world stage.

Although he was expanding his MMA skills, Muslim says, “Sanda is in my blood.” In the 2013 World Combat Games held in St. Petersburg Muslim won the gold medal to wild cheers and applause from his proud countrymen. In 2015 he fought in Jakarta at the 13th World Wushu Championships, where he won his 5th gold medal, both a personal lifetime goal and a WWC record no one yet has broken. 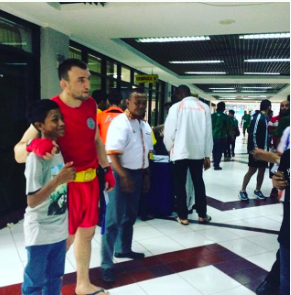 Salikhov’s natural succession from amateur sanda to professional MMA — notably in M1-Global and China’s slick Kunlun Fights — vaulted him to the ranks of the world’s top Dagestani professional fighters, an orbit which also includes his contemporaries UFC featherweight sensation Zabit Magomedshapirov and PFL heavyweight champ Bozigit Ataev – both of whom are also former sanda champions. Muslim notes, “Now Dagestan is like MMA Republic.” He was signed to the UFC in the welterweight division in 2017, and now has a total MMA record of 16-2, and UFC record of 3-1. Muslim has thrilled live audiences in China, USA, Abu Dhabi and Singapore, and shown off his inimitable sanda-based style to millions of viewers worldwide on UFC broadcasts. In nearly every UFC interview he mentions sanda as the foundation for his powerful and often spectacular fighting techniques, which not only promotes wushu to a wider audience, but also underscores how dramatically effective sanda is as a fighting discipline.

Today Muslim lives in his Dagestan hometown Buynaksk with his wife, son and daughter, only a few blocks from the wushu school where he learned sanda as a child. He trains in Dagestan, and around the world, full-time for his upcoming UFC fights; and through experience with different coaches and sparring partners, he is constantly refining his fighting talents, techniques and strategies. Although he is now a national celebrity, with requests for photos and autographs wherever he goes, Muslim remains humble, down to earth, and generous with his time. He can often be found in the gym training upcoming younger fighters. As his legacy continues to evolve, Muslin Salikhov remains a true global sports hero, inspiring a new generation, and continuing his unofficial role as sanda ambassador to the world.