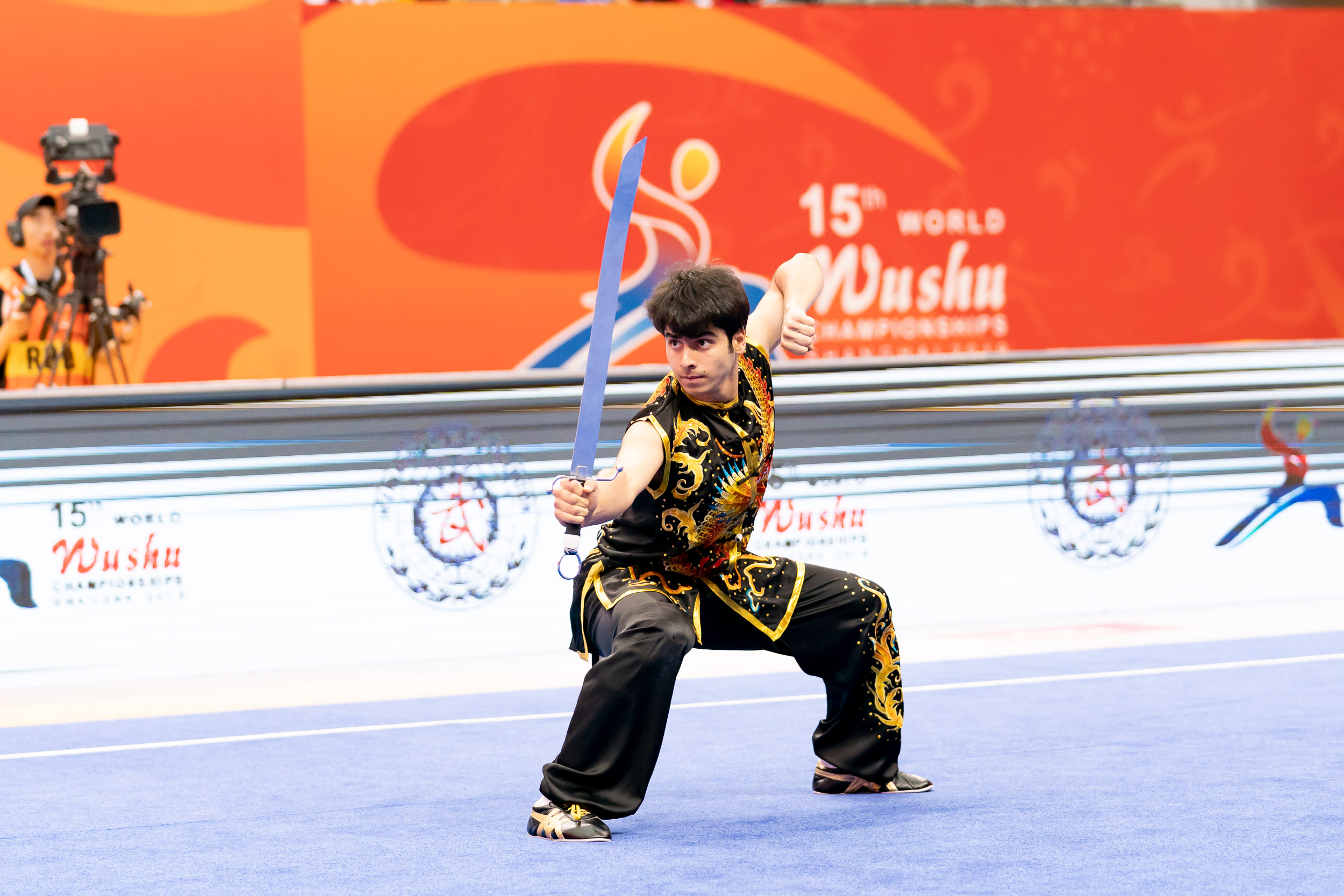 In a joyous moment for Iranian wushu, Mohammed Foroushani won the Men’s nandao gold medal at the 15th World Wushu Championships in Shanghai. Iran’s sanda team has amassed dozens of gold medals in their dominance of full contact fighting, and the Iranian duilian team is famous for it’s winning golden performances, but this marked the historic first individual gold taolu medal for the Iran Wushu Team. When his name appeared at the top of the final scoreboard, the entire Iranian team erupted with screams of joy and wild applause.

Dr. Mahdi Alinejad, President of the Iran Wushu Federation, remarked afterwards, “The taolu events at the 15th World Wushu Championships have been a big and historic moment for our team, and happily we got our first gold medal in an individual event. Previously we had only won gold in duilian – but this time an 18-year old boy from our team got a gold medal. I became so happy not only for our team but also for Mohammad, because he is obviously a hard-working person, and he is so polite and very well-disciplined. We invested a lot in taolu for the past 13 years and I’m so happy our investment is successful. This excites us to continue to develop taolu in Iran.”

We caught up with Mohammed after many congratulations from athletes, friends and fans, and asked him about how he began his wushu journey. “I practiced gymnastics from a young age,” he says, “until I was six years old, but then my coach suggested I try wushu. Right away I was enthusiastic about doing the forms. The movements were exciting, and I got a good feeling from practicing them. This made me want to continue and I practiced more and more.”

Mohammed recalls his experience in Shanghai. “It was my first time to travel to China,” he says, “and everything there was beautiful and memorable. Wearing my country’s name on my uniform made me feel proud and powerful. Participating in the WWC as a Iran National Team member made me very happy.”

“It was a totally different experience,” Mohammed adds, “which I never imagined before. It was a new and unbelievable feeling as it was my first time participating in a senior competition. I had very good feeling and at the beginning. I was very emotional, but very thankful for God’s support and kindness. I really liked competing with other athletes from different nations, and I enjoyed the atmosphere sharing the experience with my national team. They all congratulated me and were so happy when I won the medal.”

Mohammed said that while he was confident in his performance, it was still unexpected to win the gold.  He says, of the few hyper-focused minutes on the carpet, simply, “It was the right moment that all athletes are looking for and always trying to achieve.”  A short while later he was waiting backstage at the medal ceremony, his name was called, and he stepped up to receive his gold medal. “When I got on the podium and saw my national flag raised and the anthem is playing, and everyone in the competition hall standing up, I really felt very proud, and it was like that moment would never end.” 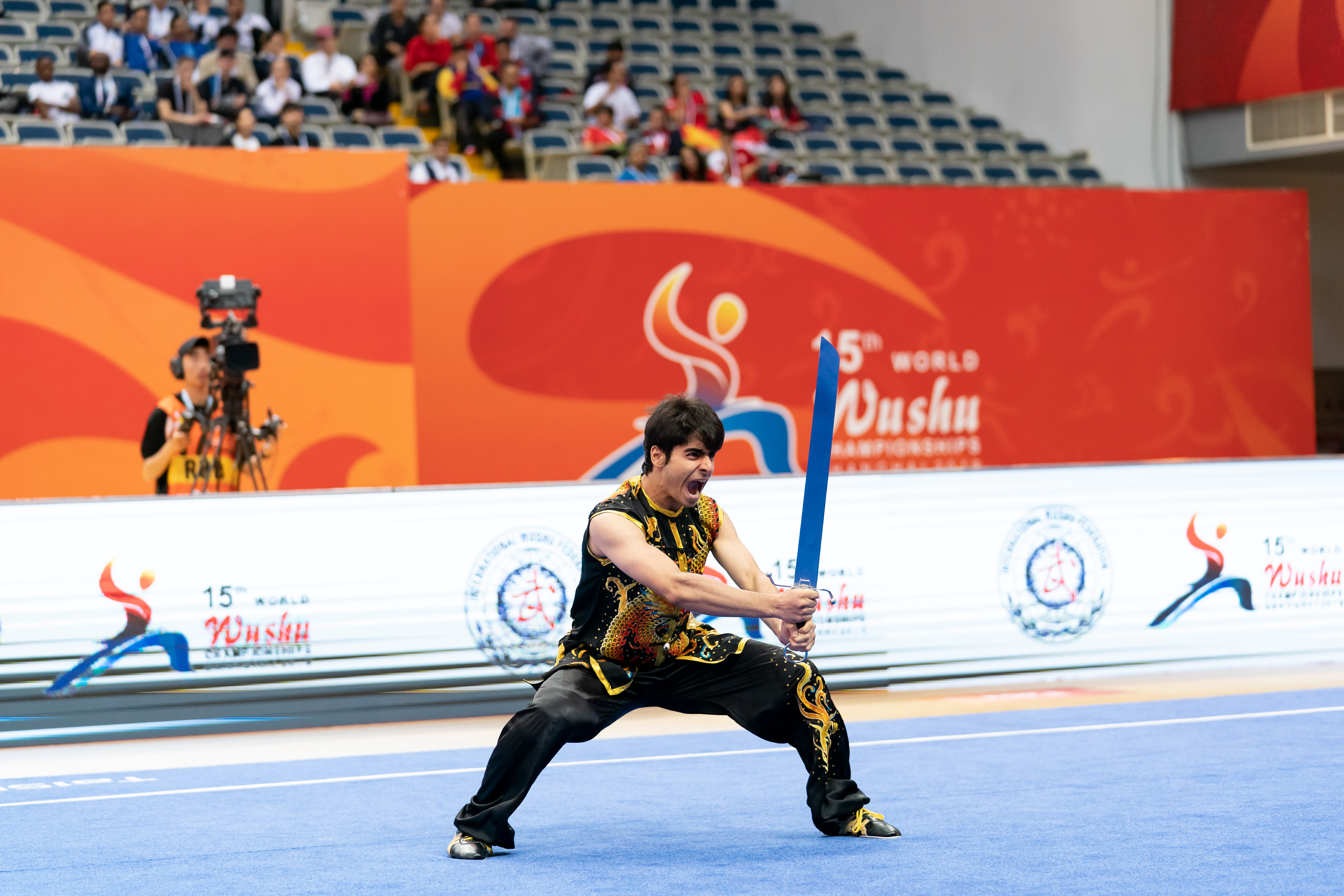 Nandao is a popular taolu discipline both among athletes and spectators, with lots of high-level competition. Mohammed explains, “I find nandao interesting because I can use my ultimate speed in this form and can jump properly as I really love to. I practice for 3 hours per day which is includes fitness and technical training. The hardest challenge is jumping. I try hard to improve my jumps in better height and quality.”

Mohammed’s discipline in his training extends to his training diet as well. He eats a big breakfast and, “For dinner,” he notes, “I eat mostly fruits and vegetables, sometimes meat and chicken, and very few carbohydrates. I never drink coke. I never eat fast foods.  I avoid junk foods like potato chips, or crisps, cheese puffs and cake and sweets. It’s funny, but I even don’t eat my own birthday cake!”  One the dishes Mohammed is passionate – and quite knowledgeable about – about is an Iranian classic. He tells us, “I like Iranian traditional dishes and one them we call Fesenjān. Fesenjān is an Iranian stew (a khoresh) from Gilan province, Iran. It is part of the dinner table on Shabe Yalda when families come together to celebrate the longest night of the year and the beginning of the winter. It is flavored with pomegranate paste and ground walnuts, and spices like turmeric, cinnamon, orange peel, cardamom, and rosebud. It is traditionally made with poultry (duck or chicken). Fesenjān can also be made using balls of ground meat or chunks of lamb. Depending on the recipe, it can have a sweet or sour taste. Fesenjān is served with Iranian white or yellow rice (polo or chelo).”

The Iran Wushu Federation offers its athletes a great deal of support and encouragement; it is a deeply motivated and involved organization that has invested heavily in wushu in the past decades and helped nurture Mohammed’s wushu dreams. He is close to his coach also, and quickly credits him as a cornerstone of his success. “My personal coach is Mr. Mostafa Goli,” he says, “and through all difficulties and also in happiness he has stood by me like a rock. He always makes me calm with his words, and I try to share all my success with him.”

Wushu is also a bit of a family affair. “Three of my cousins are in wushu,” he tells us, “and they were my coaches too. One of them thought I can not win the gold medal in WWC, but another cousin believed I could win the medal in Shanghai — and I can say he was the only one thinking like this.” 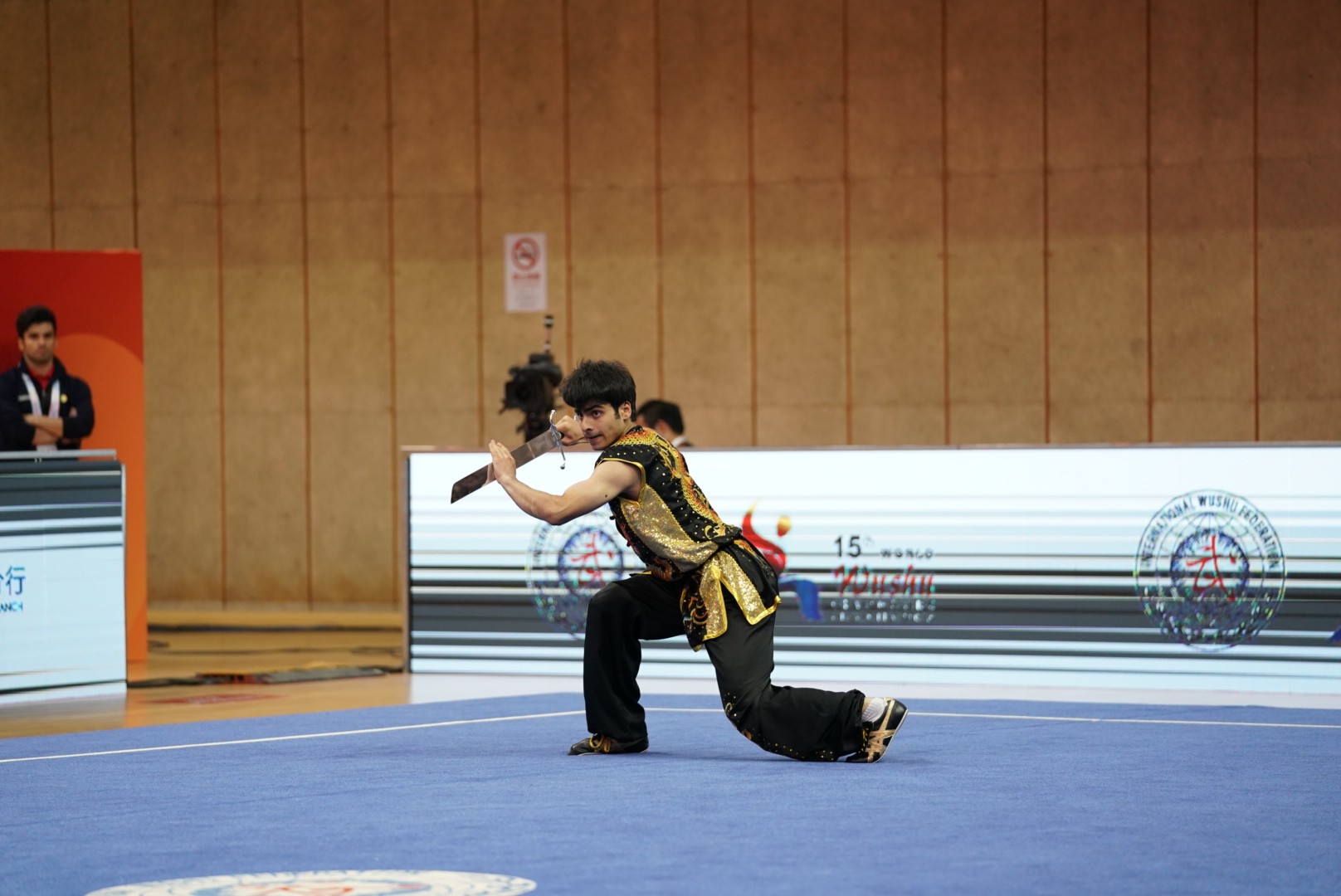 Having stepped up to a new level, Mohammed now wants to pass this belief forward, and help promote wushu even more in Iran. “My greatest honor,” he says with feeling, “is that I’m from Iran and could be a good representative for my nation in different championships. I believe by winning the medal in WWC I could change people’s view of taolu in my country. I could prove to everyone that we can get a gold medal in taolu too. Iran sanda is the world’s most powerful, but I believe with more work and hard training and using talented athletes we could become a world power in taolu too. My hero in wushu is Farshad Arabi. Today in Iran wushu is no longer an unknown sport – now everyone knows it.”

As his training continues, Mohammed is also focusing on his study.  And his personal wushu dreams? “I love the Olympic Games,” he says, “and it’s exciting that recently wushu joined the Youth Olympic Games. I’m afraid I will be too old and won’t be able to compete in these Games in the next years, but I have big hope to compete in the Olympic Games one day. My next favourite event is the Asian Games – and I am counting days to attend the next ones! I want to win medals there, and also in several more World Wushu Championships. If I can participate in the Olympics, I’d hope to win a medal there too.” 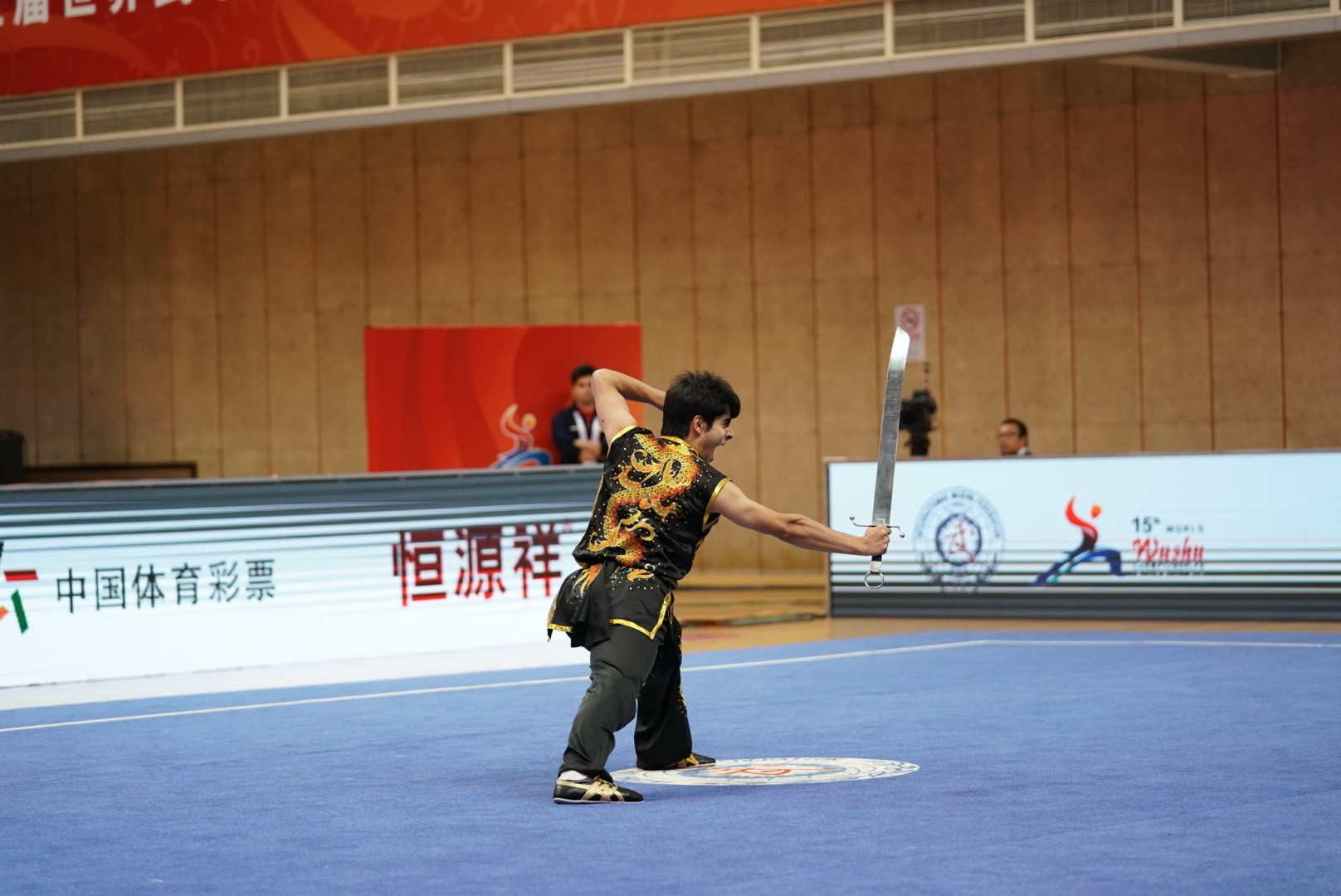