One of Egypt’s premier athletes is Amr Ibrahim Abdelraham Mahmoud Kasem, who first caught the sport world’s eye competing as a youth at the 2014 Nanjing Youth Wushu Tournament where he won first place in gunshu. He has been a member of the Egyptian National Wushu Team for more than 10 years, and he is one of Africa’s top wushu stars, greatly helping with his talent, enthusiasm and international success to build and develop the sport of wushu on the African continent.

Like many children in his village, during the summers Amr would go to the city’s youth sports center to play sports, and this is where he discovered wushu when he was five years old. When he was 8, in 2004, he entered his first competition. “It was a national competition,” Amr says, “and I was competing in changquan. But I lost my orientation and of course my result was so bad!”

Undeterred by this first experience, Amr kept training and getting better and better at wushu, specializing in daoshu, gunshu and changquan, as well as shuangdao and duilian. He entered more Egyptian local and national tournaments, and made his international wushu debut in Kuala Lumpur at the 12th World Wushu Championships in 2013, where he gained experience and maturity  – and inspiration from a lot of amazing wushu.

By 2014, when he was 17, he qualified for  one of IWUF’s most prestigious tournaments, the 2014 Nanjing Youth Wushu Tournament. “It was amazing for me to go to China for the first time,” Amr says, “and at same time it was very difficult to compete with the best players in the world, and at this level.” Overcoming nerves and keeping his composure and focus, Amr scored an impressive 9.55 in gunshu to win first place in the event. 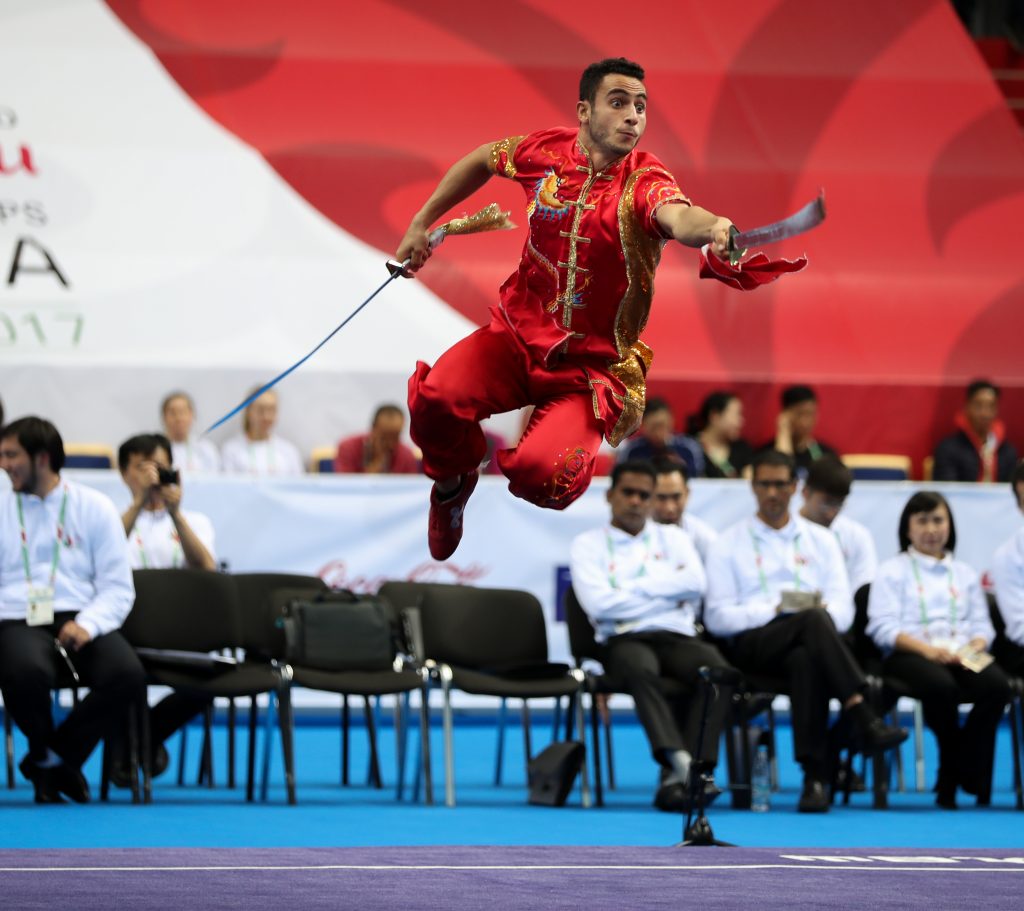 Returning to Egypt, Amr trained even harder with his coach. He won three bronze medals in the 2015 Mediterranean Wushu Championships in daoshu, gunshu and changquan. In 2017 he went to the 14th World Wushu Championships in Kazan and took 4th place in Shuangdao. Two years later in Shanghai at the 15th WWC he came fourth again, just narrowly missing the podium but displaying a stellar performance among a field of champions. 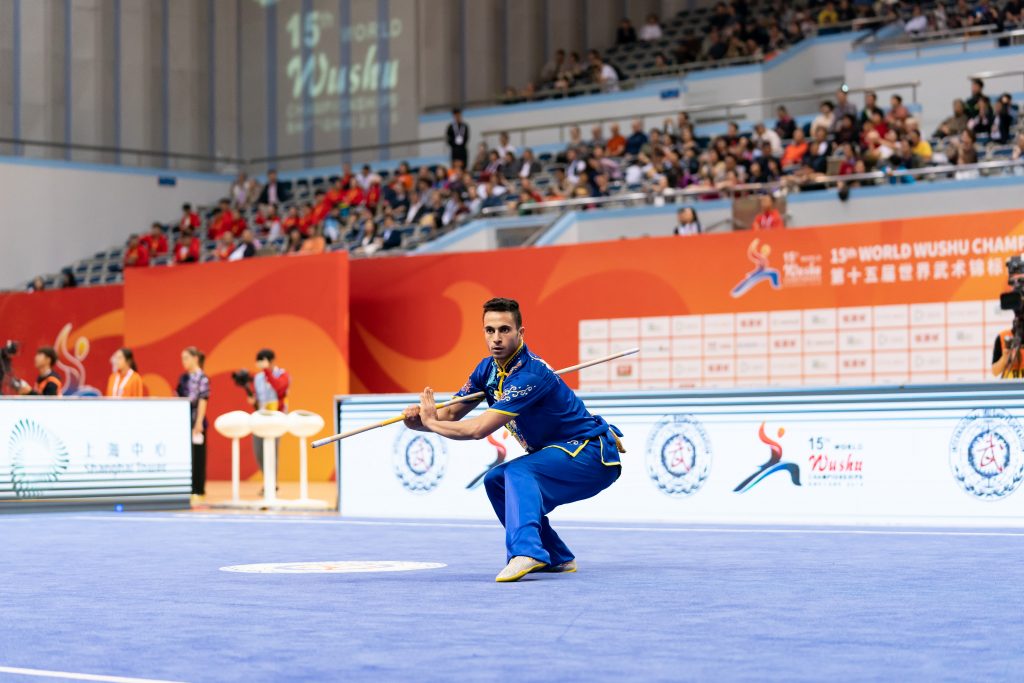 In between these international events Amr has won gold medals in three events – changquan, daoshu and gunshu – at four consecutive African Wushu Championships! “African wushu,” notes Amr, is not up to the level of Asia, but he says, “we now have a lot of good players and wushu is really starting to grow and develop here.”

Amr credits his coach, Dr., Mohamed Tawfik, with his wushu success. “I consider myself a lucky player,” Amr says. “because I have been always learning wushu with a coach who is, in my opinion, one of the best in the world. He started with me from the beginning until now. It is 20 years of precious experience. His training depends on scientific research.” 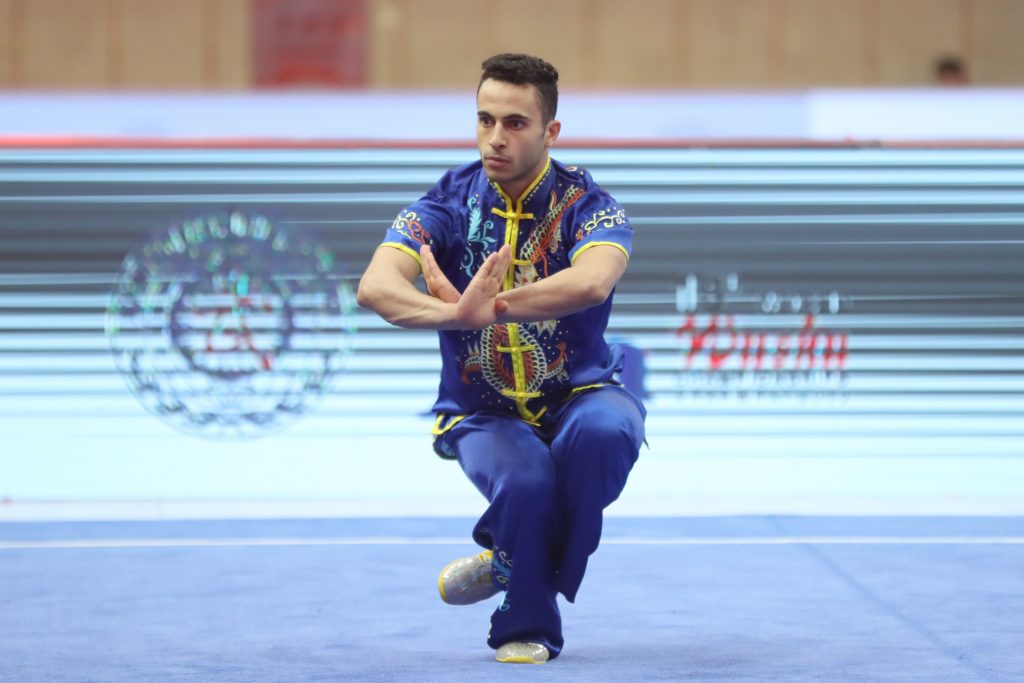 Wushu is not only Amr’s passion, but sport has also become his way of life, as he teaches at the Faculty of Physical Education at Menoufia University in Egypt. He likes reading and coaching wushu. He is close friends with many other wushu athletes, and is proud of being a national wushu team member, both junior and senior, for over a decade. “We travel and compete together,” he says, “and we always have fun and encourage one another.” Wushu, he believes, will always be an important part of his life.

As for competition, at 25, Amr just well may be at his peak. Training during the pandemic in both technique and endurance, he is looking ahead to upcoming competitions, especially the next World Wushu Championships where he will be in pursuit of a spot on the podium. “Simply,” he says, “I want to be one of the best.”