The Wushu Competition at The World Games 2022 was held July 12-13, in Birmingham USA, with 59 competitors from 26 countries and regions. After nearly a decade of the IWUF’s dedicated work towards wushu’s acceptance in this elite multi-sport Games, the Federation became a full member of the IWGA in 2021. Here in Birmingham — among 3,600 competing athletes, 30 unique sports, and over 100 participating countries making this 11-day competition an extraordinary experience — wushu was a standout in the glamorous global spotlight and gained many new enthusiastic fans.

The buzz of the competition reached its peak when Thomas Bach, President of the IOC, came to visit wushu the morning of July 13. While spending only two days at The World Games, his visit to the wushu venue at the Bill Battle Coliseum was a special honor, and excitement rippled through the audience as he arrived. He was accompanied by guests Jose Perena Lopez, President of the IWGA, and Max Bishop, Vice President of TWG 2022 Birmingham organizing committee. 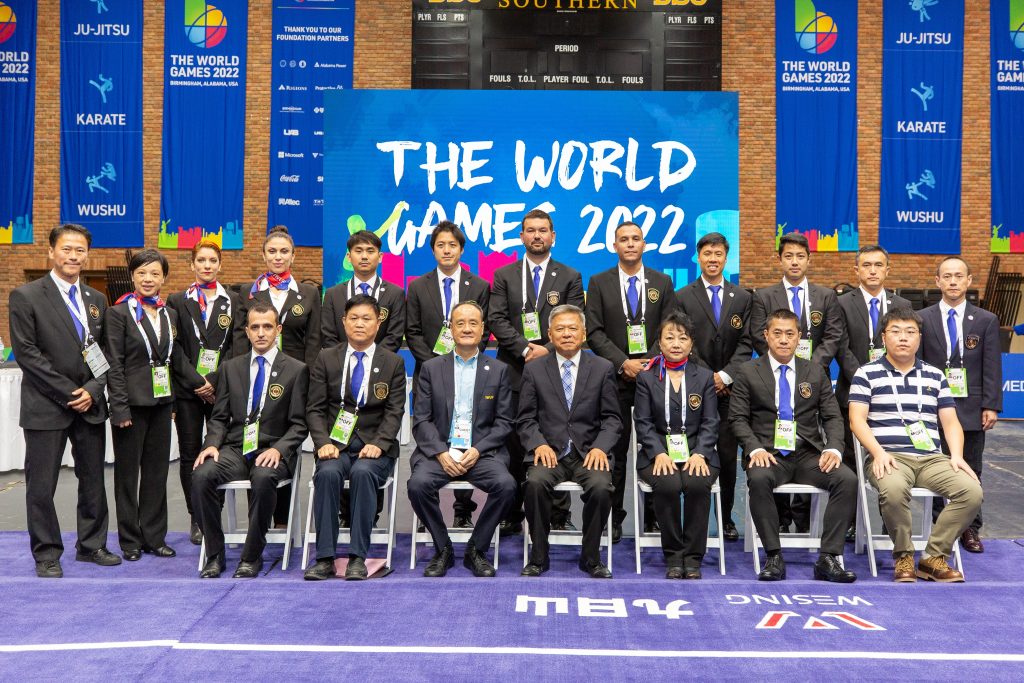 President Bach was greeted by IWUF Secretary General Zhang Qiuping and IWUF Vice President Anthony Goh, accompanied by several top wushu athletes from France, Brazil, and Senegal. Inside the venue the IOC President took a front row seat to enjoy the wushu action at full tilt. After clinching the gold medal with a dazzling women’s changquan performance, China’s top champion Xiaoxiao Lai came to the stands to have an animated conversation with President Bach about wushu and The World Games. The guests then went outside, where President Bach, a former Olympic fencer, took up a taiji sword to exchange some swordplay moves with Xiaoxiao, to great enjoyment and applause of the gathered crowd. They ended the lively martial session by exchanging the wushu and fencing salutes of respect, and Xiaoxiao then presented the taiji sword to President Bach on behalf of Gou Zhongwen, President of the IWUF. 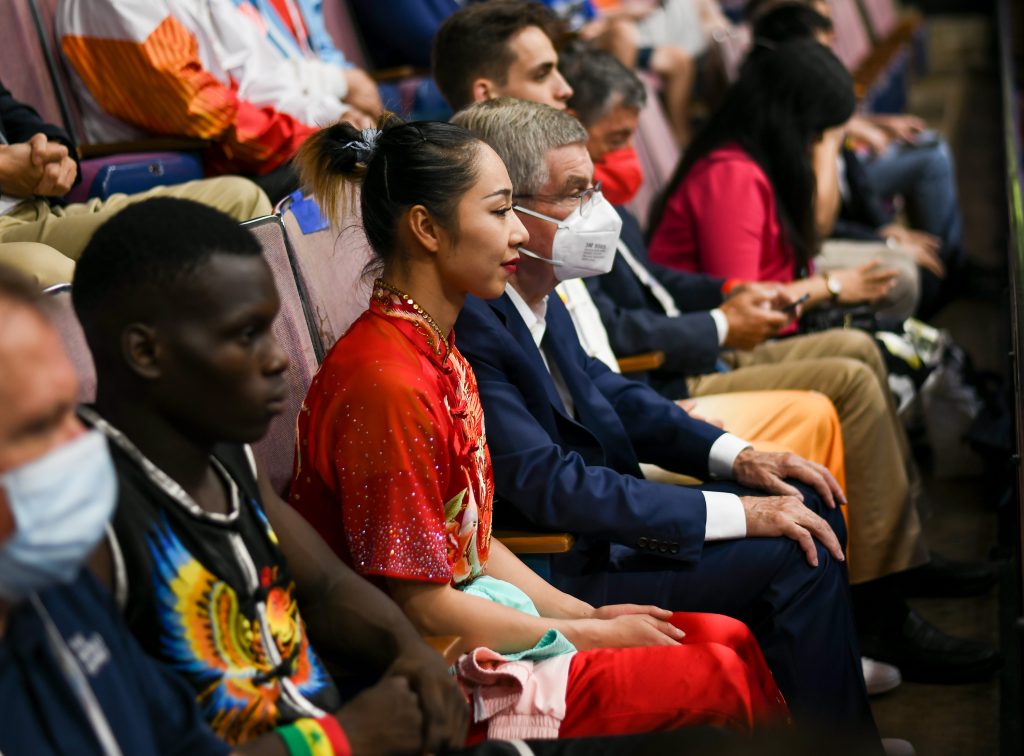 Unlike larger events like a world championships, this World Games wushu competition was more intimate, streamlined and elite, with 5 female events and 5 male events limited to 6 competitors each. The majority of the qualification spots were determined through the 15th World Wushu Championships results, and the remaining spots distributed as wild cards. This made each event go dazzlingly quickly, offering excitement and a wide variety of action for the audience. Curious the World Games athletes from other sports, groups of summer camp kids, and Birmingham locals looking for a dazzling sport show were not disappointed. Many saw wushu live for the first time, widening the sport’s appeal, and priming a new generation of potential athletes.

On Day 1, July 12, Men’s changquan started the action off with a fierce field of talent, with the triple-gold Shanghai World Wushu Champion Edgar Xavier Marvelo topping the podium and winning the first medal of the Games for Indonesia with a 9.533 score. Korea’s Hasung Lee took silver with a powerful performance, and Roman Reva from Ukraine drew huge applause for with his skilled and soulful performance for bronze. 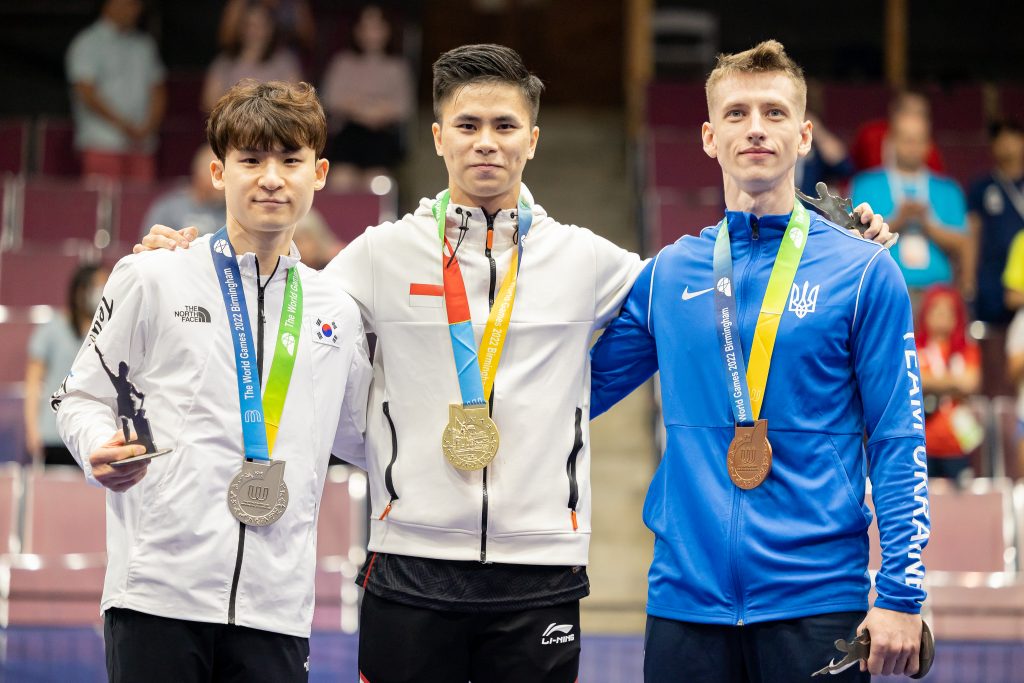 Then the quest was on for the combined events for men and women – one morning event and one evening event. The women’s events for jianshu and qiangshu were action packed as competitors’ spears flashed furiously, and staffs whipped through the air at lightning speed. Vietnam’s Thuy Vi Dong emerged victorious to claim the gold medal, followed by Winnie Cai of Canada taking silver, and Heeju Seo from Korea stepping up for bronze. 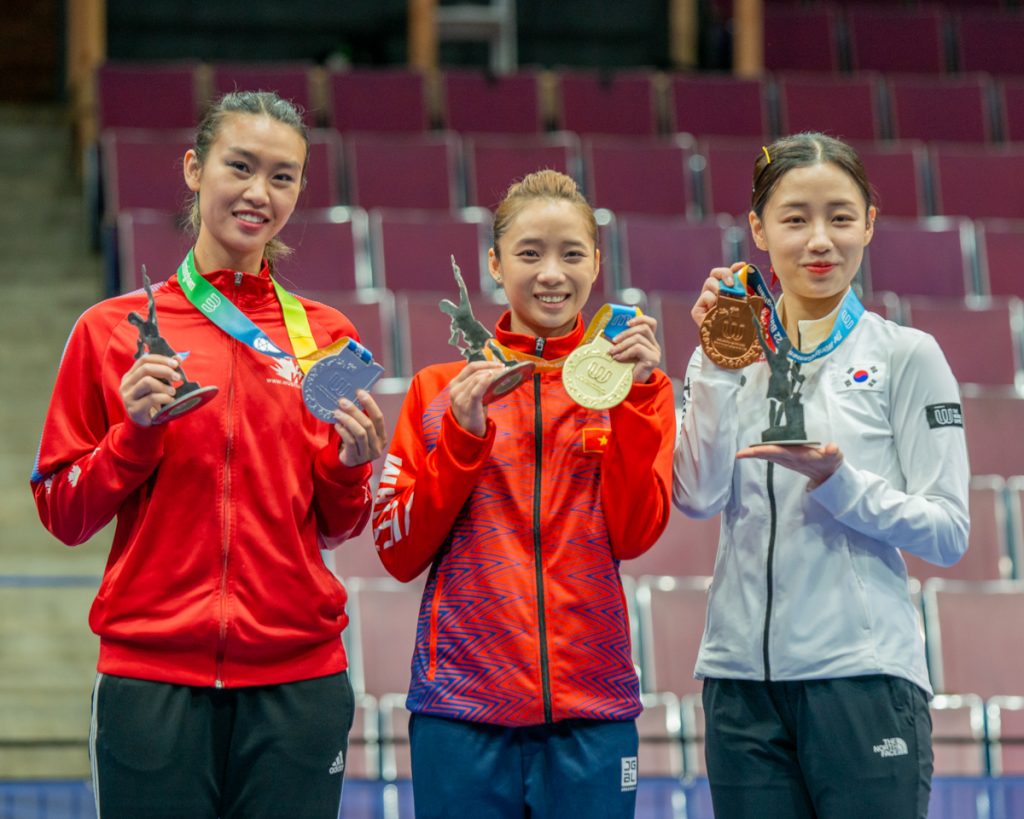 Men’s daoshu and gunshu events changed the pace with a different power and precision. All six athletes gave stunning performances earning high scores. However, China’s Zhaohua Wu truly set the carpet on fire earning a score of 9.627 in gunshu, and a 9.657 in daoshu, to place a decisive first and claim the gold. Singapore’s Jowen Si Wei Lim fought his way valiantly to the silver medal, and France’s charming Loan Drouard showed elegance and artistry combined with precision to win the bronze. 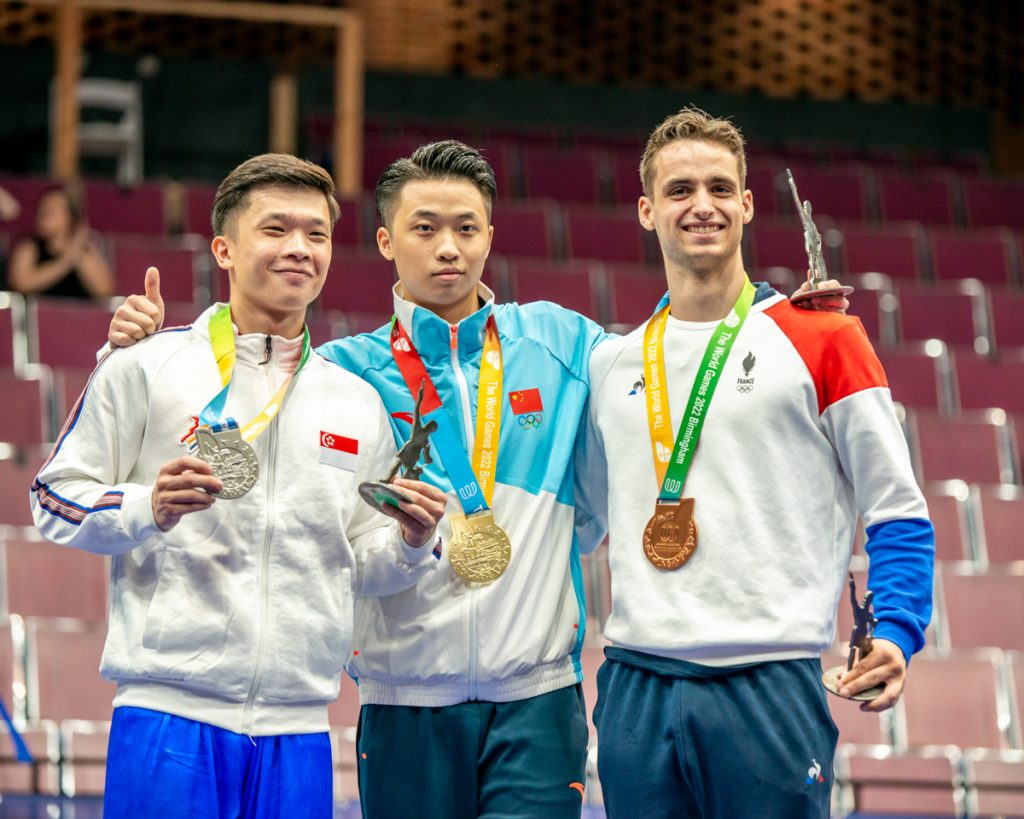 Nanquan and nangun are always crowd pleasers with their dramatic expression, and the local Birmingham audience roared with cheers and applause once the carpet got warmed up for this event. Three veteran champions — Zhongxin Liu from China, Harris Horatius from Indonesia, and Po Wei Lai from Chinese Taipei — ultimately fought it out for podium supremacy with incredibly close scores; gold went to China, silver to Indonesia and bronze to Chinese Taipei.

The women’s taijiquan and taijijian capped off the competition of the first day, and the audience and the judges were wowed by Basma Lachkar’s incredible power, strength and dynamism in both her taijiquan and taijijian routines. This athlete from Brunei Darussalam lit up the stage with high leaps, strong stances and a confidence that riveted all eyes on her during her routine. She won the gold, with Chinese Taipei’s Pei-Hsun Liu is close pursuit for silver, and Singapore’s Vera Yan Ning Tan gracefully grasping bronze. 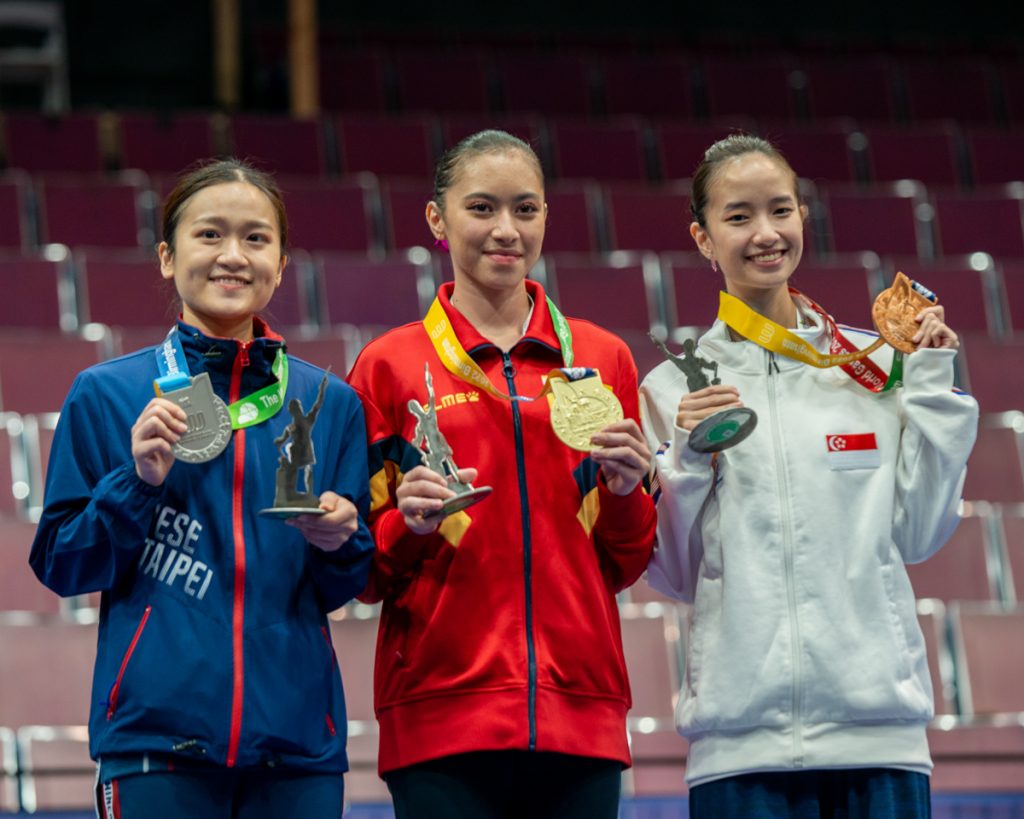 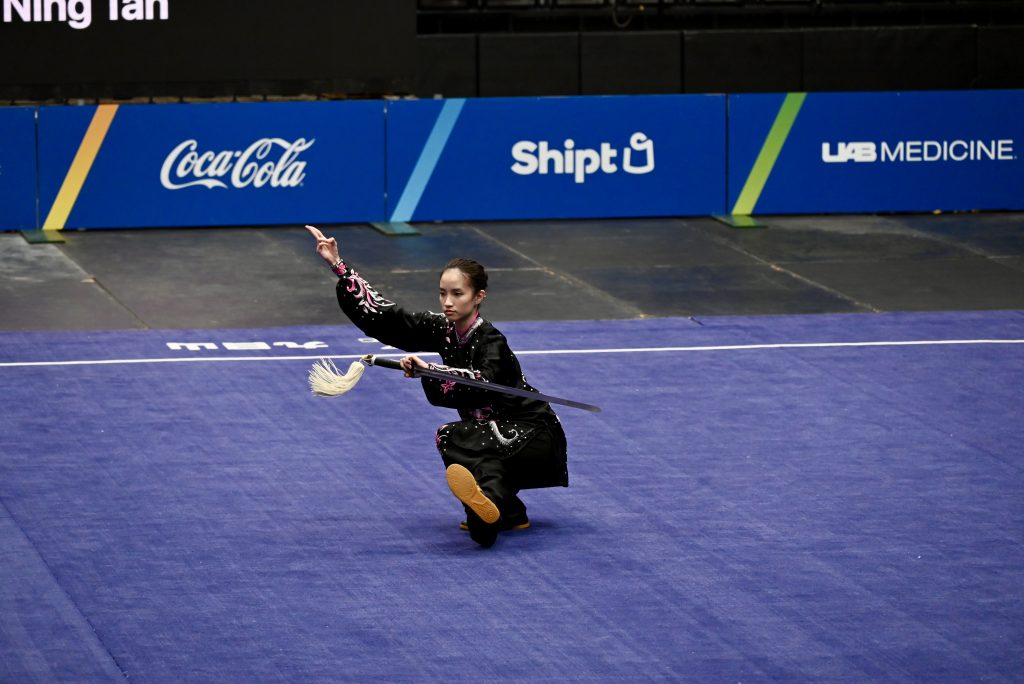 Basma’s performance, and the fact that Brunei was participating in The World Games for the first time, was so striking that the media from The World Games came to interview her, and her photo and story headlined the Highlights of the World Games 2022 Day 5, bringing extra attention to wushu at this event. https://www.theworldgames.org/news/2022-32/Highlights-of-The-World-Games-2022-Day-5-2359

The next day, July 13, started out with electric energy by the visit of IOC President Thomas Bach to watch a good portion of the morning wushu competition. If this made the athletes just a little bit more nervous, they didn’t show it, and all maintained perfect composure. Women’s changquan debuted the day’s program, and the golden warm-up dust left on the carpet by China’s star champion Xiaoxiao Lai sparkled even more brightly under her feet as she dazzled the crowd with her trademark technical precision, power, and elegant expression. All eyes in the arena were riveted on her performance, and even newcomers to wushu could not help but feel they lucked out mightily to watch a performance of this stature. The energy enhanced all the performances in this changquan event, as Indonesia’s Nandhira Mauriskha’s strong performance earned her a silver medal, and Brazil’s longtime dedication to wushu sport paid off as Michele Santos clinched the bronze. 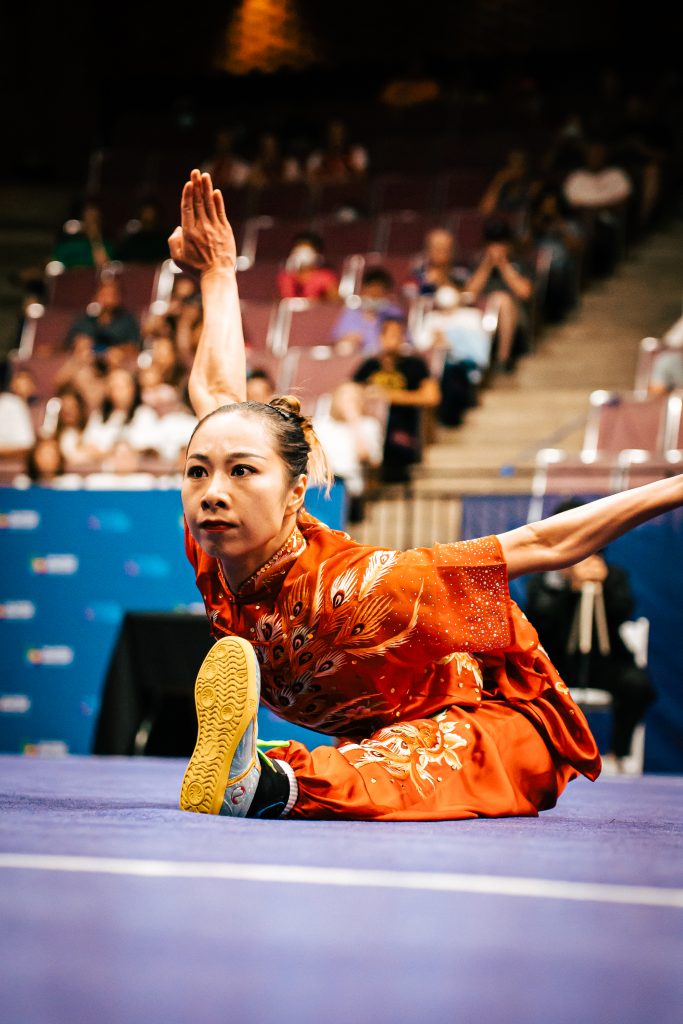 With her mission on the carpet accomplished, Xiaoxiao was seated with IOC President Bach and they watched several more events together, animatedly discussing some of the finer points of wushu. Men’s jianshu and qiangshu offered another great weapons showing, and now it was time for athletes from Europe and the Americas to shine. USA’s Brian Wang brought his decade of USA Wushu Team experience to dazzle with both sword and spear to leap to the top of the podium, and Italy’s Alfonso Barbarisi demonstrated his charismatic Italian style; if his wushu was slightly reminiscent of Italy’s top wushu star Michele Giordano (who won the IWGA third place athlete of the year award for 2021) it is because Giordano has coached Barbarisi since he was a little boy. Happy to help create a new generation of champions in Italy, Giordano stood proudly by as coach at The World Games in Birmingham as the Italian flag rose for Barbarisi’s silver medal. And Canada would succeed in grabbing the bronze, as Jason Chen-Leung offered a beautiful performance to edge out strong competition from Great Britain, France, and Switzerland. 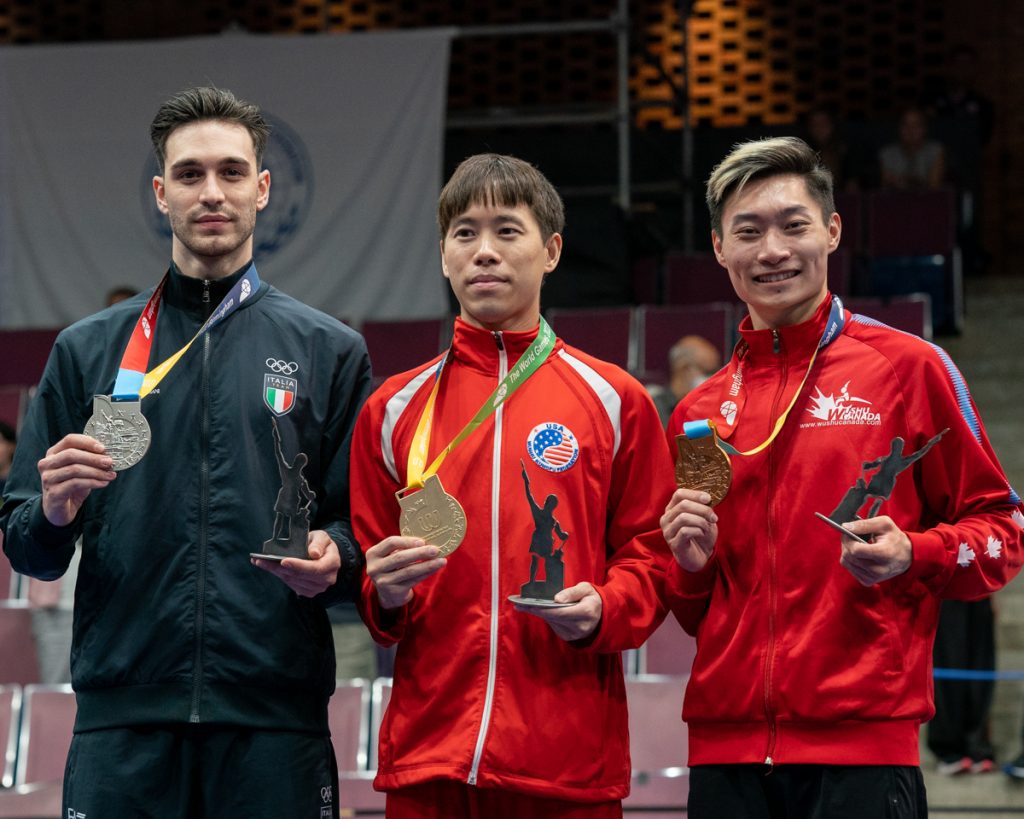 Another longtime USA Team athlete, Mia Tian, truly came into her own in Birmingham, putting on a sensational performance in both daoshu and gunshu, to claim victory on the top of the podium and give the home country audience a big reason to cheer. Massive applause also filled the arena for Alina Krysko of Ukraine, who felt the heartfelt audience support energize her sword and staff routines for a glittering silver result. Michelle Yeung, from Hong Kong, China followed with grace and precision to win the bronze. It is also worth noting that in these events the athletes of Mexico and Chile offered extremely fine performances showcasing notable up and coming talent from Pan America.

The competition for women’s nanquan and nangun brought even more high energy to the crowd as the superwomen of the southern styles took to the carpet. China’s Yaling Zhang rocked the house, winning the gold medal, to make China’s medal count 4 for 4 – all gold. Uzbekistan’s champion Darya Latisheva also gave standout performances, to take the silver. And Wing Yung Lee, from Hong Kong,  China clinched a second bronze for her team. 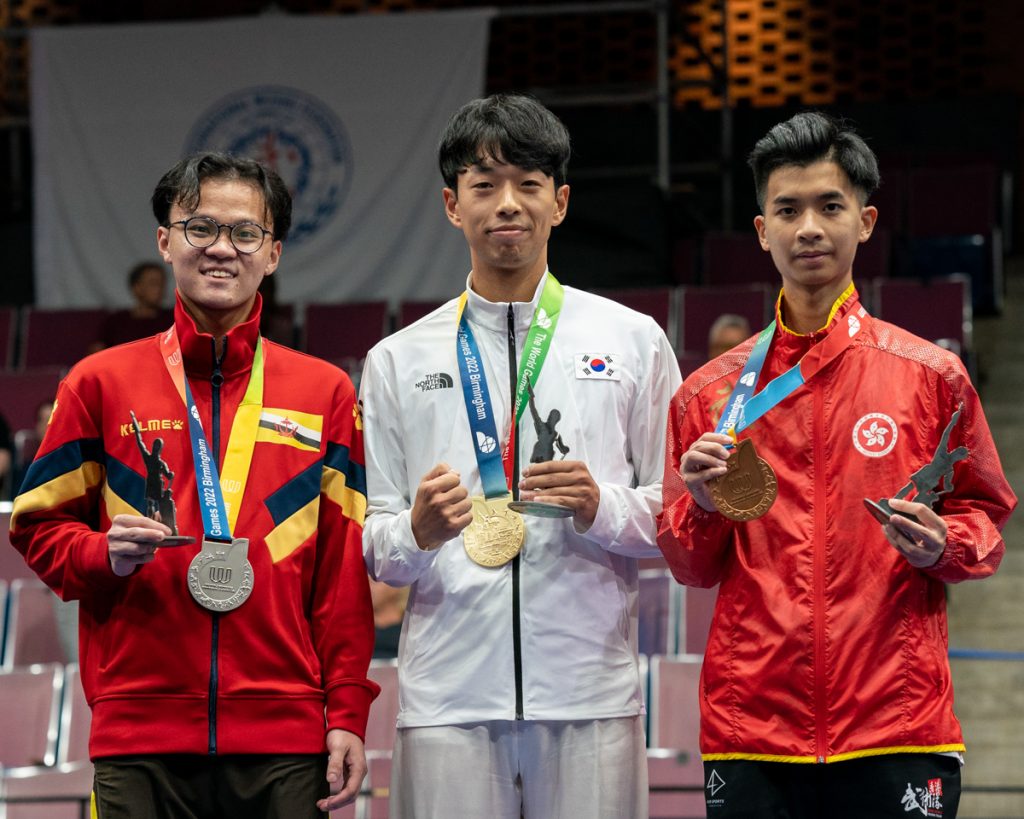 To end the events of the competition the men’s taijiquan and taijijian brought music and internal energy to the stage. In the morning taijiquan event, Brunei Darasallam’s Zheng Yu Hosea Wong had the top score, edging out Korea’s longtime champion from Korea, Wonhee Yu. But later that evening Yu’s high taijijian score was enough to combine and overtake the lead to win gold. Hosea Wong’s silver complemented his female teammate’s gold medal, and Chung Hey Yeung added a third bronze medal to his team’s hardware haul.

Earlier in the day The World Games announced that Xiaoxiao Lai was named as the female Athlete of the Day. With only two awards each day, and over 34 sports in Birmingham at the Games, this was another extraordinary honor for wushu. That evening  Xiaoxiao was presented at a formal ceremony on stage with the AOTD certificate and a beautiful gold compass engraved with the details of TWG2022 and the longitude and latitude of Birmingham, Alabama, USA. 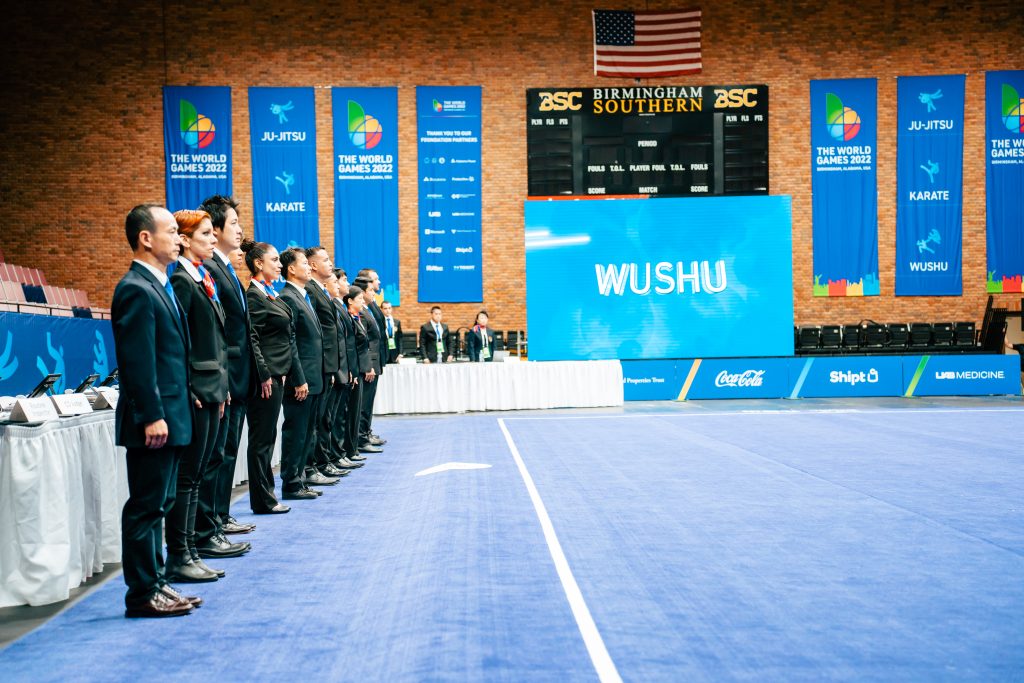 After the last medals were awarded, the winners put on a festive and gala wushu show, led by the Chinese team’s dynamic group demo, which captivated the crowd and drew cheers and applause. Thus, the wushu competition of the World Games 2022 ended on a high note. This World Games experience was especially meaningful as it reunited the wushu community for the first time since the pandemic shut down the sporting world. And for most participants, simply being together again at live competition was reason enough to celebrate, and offered opportunity to reflect on how much wushu brings to people’s lives. Emotion was strong as friends hugged and talked, and this created a special energy that helped contribute an extra, intangible quality to this event. The World Games not only marked a new, permanent home for wushu in the multi-sport competition world, but it also helped renew an energy rekindling passion and purpose for the entire wushu community.

The next edition of The World Games will be held in Chengdu, China in 2025.