Senegal’s Ousmane Gueye made history for the sport of wushu in his nation last summer at The World Games 2022 Birmingham. Not only was he selected as one of the globe’s elite athletes to compete in the prestigious World Games, but he was also chosen by IWUF to represent the continent of Africa in an historic meeting with IOC President Thomas Bach. This event was exciting for wushu, but it also celebrated the fact that wushu has now been chosen to be an official sport in the Dakar 2026 Youth Olympic Games — marking a significant advancement for the IWUF’s mission to see wushu merge fully into the Olympic movement. This is the first time the Youth Olympic Games will be organized in Africa, and as IOC President Bach has said, “With a young population and a passion for sport, it is time for Africa, it is time for Senegal.”

It was certainly time for Ousmane Gueye in Birmingham, putting on an energetic and exciting performance in nanquan and nangun. Ousmane’s first sport passion was football, which he played in Senegal as a child and teenager. But his brothers began to practice wushu, and Ousmane could not shake off the attraction he developed for the sport watching them practice. “I was a footballer,” he notes, “but they made me love wushu. I would go to their training sessions after my football matches, and it was in 2016 that I started practicing wushu, at the age of 17.” Ousmane’s football training has already made him fast, fit and coordinated, and he was able to translate these attributes to his newly beloved sport. But it turned out he also had a talent for it. “My initial training was very physical, with a lot of acrobatics and learning the forms. The more complex technical aspects would come later. My first competition was in 2017 during the first edition of the Dakar League, it was then that I understood that I could compete successfully with my peers.”

As his skills grew, competing in Senegal and in Africa helped develop Ousmane’s confidence as an athlete. He fell in love especially with nangun and nanquan.  “What I love about nanquan and nangun is the power, the determination and the concentration it gives me, as well as self-confidence.” 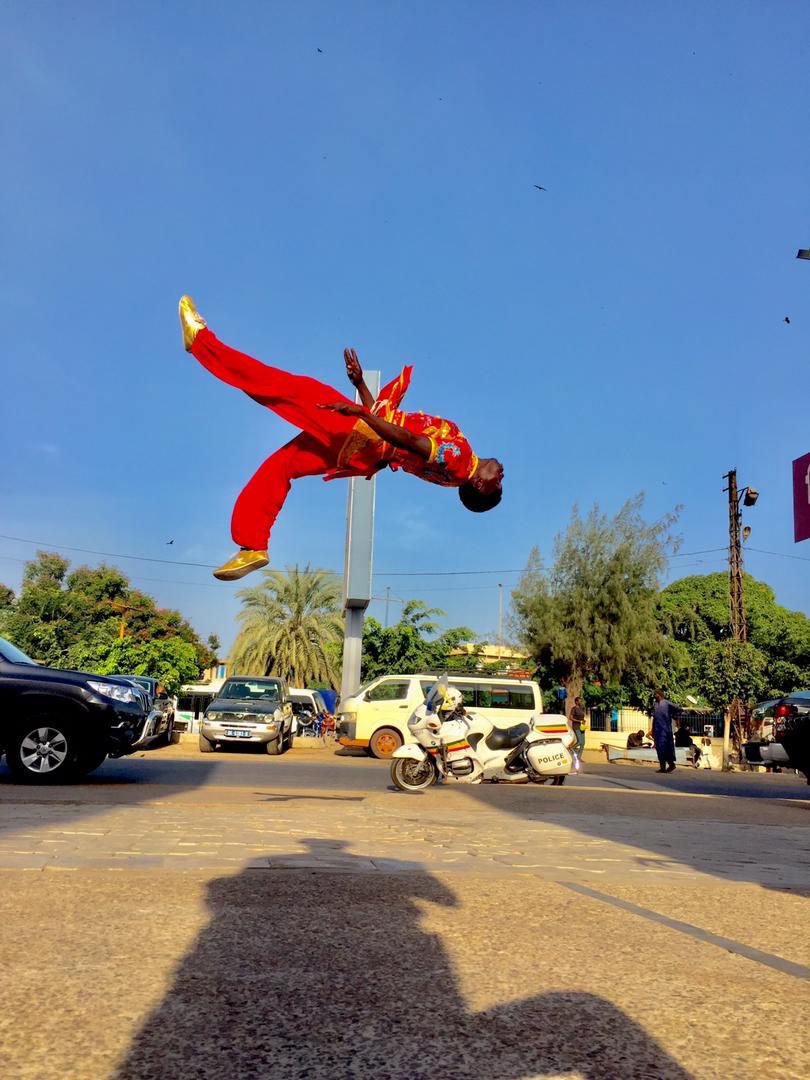 “Being part of the Senegal national team raised my technical level,” Ousmane recalls. “The technical aspects of wushu were the most challenging. It was very difficult and stressful but with the help of the coaches I was able to overcome hardships and wushu has given my life a great experience. Especially competing internationally, and at The World Games, it’s a dream come true because I gave myself body and soul to one day be able to represent my country everywhere and fly our national flag.”

Having the Senegalese flag next to his name as he competed on the stage at The World Games 2022 in Birmingham was a thrilling apex achievement of Ousmane’s wushu career. “First, “he says, “it was such a great pride to represent my country. It was a really amazing experience for me that I will never forget, and I learned a lot of things about competition at this level.” Ousmane faced strong competitors in his nanquan and nangun categories, going toe to toe with the world’s top athletes from China, Indonesia and Hong Kong, China. He says about that, “It is true that it was intimidating but I had only one objective — to succeed in my performances. My best memories still fresh in my mind are the applause of the public after my routines, and I made many friends with whom I keep in touch. To them I say, I will be back!” 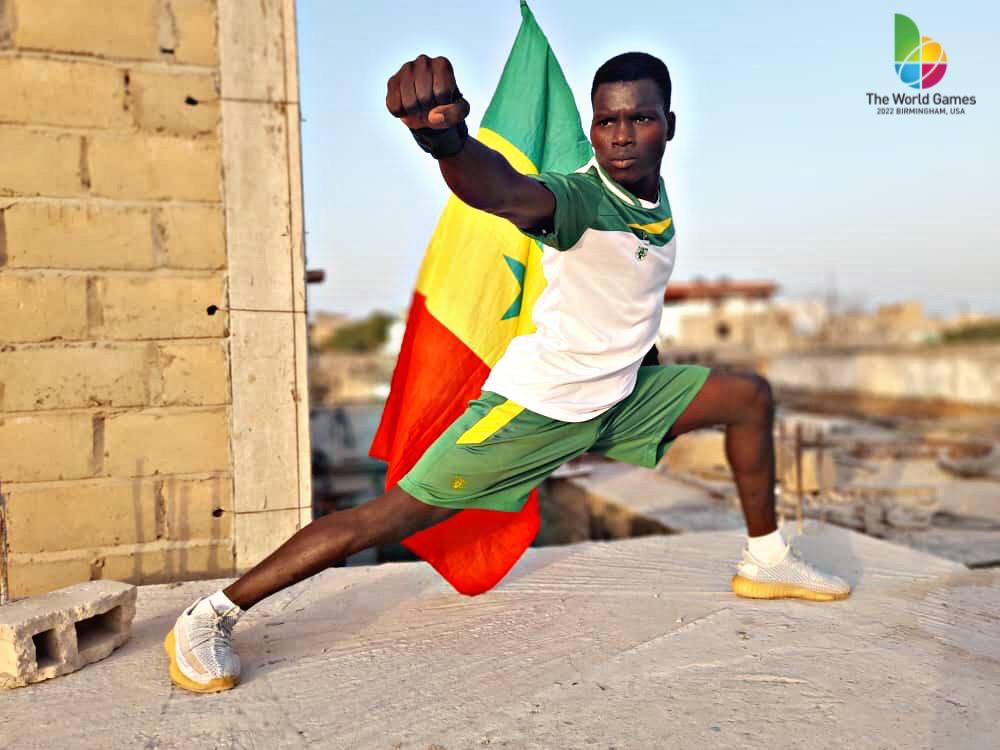 The excitement of the wushu event in Birmingham at TWG reached its peak when Thomas Bach, President of the IOC, came to visit wushu the morning of July 13. While spending only two days at The World Games, his visit to the wushu venue at the Bill Battle Coliseum was a special honor. After watching some of the competition, President Bach met outside the arena with IWUF officials and several top athlete representatives from China, France, Brazil, and Senegal. Senegal’s Ousmane, of course had the honor of meeting President Bach and chatting with him about wushu in Africa, and the anticipation of wushu debuting at the Dakar 2026 YOG. Ousmane says of this experience, “It was like winning the gold medal for me, because being selected among all the participants to welcome President Thomas Bach, I was in heaven.” 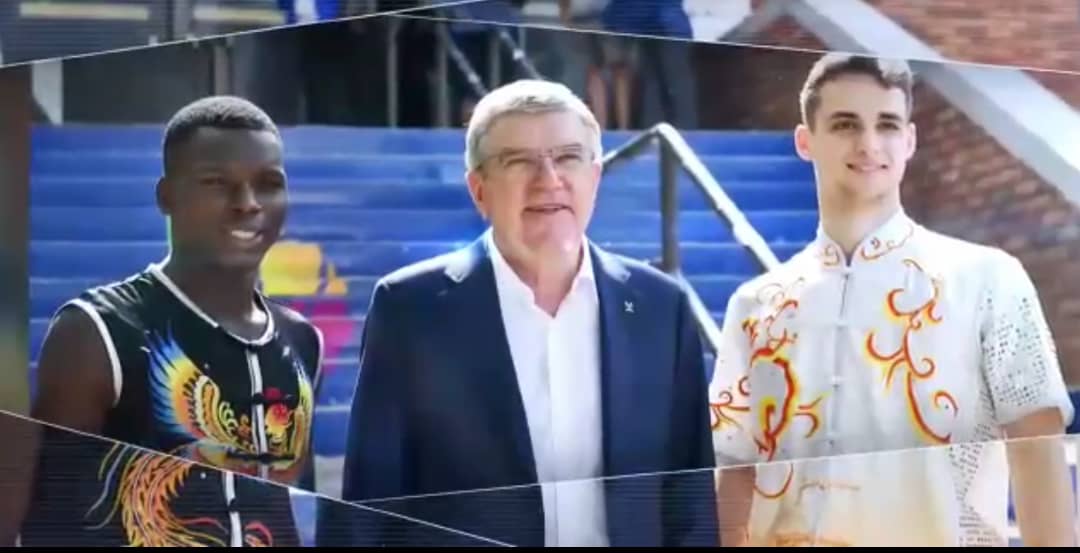 Back in Senegal, and with the pandemic on the wane and live wushu events about to fill the new calendar, Ousmane set his sights on training harder than ever. In between his work, as a welder, he trains 5 days a week, with sometimes two sessions a day. He says, “my training sessions often include a little cardio and I focus on refining the technical elements of difficulty after I do my forms. My coach — I will not stop thanking him — because he has accompanied me throughout my rising wushu career. He is very humble and professional, and he knew how to put me on track.” He adds, “I also have to thank my whole family, the Senegalese Kung-fu Wushu Federation, our president Maitre Ndiogou Gueye, and our national technical director Maitre Mamadou Fall, who spares no effort for the development of the wushu.”

Now, with his success, Ousmane also wants to give back, and contribute to the growing wushu movement in Senegal and Africa. With the World Games behind him, Ousmane is all in to help his nation’s younger wushu athletes prepare for the next Youth Olympic Games organized in Senegal in 2026. “It’s time,” he says with conviction, “for Senegal to shine on the top of the world wushu podium and people will not regret coming to Senegal.” 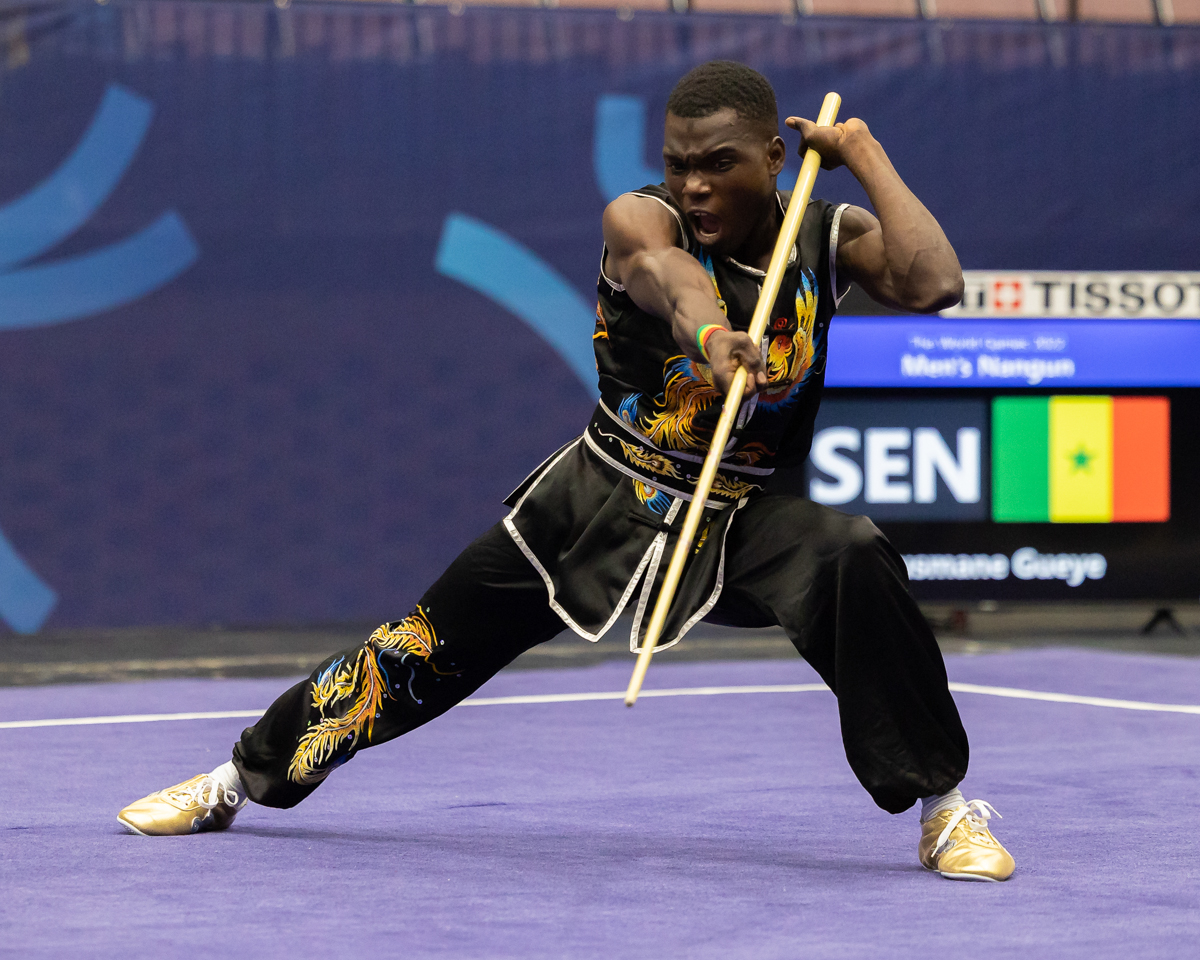 “I am very happy to see wushu develop in Africa, and in Senegal in particular,” Ousmane says, “because there were times in the past when the means and the equipment were too difficult to have. Now that we have mats and specific equipment I think that the development will take place much faster.”

Ousmane came back to his country from 2022 TWG a hero to Senegalese wushu, and he has discovered a passion for mentoring younger athletes, and instilling a passion for the sport in them too. “It is true,” he states, “that I am loved by young people, because I help them discover the beauty of wushu, and give them confidence. I am so happy to share my experience, and it is a pleasure to see them want to be like me and succeed in wushu. For the moment I am assisting my coach in the preparation of young people for the YOG 2026.” 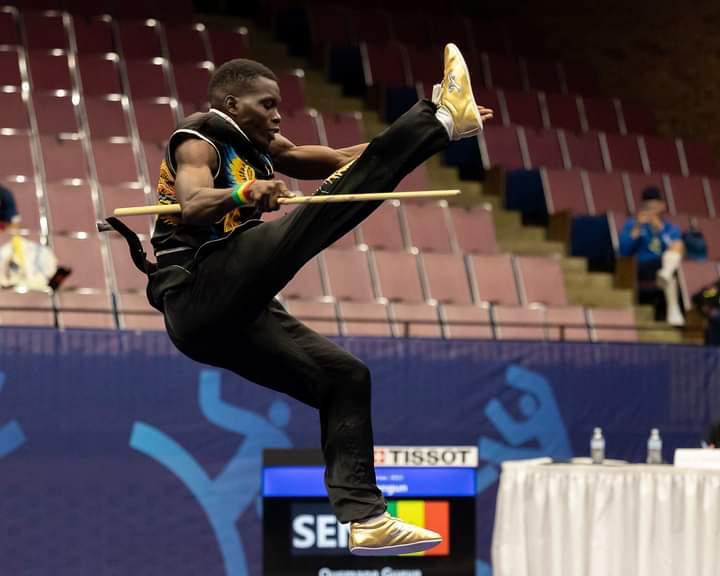 Ousmane believes that the 2026 YOG will undoubtedly help wushu to become more popular in Senegal and in Africa. “It’s time for more people in Africa to discover wushu,” he says. “Having a big, new competition, and promotion, and giving the opportunity to African countries to participate in this sport, allows for the development of wushu in Senegal and in Africa.” He also thinks social media will play a big role in letting more young people know about wushu. “I like to popularize wushu through social networks so that Senegalese see what is done in my country,” he says. 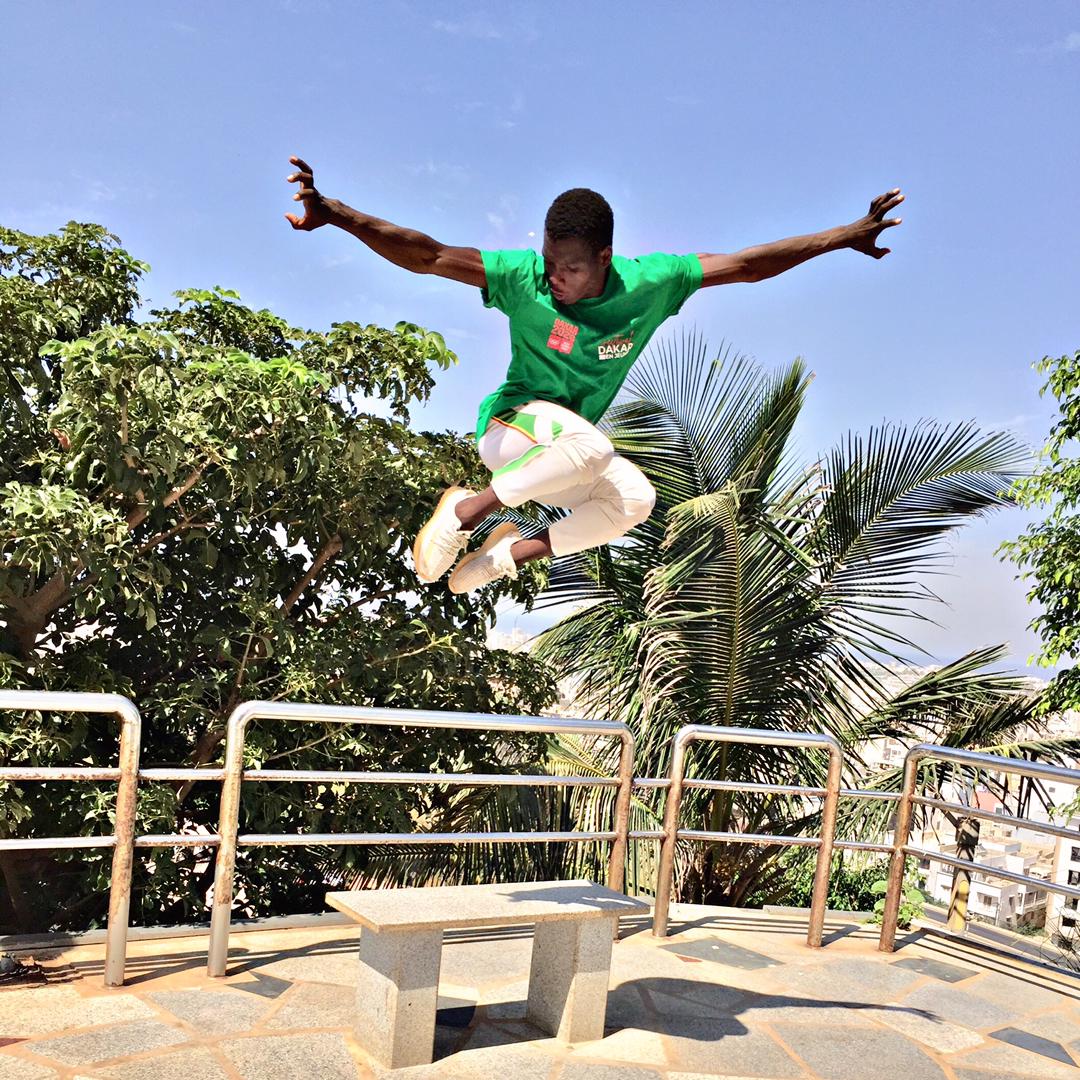 But wushu still offers Ousmane tangible sport ambitions for the future. “I dream of becoming African champion and world champion and then having my own club and sharing my wushu experience with children, “he says. And for now, he is training for the next 16th World Wushu Championships in the U.S. “I am counting on making a good showing there,” he says, “and hope to win two gold medals.”